The “invisible” amphibians hide in plain sight by concealing red blood cells in their liver. 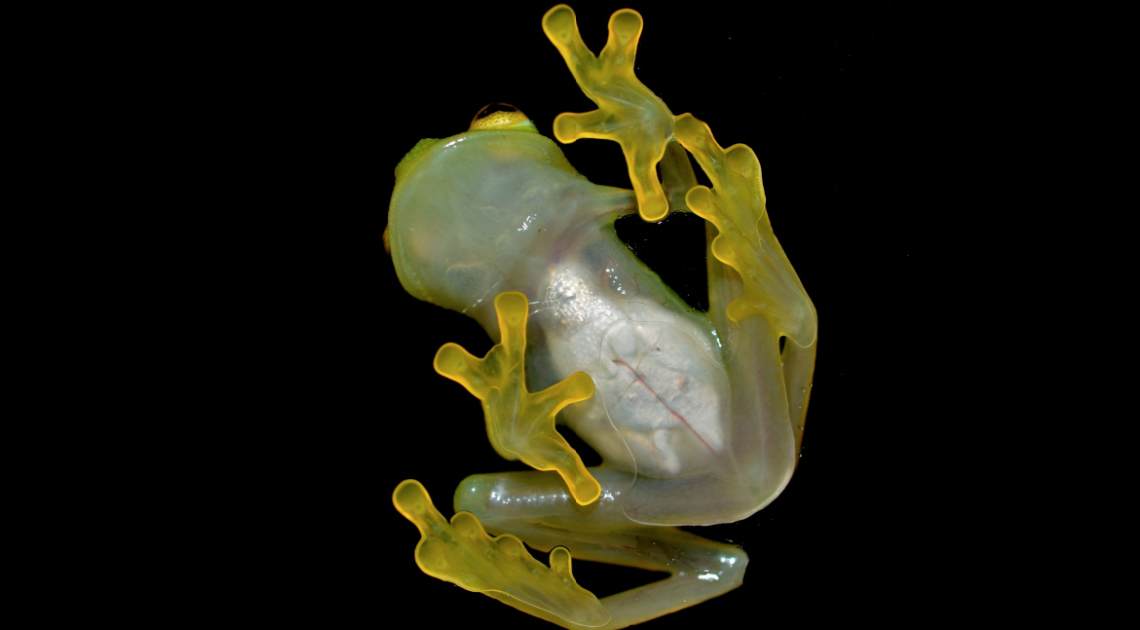 Creatures are at their most vulnerable during sleep cycles. As a result, some get around it altogether… at least for a while. For example, newborn dolphins don’t get any shuteye for the first month of their life, keeping at least one eye open for predators. Scientists have found their mothers don’t get any sleep during this period, either.

Some fruit flies survive on just four minutes of sleep per day, and alpine swifts have honed the ability to fly up to 200 days straight without landing, let alone sleeping. (The debate continues about whether they’ve somehow learned to sleep while flapping.) And bullfrogs are known for extended periods without sleep followed by episodes of brumation or “binge sleeping.”

But when it comes to glass frogs, they’ve found the best of both worlds by perfecting the art of camouflage while they nap. As a result, they can snooze the night away without fear of becoming a snack.

Sleeping is Vanishing for Glass Frogs

Instead of finding the perfect hidey-hole or refusing to sleep, glass frogs have developed a remarkable adaptation that ensures they always get enough beauty rest: They congregate on green leaves where their brightly colored backs naturally blend in.

But their reddish-hued underbellies could mean all bets are off. That’s where a nifty camo trick comes into play. A study in Science recently reported the incredible findings after researchers observed northern glass frogs (Hyalinobatrachium fleischmanni) while asleep, after exercising, and while under anesthesia. When glass frogs decide to hit the hay (or leaves), their bodies go into transparency mode.

What does this so-called transparency mode entail? Up to 89 percent of the red blood cells in their body go to the liver, hiding there. The process swells the liver to twice its normal size, rendering their translucent bodies otherwise invisible.

The Impossible Feat Scientists Have Yet to Explain

Scientists still don’t understand how this physiological feat is possible. After all, the blood must crowd so tightly into the liver, it should lead to clotting. Yet, it doesn’t.

When asleep, glass frogs HIDE THEIR RED BLOOD CELLS INSIDE THEIR LIVERS, which are covered in GUANINE-CRYSTAL DISCO MIRRORS that scatter light & make the frogs 2-3 TIMES MORE SEE-THROUGH.

Jesse Delia from New York’s Museum of Natural History explains, “They somehow pack most of the red blood cells in the liver, so they’re removed from the blood plasma. They’re still circulating plasma… but they do it somehow without triggering a massive clot.”

While there’s still a lot more to learn about how their bodies achieve this state without long-term adverse side effects, the findings provide a window into how one of the only transparent land animals in the world functions. Moreover, some scientists believe further study of how the frogs avoid red blood cell clotting could lead to anti-coagulation medication breakthroughs for humans.

According to Sönke Johnsen of North Carolina’s Duke University, “The clotting process for frogs is not so different from that of humans, so whatever we learn from the frogs could end up being relevant to human clotting.” While these advances may still be decades away, diving more into the glass frog’s superpower could pave the way for significant advances in treating heart attacks, strokes, and more.

Next post Snoopy First Appeared in a Ripley’s Believe It or Not! Cartoon

Previous post Ripley’s Answers the Most Googled Questions of 2022