The Tomb Of Tutankhamen And The “Curse Of The Pharaohs”

Elemental evil spirits or bad luck? Here’s what we know about the “Curse of Tut.” 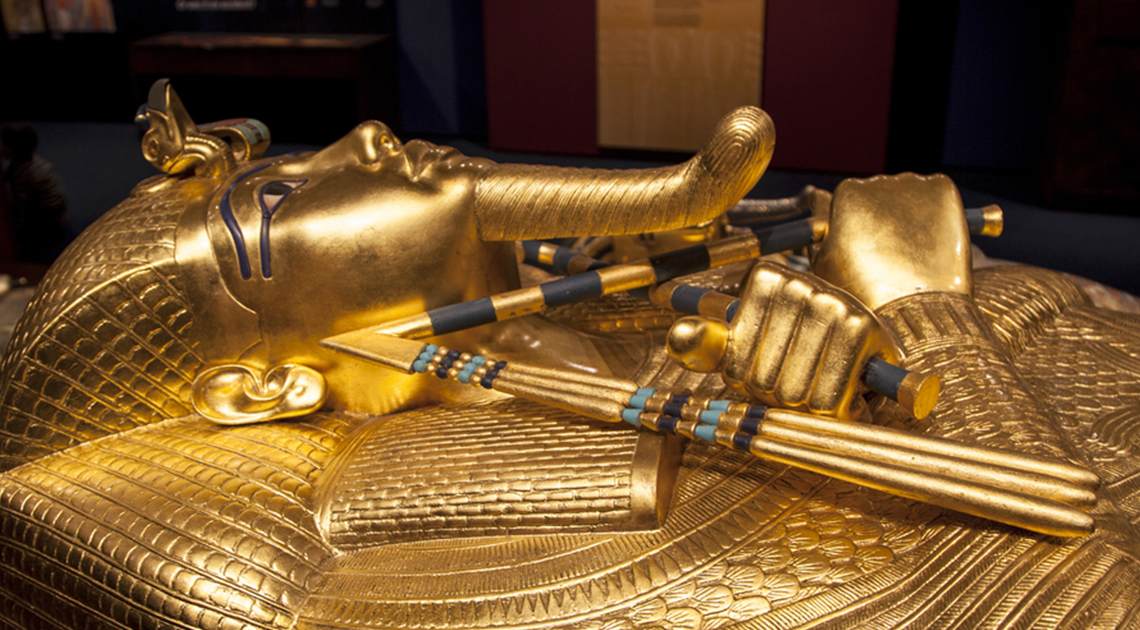 On November 22nd, 1922, Howard Carter and a team of archaeologists uncovered steps hidden in debris near the entrance of a tomb in Thebes, Egypt. The steps led to another tomb’s entrance inscribed with the name Tutankhamen, the famed boy king of Egypt. When Carter and his crew entered its interior chambers four days later, more than 3,000 years of repose came to a sudden halt.

Some believe a vicious curse of death and destruction got unleashed with the tomb’s unsealing. Did the young pharaoh’s final resting place really contain a vindictive spell meant to deter grave robbers? Here’s what we know about the most famous curse in Egyptology, and the lives it’s thought to have cut short.

The Curse of Egypt’s Kings

“Curse be those that disturb the rest of Pharaoh. They that shall break the seal of this tomb shall meet death by a disease which no doctor can diagnose.” (Inscription attributed to an Egyptian royal tomb)

The opening of King Tutankhamen’s tomb on November 26th caused a media sensation.

Unlike other burial chambers excavated in Egypt, Tutankhamen’s final resting place remained intact despite several apparent grave robberies. Carter and his British financier, Lord Carnarvon, reveled in the exploration of the treasure-filled rooms. The men, along with their crew, painstakingly documented the grave goods within each of the tomb’s chambers. 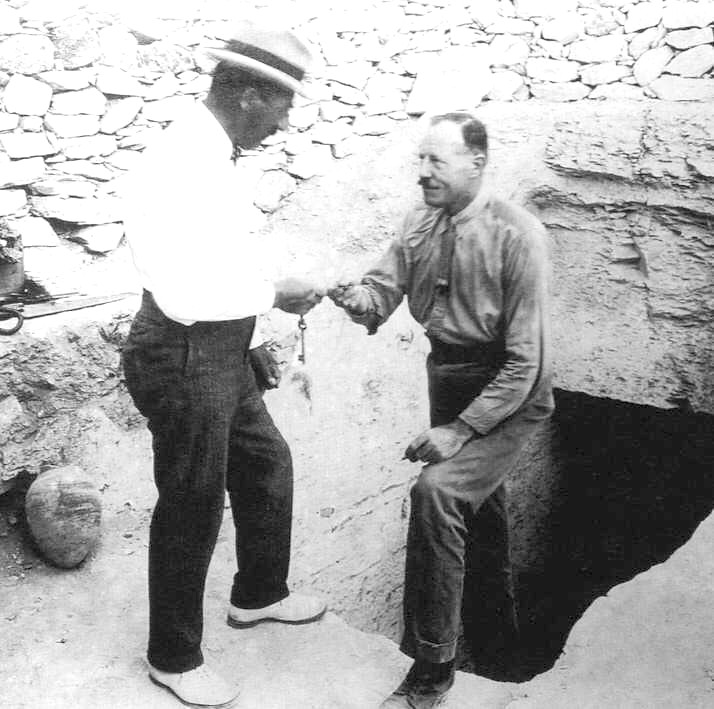 On February 16th, 1923, Carter opened the door to the last chamber. Inside, archaeologists found a sarcophagus with three coffins nested inside it. The innermost coffin was made of solid gold and contained Tut’s mummified body. The tomb also revealed priceless artifacts, from jewelry to statues, golden shrines to a chariot, weapons, and clothing. The most valuable object of all? The fully intact mummy itself.

The Western Fascination with Ancient Egypt

Although fascination with Egyptian culture first captured the Western European imagination in the 17th and 18th centuries, it gained serious traction in the 19th century. That’s when Jean-François Champollion first used the Rosetta Stone to decipher ancient hieroglyphics. Champollion’s contributions to Egyptology permitted the world a taste of the vast wealth of knowledge contained in ancient Egyptian texts. It also inspired the imaginations of authors.

By 1869, Louisa May Alcott’s short story “Lost in a Pyramid; or, The Mummy’s Curse” (1869) made the first mention of a full-fledged curse. By the late 19th-century, Sir Arthur Conan Doyle, author of the Sherlock Holmes mysteries, established Egypt as a source of maleficence with stories like “Lot No. 249” and “The Ring of Thoth.”

As Dipsikha Thakur notes, “[Doyle] was one of the Victorian occultist voices that gave rise to the curse of the mummy—today a well-known Orientalizing trope in film and fiction.” Now, you’d be hard-pressed to find a popular work of fiction or film dealing with mummies that doesn’t rely on the curse plot device to some degree.

Of course, Carter’s team remained undeterred by such fictional representations, working meticulously to catalog and describe the trove they uncovered. These treasures would end up a part of the iconic traveling exhibition called the “Treasures of Tutankhamen.” Today, the exhibition is permanently housed at the Egyptian Museum in Cairo.

Nevertheless, the discovery of Tut’s tomb created a worldwide press sensation fueled by sinister hints of an ancient curse. The New York World and the Times London published a warning from best-selling novelist, Marie Corelli, “The most dire punishment follows any rash intruder into a sealed tomb.” Some claim Carter even promoted the curse to keep looters away from the site. When people associated with the discovery started dying violently, however, the media coverage became frenzied. 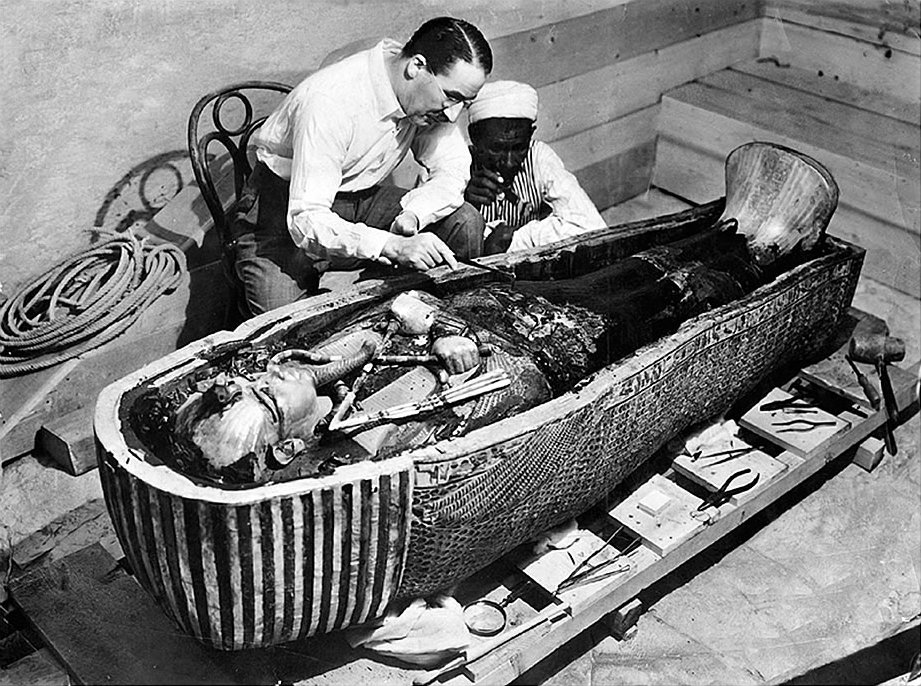 Photo from The Times – The New York Times photo archive, via their online store

The first strange event occurred on the day of the tomb’s opening. Carter returned home to find his canary’s head in the mouth of a cobra. A potent symbol of the Egyptian monarchy, the cobra metaphor was not lost on Carter. Several months later, Lord Carnarvon died at the age of 56 in Cairo from an infection related to a mosquito bite. Following his death, a citywide blackout overtook Cairo. Wild journalistic speculation followed, and papers flew off newsstands.

British journalist, Arthur Weigall, claimed to have predicted Carnarvon’s death months prior, saying Carter’s benefactor had laughed and acted disrespectfully at the tomb. Weigall recalled that he’d given the Lord “six weeks to live.” Sir Arthur Conan Doyle got in on the action, too. He speculated to American journalists that “an evil elemental” spirit conjured by ancient Egyptian priests had killed Lord Carnarvon.

The sensational journalism surrounding Tutankhamen’s tomb and the “curse of the pharaohs” contributed to a widespread belief that all Egyptian tombs contained curses. Today, we know this is far from true, though. While they do exist, examples of ancient Egyptian tomb curses prove rare. The few that survive are almost legalistic in structure. They proscribe specific punishments for various transgressions. Like most Egyptian tombs, Tut’s contained no mention of curses.

Despite the lack of a written curse, death appeared to stalk Carter and his former team members. Or, at least that’s what journalists wanted the public to believe. A little imagination and a lot of sensational journalism soon convinced the world that the “curse of the pharaohs was real.” Evil supernatural powers appeared to be at work from beyond the grave.

Victims included Prince Ali Kamel Fahmy Bey of Egypt, shot dead by his wife in 1923. Members of the original excavation team soon followed. In 1924, Sir Lee Stack was murdered. In 1928, Arthur Mace died of arsenic poisoning. Richard Bethell suffocated to death in 1929, and his father committed suicide in 1930. When Howard Carter died of Hodgkin’s Disease in 1939, the story sparked to life once more.

While some asserted that the string of deaths associated with Tutankhamen’s tomb proved the “curse of the pharaohs” was real, others attributed it to bad luck. Investigator James Randi decided to dig deeper. After exploring the “casualties” associated with Tut’s tomb, he came to some fascinating conclusions.

The average life expectancy after exposure to the “curse” was 23 years. Some people associated with the excavation lived much longer. Carnarvon’s daughter, who was involved in the discovery, died in 1980. Richard Adamson, who guarded the tomb for seven consecutive years, lived until 1982. Randi’s research showed that members of the “cursed” Tut group died at an average age of 73 years old, slightly longer than the life expectancy for individuals of their social class and time period. If anything, Tut’s curse proved beneficial.

Other events related to the curse, such as the canary killed by the cobra, have also been debunked. Many now believe an Egyptian released the snake in Carter’s home to deter him from exploring the tomb. As for Carnarvon’s death? Some scientists suggest he succumbed to molds and pathogenic bacteria buried along with Tut. It remains more likely, however, that he died from the infected mosquito bite. One thing’s for sure, though. The curse helped sell plenty of newspapers!