Things weren't always sunshine and Super Bowl rings for Brady, whose early career took a beeline for the bench. 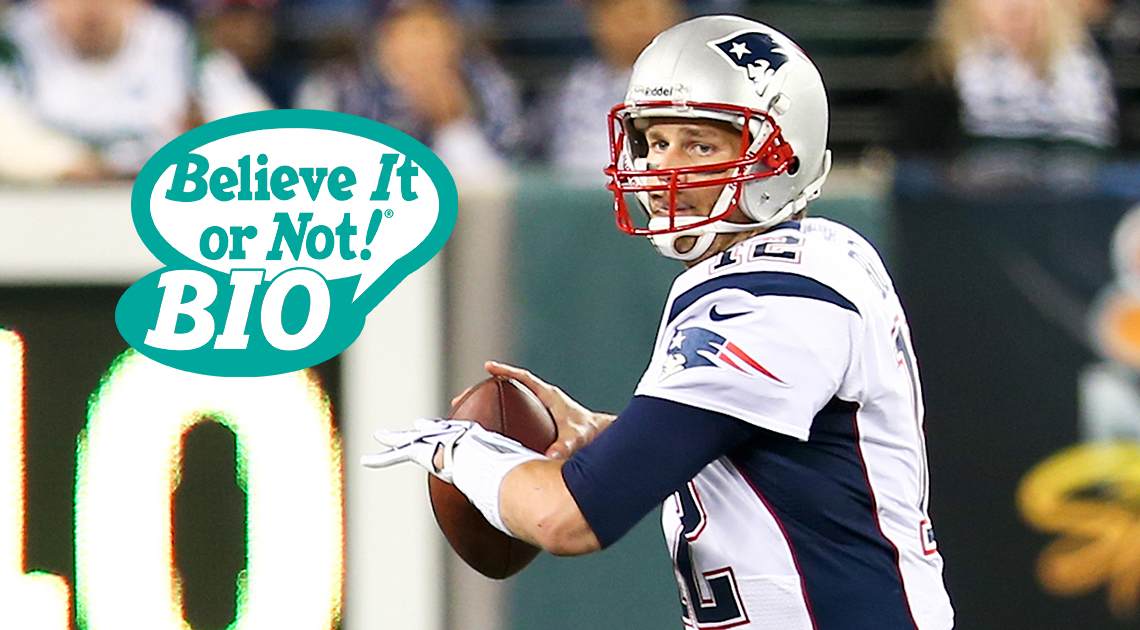 Since the dawn of the millennium, Tom Brady has been the defining image of American football, shattering records left and right and bringing home a record-breaking six Super Bowl rings with the New England Patriots. Throughout his career, Brady has garnered cult-like worship from admirers, absolute disdain from rivals, and, now, a glimmer of hope from fans of the Tampa Bay Buccaneers. There may not be a gray area when it comes to how you feel about Tom Brady, but if there’s one thing everyone can agree on, it’s that the man is a winner.

As Brady prepares to “Fire the Cannons” in his 10th Super Bowl, we’re sharing some truly unbelievable facts about the NFL’s biggest star.

Tom Brady is the first-ever NFL quarterback to have been granted roster-control.

It’s been less than a year since Brady traded in his patriotic digs for the pirate life, having ended his 20th season with the Patriots as a free agent. As he shipped off to warmer waters, he only had one request: he calls the shots. Brady is the first-ever NFL quarterback to have been granted roster-control.

The move paid off for the Bucs, who are sailing their way into their second-ever Super Bowl, 18 years after their first and last. Brady didn’t just get the team to the big game, though—he steered them directly into history as they become the first NFL team ever to play the Super Bowl game at their home stadium.

Brady started his football career as the third-string quarterback of a losing team.

Brady started his high school career as the third-sting quarterback of a losing freshman team, spending more time practicing defense than leading the pack, running linebacker drills for a chance to play. During his sophomore year, he finally got a chance to play QB and proved—not for the last time—that all he needed was a chance, leading the game-winning drive in his first game. By the time he graduated, Brady was named one of the “Bay Area’s hottest young players,” with an 11-9 record.

Throwback! Before starring in the NFL, Tom Brady grew up in San Mateo and played high school football at Serra. https://t.co/OckC3baRBk pic.twitter.com/aAlXpyBNIR

His slow crawl to success continued at the University of Michigan, where he returned to the sidelines as the seventh-string quarterback. After two years of riding the bench, while watching future NFL quarterback Brian Griese thrive, Brady got his chance in the spotlight during his junior year. While he had a successful final two years at Michigan, he made sure he had a backup plan in case the NFL didn’t pan out, boosting his résumé with a summer job at Merrill Lynch.

Of his time on the sidelines, Brady has said, “I struggled in college. I struggled at the early part of my career, like I was never the first guy chosen. So I think that part is just in me, it’s deep, and it’s there. It’s not going anywhere.”

Like many other professional athletes, including Patrick Mahomes, Brady played more than one sport in high school: football and baseball. Exceptional at both, he was drafted to the Montreal Expos during the 1995 Major League Baseball draft, ultimately deciding to continue pursuing his football dreams at Michigan instead.

Tom Brady was a sixth-round draft pick, after 198 other players.

During the 2000 NFL draft, 23-year-old Brady watched as six rounds passed and 198 other players were picked until he was finally called up by the New England Patriots. A year into his tenure on the team, Brady finally met owner Robert Kraft, who called him out on being the sixth-round pick. Brady responded by prophesizing, “I’m the best decision this organization has ever made. You’ll never regret picking me.”

History repeated itself in his early Patriot days, with Brady riding the benches as the fourth-string quarterback. Behind starter Drew Bledsoe and backups, John Friesz and Michael Bishop, Brady worked his way to that backup-QB title. In 2001, Bledsoe suffered an injury and was out for the remainder of the season. He granted Brady his time to shine, kickstarting his career and earning his very first Super Bowl victory the following February.

The debut of the TB Times showed the world that Tom had a weird side.

As a soldier of “the Patriot Way,” Brady rarely showcased his personality, sticking to the professional role of a team leader. But fans and followers alike saw a different side of Brady in 2016 when he debuted the TB Times on his Instagram and Facebook pages. What started as a meme of a camel wearing a Patriots helmet on “hump day” quickly turned into “front-page news,” featuring cartoons, jokes, and puns about the teams the Patriots had defeated the day before.

As time went on, the toons got weirder. A crocodile, aptly named Croc, started making his way into the illustrations with zero context. Years later, the cartoon’s brainchild would be revealed as Brady’s 20-something social media manager, Jeff Fine, who, along with illustrator Dean Krupka, worked closely with Brady to keep the content cohesive and humorous.

Brady was particularly involved in making sure he was not the spotlight of the cartoons, once scrapping an illustration suggesting he was ’90s cartoon hero Captain Planet, with his teammates drawn as the Planeteers gathering to summon him. Krupka quickly worked up a new drawing where they were instead depicted with a Rock and Roll Hall of Fame theme, as they had defeated the Cleveland Browns that week.

Sadly, the TB Times came to an end after a final celebration of the Patriots’ 2018 AFC Championship victory, only reappearing once more after the 2019 Super Bowl.

Brady’s earned his fair share of nicknames over the years, but his 2019 trademark attempt of Tom Terrific proved that even the G.O.A.T. can’t always get what he wants.

After receiving his application, the U.S. Patent and Trademark Office replied with a hard no on the request, as the name was “pointed uniquely and unmistakably” to another famous Tom, Tom Seaver of the 1969 “Miracle Mets.”

Having received backlash from Seaver’s fans, Brady was quick to excuse his faux pas by explaining that he actually didn’t like the nickname and was merely attempting to prevent it from being used about him.

The only son of Galynn and Tom Brady Sr., Brady and his three sisters, Maureen, Nancy, and Julie, were extremely close and incredibly competitive.

“My fault,” said Brady Sr., “I started it. Everything we did, and I mean everything, like running home from church, throwing a rock the farthest… Everything was a competition.”

Their competitive nature worked out, with all four Brady siblings receiving athletic scholarships for their achievements. His sister Maureen was even inducted into the San Mateo County Hall of Fame, four years before Tom, for her 111-10 career as a high school softball pitcher.

Four kids playing sports at the same time may seem like a lot to keep up with, but, Believe It or Not!, their parents never missed a game. According to Brady Sr., they once attended 315 of their children’s games in a single year!

Again with the prophecies, Brady, tired of being in his sisters’ shadows, once told his mom, “One day, I’m going to be a household name.”

Signing with the Bucs made Brady the second-highest paid player in NFL history.

With all that success comes plenty of bills in the bank, but one record Brady has yet to break is that of the highest-paid player in history. Having a true understanding of “team,” Brady spent most of his two decades with the Patriots, turning down larger salaries to free up money for incoming quality teammates.

Until he signed with the Bucs, Brady was ranked fourth in the category. But, by signing the 2-year $50 million contract, he surpassed both of the Manning brothers, and now sits in second place at $261.8 million, just behind Drew Brees’ cool $294 million. (Though, Kansas City Chiefs QB, Patrick Mahomes, is certainly coming up quickly behind them all.)

This hefty amount also doesn’t account for his income from endorsement deals with companies like Intel, Under Armour, and UGG. Actually, it’s a low salary compared to his wife Gisele Bundchen’s $1 billion career earnings as a model.

Brady proves time and time again that age is nothing but a number.

Brady set an age-related record during his first game with the Bucs when he became the oldest NFL player to score a touchdown at the ripe old age of 43 years, one month and 10 days.

As he officially announces his retirement from the game of football, it’s safe to say that Tom Brady’s career has been one for the books.

Previous post From Pigskin Past To Record-Setting Cheers: Boning Up For Super Bowl LV