Houdini shared his sinking ship escape secrets in seminars for American soldiers during World War I! 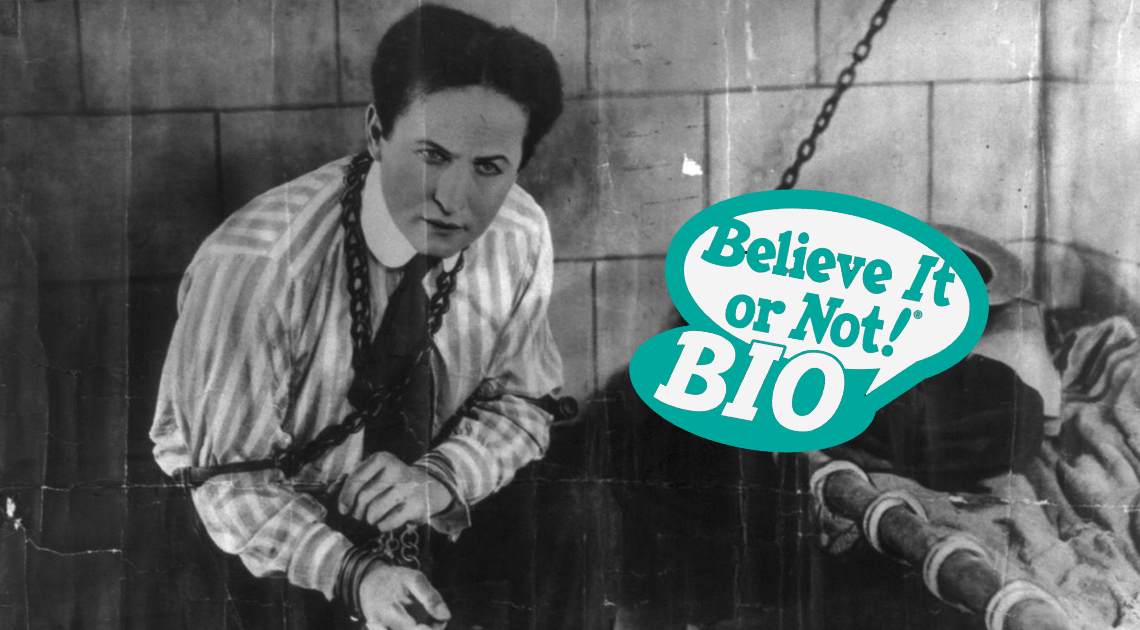 Harry Houdini is considered one of the world’s foremost illusionists and magicians. Born in Budapest, Hungary in 1874, he started to perfect his craft from an early age, going on to perform feats so unbelievable that some have still gone unexplained to this day.

Fans are familiar with his miraculous escapes and illusions, many of which he invented and devised himself. From being buried alive to escaping from straitjackets and other increasingly elaborate stunts, there was seemingly nothing this master of magic couldn’t do.

Even more astonishingly, this is just scratching the surface of his story. From his feats in the field of aviation to his work in the field of spiritualism, here are some of the most fascinating and unbelievable facts about Harry Houdini’s extraordinary life.

Harry Houdini was first known as “The King Of Handcuffs.”

Born Erik Weisz, Harry Houdini went by a different stage name in the early stages of his remarkable career. At the close of the 19th century, he was struggling to support himself as a performer and almost decided to open a school of magic instead. It was then that he was sent on a European and United States tour by Martin Beck, a big industry name. While in Europe, he practiced refining his skills as an escape artist. Word spread, crowds grew, and he came to be known as “The King of Handcuffs!” 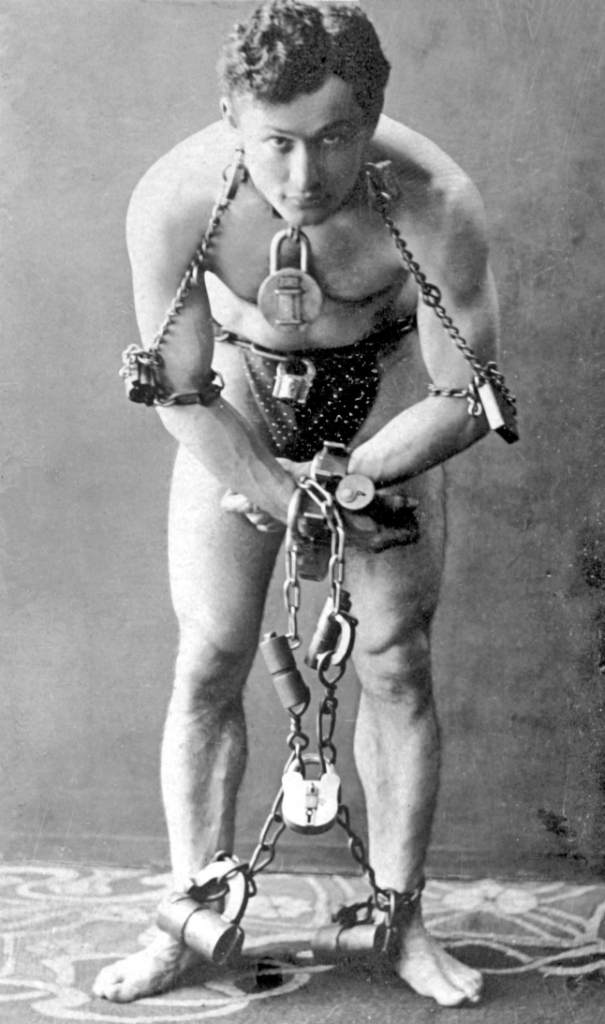 Many today consider Houdini to be the very last word in magic and illusions. However, there was actually another accomplished and respected magician in Houdini’s very own family

Ferenc Dezső Weisz, Houdini’s younger brother, had performed with his superstar sibling earlier in his career. As the “King of Handcuffs” gained fame, he and his brother, then known as Hardeen, continued to work on illusions, maintaining the belief that the pair were vicious rivals to keep the interest in both of their acts. As Hardeen once stated, “We made no secret of the fact that we were brothers… but we did keep secret not only the fact that we were good friends but that Harry had set me up in business!”

Houdini bequeathed his magical paraphernalia to his brother on his death, which Hardeen continued to use.

Houdini almost became the first man to perform a controlled flight over Australia.

Another of the great passions of Houdini’s life was aviation, and as fame and fortune came his way, he was sure not to forget it. He purchased an airplane in 1909—his first. Being ambitious and determined as ever, he wanted to become the first person to perform a controlled flight over Australia. And, the very next year, he succeeded!

Unfortunately for him, though, it seems he was the second person to achieve this. Captain Colin Defries is believed to have done so just before Houdini, in December 1909. 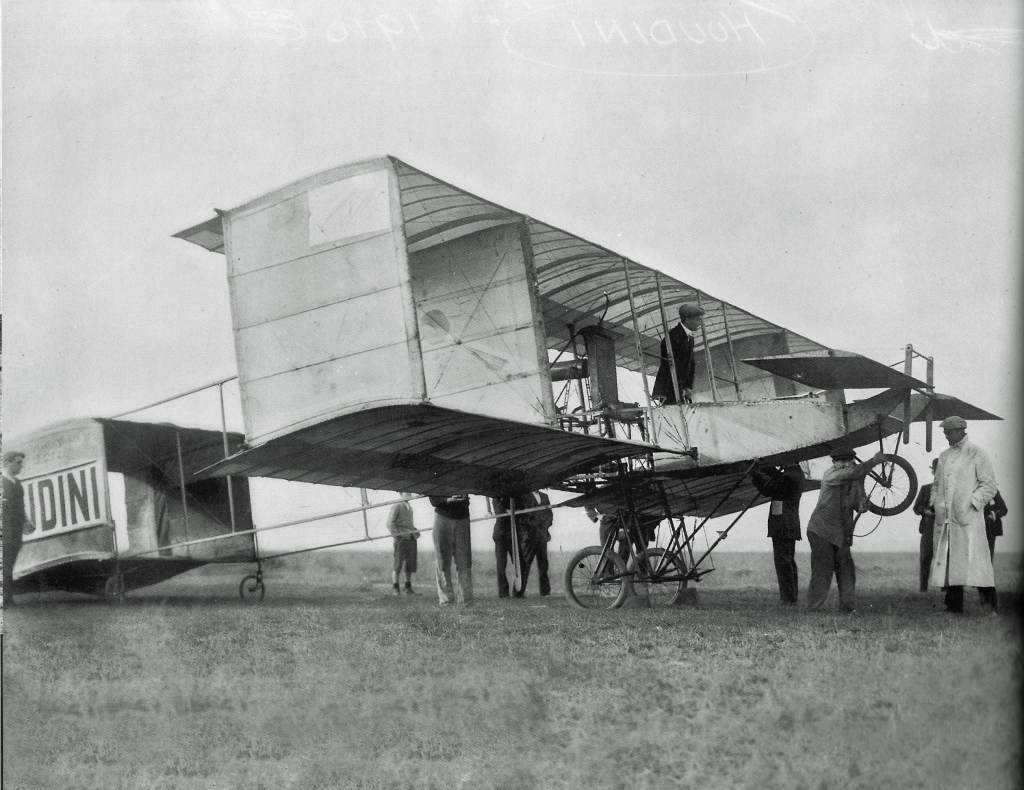 Being a titan in his field, Houdini made several very famous acquaintances over the course of his colorful life. One notable person he associated with was Sir Arthur Conan Doyle, the famed creator of fictional sleuth Sherlock Holmes.

Houdini developed a keen fascination with spiritualism after the death of his beloved mother, Cecília Steiner, in 1913. Sir Arthur Conan Doyle shared this interest, having tragically lost his son in the First World War.

Houdini soon grew doubtful of the practice and his literary friend’s commitment to it, which caused the pair to split apart. However, the concept of communicating with the dead remained with Houdini for the rest of his life…and beyond!

Houdini and his wife made a pact to try to contact each other after their respective deaths.

Houdini was a great illusionist, but he had no patience for tricksters. In magic and in spiritualism, he was very skeptical, never hesitating to debunk or deride the work of those he considered fraudulent. In fact, this was one main reason for the rift that formed between Sir. Arthur Conan Doyle and Houdini. The former was a staunch believer in the abilities of Mina “Margery” Crandon, one of the best-known mediums of the day, while Houdini made his doubts about her very clear.

Nevertheless, it seemed that the famed magician still held out some hope for making contact with the dead. He and his wife, Bess Houdini, made a promise to each other that they would try to contact each other from beyond the grave following their deaths. Bess, who lived for another 17 years after Houdini’s death in 1926, would later assert that nothing came of this. Nevertheless, Scranton, Pennsylvania’s Houdini Museum continues to hold an annual séance hoping to hear from him (and others). 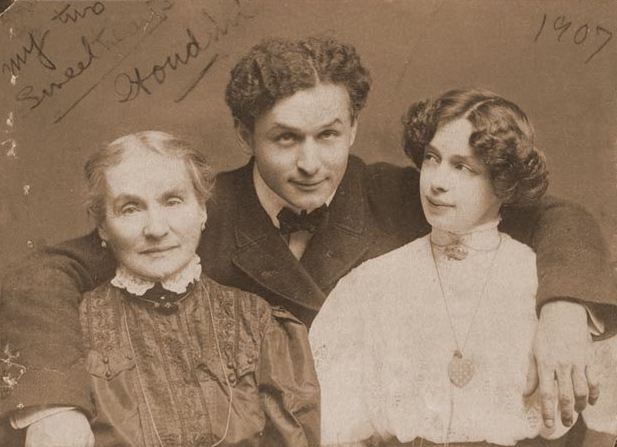 Houdini is said to have given Buster Keaton his nickname.

Another famous name with whom Houdini associated was Buster Keaton, a legendary actor and comic performer who made his name with hilarious stunts in silent films.

Both men went on to become huge stars, but they share quite a humble link. Houdini owned the Mohawk Indian Medicine Company, a touring show, with Keaton’s father. Where did Joseph Frank Keaton get the iconic nickname Buster? According to a possibly tall tale, Houdini gave it to him!

The story goes that Joseph Frank Keaton had a bad fall at only six months old, though was luckily unhurt. In response to the accident, Houdini remarked, “That was a real buster!” This old-fashioned word, Keaton later stated, meant an accident that really could’ve been serious. As with all good nicknames, it stuck.

Houdini hid lockpicks in his hair to help him perform his illusions.

As an escape artist, lockpicks and such were the tools of Houdini’s trade. Though he was frequently searched for anything he may have on his person prior to an act, often insisting on this himself as a point of pride, he had ways of secreting little tools away.

In Ruth Brandon’s The Life and Many Deaths of Harry Houdini, the author discusses some of Houdini’s shows in which he was strip-searched and his sets and props examined prior to performing. Brandon writes, “Houdini’s skill as a magician, which meant he could palm, misdirect attention, and hide his [lockpicks] in unlikely places, came in useful here. A favoured hiding place was his thick, wiry hair. When he had to strip naked, he sometimes hid a small pick in the thick skin on the sole of a foot—not a spot that would ordinarily be searched.”

Houdini named himself after another great magician.

As was supposedly the case with Buster Keaton, the greatest stage names always tend to come from somewhere. In Erik Weisz’s case, the inspiration for the name ‘Harry Houdini’ was clear.

As he worked at his career and practiced his art, he was naturally inspired by one of the giants in his field: Jean-Eugène Robert-Houdin. This French magician and performer established and popularized many of the traditions and styles that the young Weisz studied so hard growing up. And, they had a tremendous effect on his career.

Robert-Houdin’s own stage name, Houdini, became Weisz’s. While the French icon was a true role model for Harry Houdini, his once-idol wasn’t immune to his criticism. Houdini later wrote a scathing book about him, titled The Unmasking of Robert-Houdin!

Houdini began performing at the age of 9.

How old was the youthful escape artist when he started to perform for others? Just nine years old! Around this time, he would show his proficiency as a developing magician with an extraordinary feat: collecting pins from a surface using just his eyelashes! For such a performance, he was paid a princely 35 cents.

He certainly knew how to put on a show right from the start. As a trapeze artist, he was known as “Ehrich, The Prince of the Air.” And, in another memorable performance, the young entertainer made his escape from the corpse of a whale!

Houdini’s ball and chain performance in San Francisco helped save his career.

The 24-year-old Houdini had been struggling to launch his career for years. But, during one fateful visit to San Francisco, his floundering talents were saved when a hospital clerk took a chance on him. Indulging the clerk’s peculiar request to be laced into a straitjacket, Houdini’s legendary escape trick was born.

In August 1907, Houdini performed his now-famous act at a San Francisco theater. While there, he also put on one of the most daring shows of his life: leaping into the perilous waters of San Francisco Bay, home to the now-defunct Alcatraz prison, shackled to a ball and chain. An imitator later tried the same stunt and was saved by passers-by, but Houdini emerged unharmed as always.

As secretive as he was with the ins and outs of his spectacular illusions, he saw fit to share some of his talents for the good of his beloved country. His own assistants knew only of the crucial details of his feats, but during World War I, Houdini shared his secrets in seminars for American soldiers. What did he teach them? How to escape sinking ships, and how to free themselves from all sorts of bindings!

When the United States joined the conflict in 1917, he even put his successful career on hold for a time to dedicate himself to this effort. 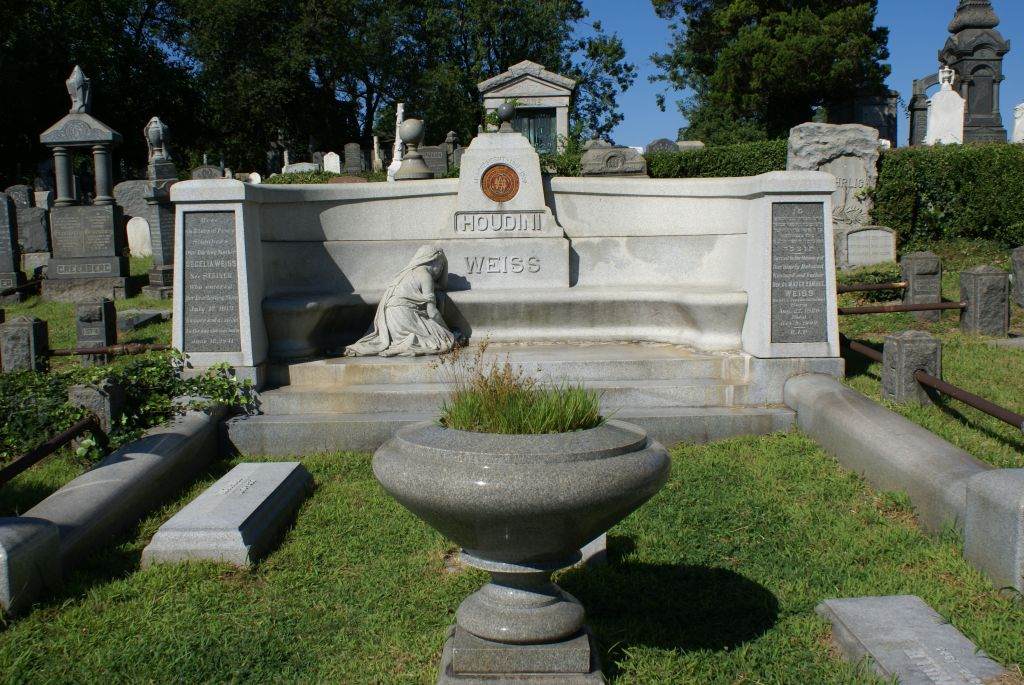 The gravesite of Harry Houdini in the Machpelah Cemetery in Glendale, Queens, New York || CC: Anthony22 via Wikimedia Commons

One ‘fact’ many people know about Harry Houdini is that he was killed by a punch to the stomach. This didn’t happen in a brawl, but was the result of Houdini’s insistence, claiming that he wouldn’t be harmed. The spectacle of this trick was that he could brace his abs against the impact, but he was caught unprepared by this blow and died of his injuries.

While he did indeed die of a ruptured appendix (peritonitis) just days after this event, on the last day of October 1926, there’s a bit more at work here. Prior to this hit, Houdini had been suffering for some time, but continued to perform, with appendicitis.

Whether the inadvertent attack worsened his symptoms or not remains unknown, but there was a medical basis for his sad demise at the age of just 52. How like Houdini and the exact cause and circumstances of his tragic death remain a bit of a mystery!

Next post Kayakers Survive A Whale Of A Tale