Was The Bible’s Forbidden Fruit Really An Apple?

This humble fruit is not to blame for humanity’s expulsion from paradise. 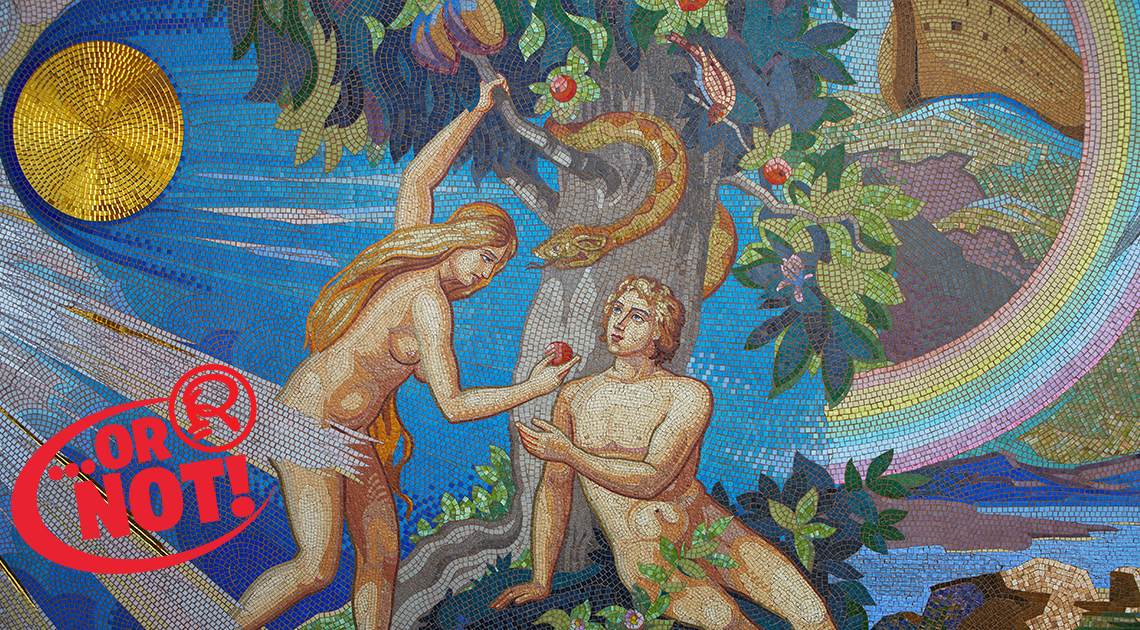 In 2017, people celebrated the 350th anniversary of John Milton’s Paradise Lost, one of the most influential works of English literature. The 10,000-line poem dramatizes the oldest story in the Bible and featuring: God, Adam, Eve, and Satan—who takes the form of a silver-tongued serpent.

Central to the story, too, is the “forbidden fruit.” Harvested from the Tree of the Knowledge of Good and Evil, God expressly forbids Adam and Eve from eating it. So, of course, they devour it. Their taboo snack results in a curse plaguing humanity with toil, disease, and death. What’s more, Adam and Eve get banished from the Garden of Eden.

In his poem, Milton refers to the “forbidden fruit” twice as an apple. And he’s just one of a long line of writers and artists who have blamed humanity’s expulsion from paradise on this humble fruit. But, was the forbidden fruit in the book of Genesis an apple? Not likely. Here’s why.

The Western Tradition’s Obsession with the Apple

The Western tradition is littered with representations of the apple. You’d be hard-pressed to find another fruit that pops up as frequently in everyday speech, art, and literature. It also represents a common symbol found in ancient mythology. In Scandinavia, legends told of the Golden Apples grown in Asgard and harvested by the goddess Idunn. One bite bestowed Scandinavian gods, like Thor, with immortality.

In Greek mythology, the Golden Apple led to a fight between three goddesses—Hera, Athena, and Aphrodite. This conflict laid the foundations for the Trojan War before Paris ever laid eyes on Helen of Troy. Nearby, in the Middle East, The Arabian Nights spoke of the magic apple of Samarkand, capable of curing all human disease. 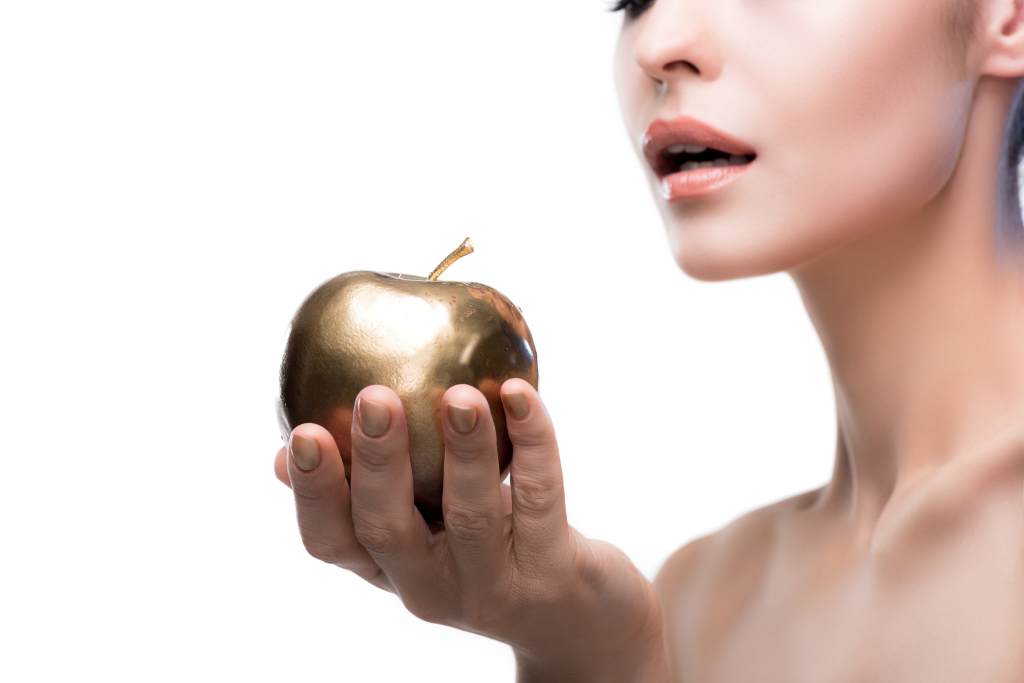 Besides mythology, the enigmatic apple has been painted by countless masters including Caravaggio, Dürer, Titian, and Magritte as a symbol of the Fall. And authors have long waxed poetic about the “forbidden fruit,” from Dante to Robert Frost, Emily Dickinson to Christina Rossetti.

Curiously, though, an apple is missing from Michelangelo’s 16th-century masterpiece, Temptation and Fall, painted on the Sistine Chapel ceiling. In its place, Eve clings to a “forbidden fig.” Is this a clue to the real identity of the forbidden fruit? The answer lies in a closer examination of history.

How Apples Became Associated with the Forbidden Fruit

The Book of Genesis in the Old Testament reveals an interesting omission. The forbidden fruit that the serpent pawns off on Eve is never specifically named. Instead, the generic Hebrew term peri is used.

Since peri can refer to any fruit, a debate has raged for centuries over what Eve ate. From grapes to pomegranates, apricots to figs, olives, and even grapefruit, Rabbinic commentators came up with plenty of contenders besides apples.

So, how did the apple, a simple fruit beloved by the Western tradition, transform into a symbol of evil and exile? You can blame that on a Latin pun that made its way into Jerome’s fourth century A.D. translation of the Bible. 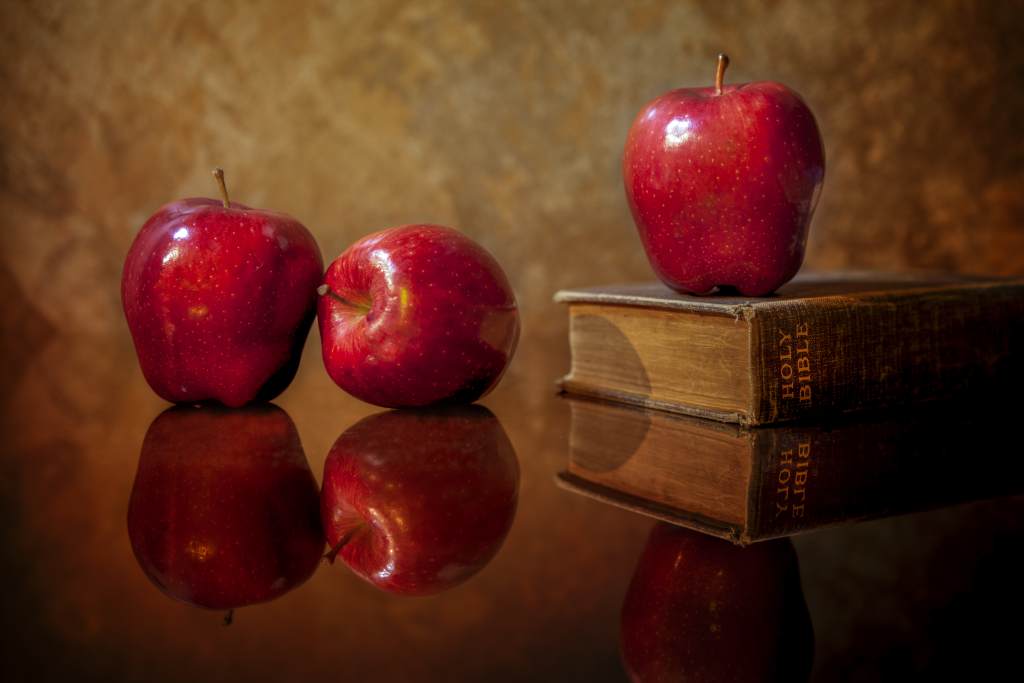 When Jerome translated the Old Testament into Latin, he opted for a clever, though confusing, wordplay using the term malus. Malushas two distinct translations:

As early Christians wrestled with which fruit first tempted Adam and Eve, the apple made sense. Not only did the Latin pun lead to a common misunderstanding about the fruit identified in Genesis, but the apple’s prominent, supernatural role in pagan mythology (e.g. Golden Apples of Iddun, etc.) may have also worked against it. The malus theory even explains why Michelangelo opted for the fig in his Sistine Chapel fresco.

The Fall of the Apple

But what truly sealed the apple’s fate as the “forbidden fruit?” A popular 16th-century engraving by German artist Albrecht Dürer.

Completed in 1504, it became the template for masterpieces by painters such as Lucas Cranach the Elder. Cranach’s depiction of Adam and Eve includes a smattering of apples hanging from the tree above the couple, vibrant and misunderstood temptations.

By the time Milton rolled around with his epic poem in the 17th century, the vilification of the apple was complete. Countless works of art depicted it as the culpable fruit. In Paradise Lost, Milton simply finished the job. By speaking of Adam and Eve’s disastrous snack as the Apple—with a capital “A”—he cemented the food’s reputation as the “forbidden fruit.”

Ultimately, the apple’s fate as the forbidden fruit may also have something to do with its elegant appearance. It makes for a far more tantalizing object of delight in paintings than other options, such as grapefruit.