Who Really Invented The Bagpipes?

If you answered the Scottish, think again. 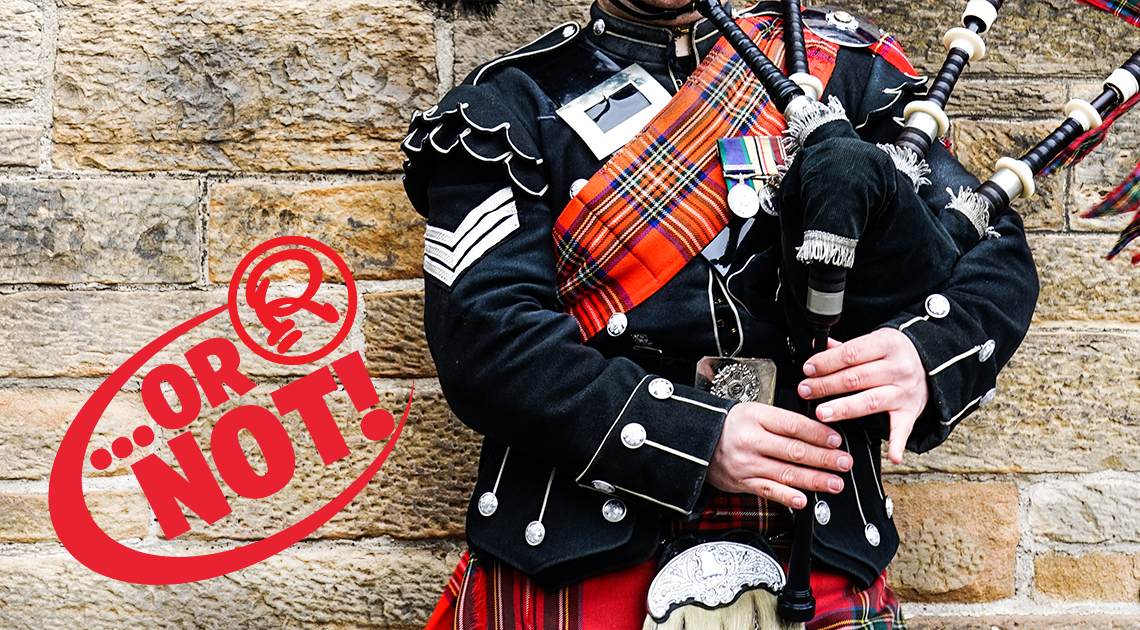 Each year, the Royal Edinburgh Military Tattoo puts on a spectacular performance of bagpipers and drummers in Scotland. The event draws crowds of 220,000. More than 100 million spectators tune in via television. Of course, the showstopper of the annual tattoo remains the pìob-mhór or Highland bagpipes.

No modern-day nation is as closely associated with the drone of pipes as Caledonia. (That’s the Latin name given by the Romans to Scotland.) Yet, the origins of the instrument stretch back many thousands of years and miles. Here’s what we know.

Tracing the history of the bagpipe is no easy task. Like Hansel and Gretel’s breadcrumbs, clues about the instrument’s origins are scattered across time and geography. Nonetheless, history sleuths have compiled a lengthy lineage for the instrument.

The evolutionary chain originated in Sumeria during the third millennium BC. From Sumeria, the double pipes traveled to Egypt, Phrygia, Lydia, and Phoenicia. Then, they came to Greece and Rome. Eventually, they made their way to the northernmost frontiers of the Roman Empire. A military staple, they were often sounded along the walls dividing Roman-occupied Britain from unconquered Caledonia.

Disfigured Faces and the “Reproach of Athena”

Ancient references to bagpipes exist in literature. They start with accounts from Greek writers such as Aristophanes, Thucydides, and Aristotle. Medieval mistranslation of the Greek word “aulos” (and the Latin word “tibia”) as “flute” led to centuries of confusion, though. As it turns out, “aulos” and “tibia” were double-pipe reed instruments. The musical “great-grandparents” of today’s bagpipes.

There was one massive problem with the aulos, though. It caused the “reproach of Athena,” or facial disfiguration. The deformation resulted from continually puffing out the cheeks while playing. The resulting look was anything but pretty, according to ancient writers. What’s more, the instrument was tough to master. Students often broke their pipes out of frustration or fear of flappy cheeks. Fortunately, the bagpipe’s iconic “airbag” was added by the Romans, giving ancient faces a break.

Greeks stayed away from bags, though. Instead, they invented phorbeia to protect their cheeks. Phorbeia were leather bands, which passed around the cheeks and across the mouth. A hole in the leather allowed the wearer fill the pipes with air. The contraption supported the cheeks, preventing disfigurement. It also looked like a dog muzzle. Nevertheless, it let Greeks keep playing without compromising their good looks. 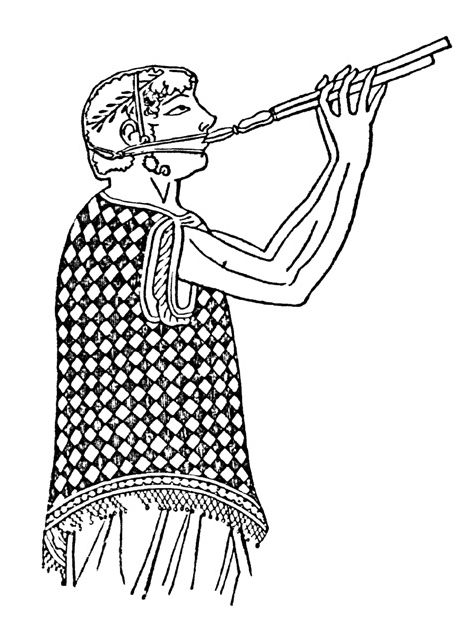 Auletes wearing a leather strap called a phorbeiá (φορβεία) in Greek or capistrum in Latin, to avoid excessive strain on the lips and cheeks due to continuous blowing.

Who was the first army to march to pipes and drums? If you guessed the kilted Celts, you’re wrong. It was the Spartans. According to Aristotle, “It was their custom of entering battle to the music of pipe players which was adopted in order to make the fearlessness and ardour of the soldiers more evident.”

The music also had practical applications. It allowed thousands of Spartans to march in sync. Thucydides noted, “They advance slowly to the music of many pipe players which were stationed at regular intervals throughout the ranks, marching together rhythmically, that their ranks might not be broken.” Take that, Xerxes!

Nero Was a Piping Fool

Romans “borrowed” the aulos from the Greeks, along with their gods, mythology, togas, columns, etc. Then, they formed a piper’s guild. Soon pipes were featured at public games, funerals, religious ceremonies, and theater performances. Some say Caesar decided to cross the Rubicon only after seeing and hearing a lone piper on the other side.

Ovid talks about pipers dressed in elaborate costumes, and the Roman Emperor Nero may have been piping (instead of fiddling) when Rome burned. According to the Roman historian Dio Chrysostom, “They say [Nero] can…play the aulos both with his mouth and also with his armpit, a big bag being thrown under it, in order that he might escape the disfigurement of Athens.”

So how did the bagpipes finally get to Scotland? Double reed pipes were already a familiar sight in ancient Britain by 43 AD when the Romans invaded. The Latin army introduced the bag. By the time the Romans left, the instrument flourished in Britain and Gaul (modern-day France). There’s even a fascinating oral tradition passed down among Italian bagpipers to this day. Frank J. Timoney learned the legend while in Italy.

According to tradition, when Caesar invaded Britain, he hid his bagpipers from the mounted Celtic forces who opposed him. When the cavalry moved in, Caesar ordered the pipes to sound. The unexpected nasally drone spooked the Celts’ horses, causing them to lose to the Romans. Understanding the reason for their defeat, the Britons came to worship the instrument for its magical qualities.

Whether there’s any truth to the myth, we’ll likely never know. It’s ironic to think Caesar may have defeated the Britons with bagpipes, though. No matter the case, they remain a staple of Celtic culture in Scotland and Ireland to this day.

Next post The Strangest Conspiracy Theories The Interwebs Has To Offer