The Ouija Board: Summoner Of Spirits Or Vintage Dating Game?

A man with over 300 Ouija boards and zero desire to use one.

While some collectors stick to hunting more traditional pieces like minted coins or antique stamps, one group of enthusiasts takes the term “collection” to a whole other level with their totally above-average stash of Ouija boards. John Kozik, Treasurer of the Talking Board Historical Society, decided it was time to share his collection, years of research, findings, and knowledge with the public—and thus, the Salem Witch Board Museum was born. If you thought you knew everything there was to know about Ouija, we’re here to say, you may be sadly mistaken.

To no surprise, a museum of this magnitude was not born overnight. Kozik has spent the last twelve years on the hunt for Ouija and talking boards. His love began as a child, watching his grandmother independently use the board. As the planchette seemingly glided automatically from letter to letter, Kozik was fascinated by her connection to the Ouija. Knowing this personal family tie, we were eager to learn more about John’s experiences with the board, but his answer perplexed us—he’s never used one. 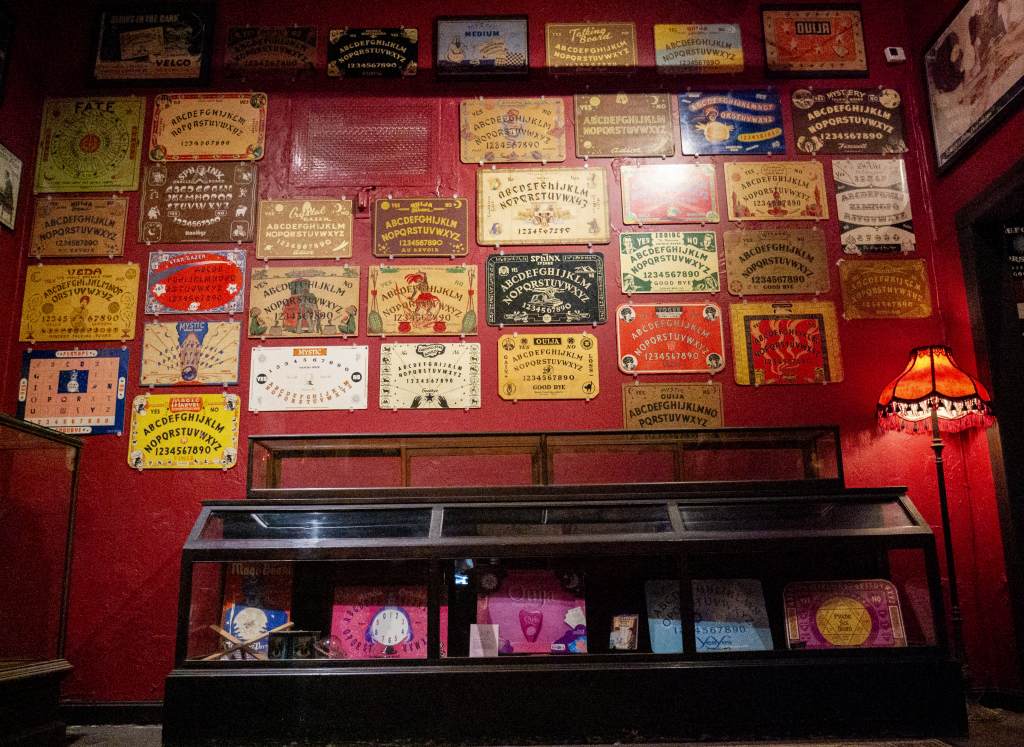 Coming from a man with over 300+ boards hanging in his home and museum, you can see how this news comes as a bit of a shock. His reasoning? Admirable.

“You know when you watch an incredibly talented artist—like Jimi Hendrix—play the guitar and think, ‘Well, why even try? I’ll never be as good as he is.’ That’s how I felt about my grandma with the Ouija.”

And though he’s not an avid user, Kozik is certainly an avid collector. His motto as a collector is to “Leave no stone left unturned,” a mantra proven quite successful in his years of hunting. He’s made himself known to hundreds of shops, antique stores, online vendors, Facebook friends, and passers-by so that, inevitably, when someone, somewhere stumbles across a new Ouija find, the first and only person they go to is Kozik. His plethora of Ouija-seeking friends across the world has been the key to his robust collection—the main ingredient to the Witch Board Museum.

Nestled in the heart of Salem, Massachusetts, between the storefronts of Essex Street, the Salem Witch Board Museum opened its doors this past September. Kozik curated the layout and structure specifically for visitors, giving everyone the ability to truly travel through time with the Ouija board. 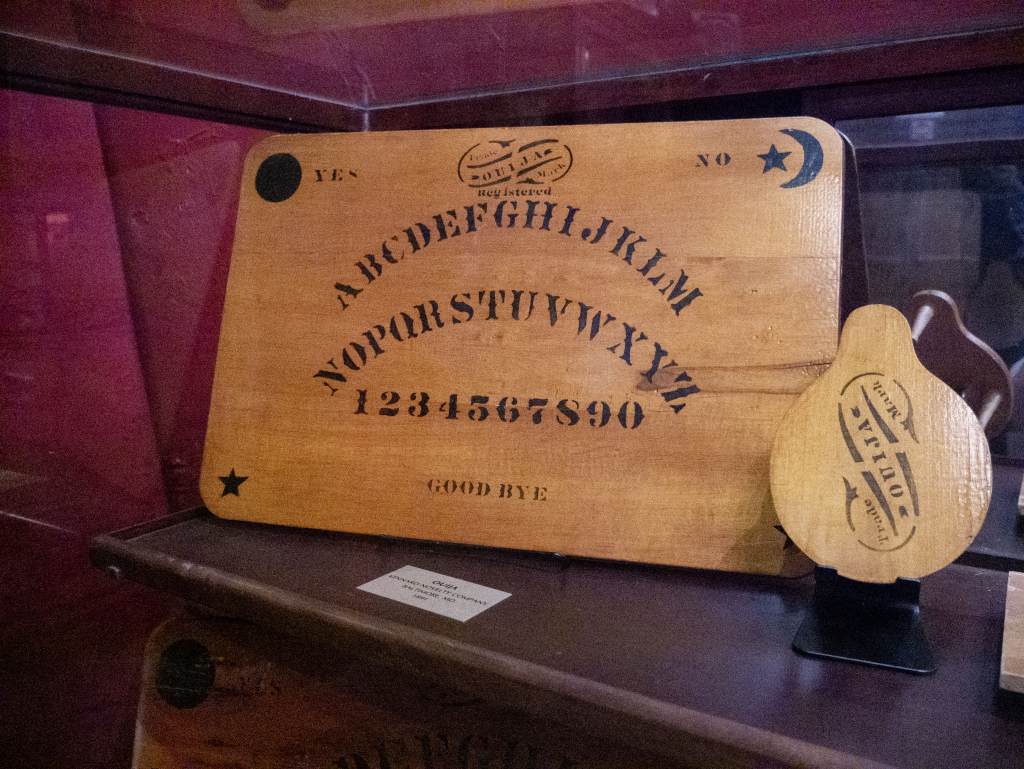 Talking boards are historically significant, having existed in one form or another since shortly after 1848, the birth of Modern Spiritualism. The first glass case upon entry of the museum takes visitors on a journey back to when the earliest handmade board was constructed. While the inventor of the talking board is difficult to truly define, we can date its start of booming popularity back to the wedding of Grover Cleveland.

Here Comes the Board

In 1886, President Grover Cleveland held office and was in the midst of planning his in-house wedding at the White House. Taking full advantage of this potential press opportunity, a Witch Board was sent to Cleveland as a wedding gift.

“I acknowledge with thanks the ‘witch board’ which you sent me as a wedding present. I accept it as an evidence of kind feeling and friendship and can admire it for its ingenuity, but I hardly think that I shall immediately test its power to ‘disclose the past and forecast the future.'”

And though President Cleveland never exercised the powers of the Witch Board while in the Oval Office, the media coverage of this gift, and his response, spring-boarded the popularity of the Ouija everywhere. Believe It or Not!, Kozik’s great-great-grandfather, William Gidley, was actually a part of Grover Cleveland’s secret service—another historically binding thread in Kozik’s family ties to the Ouija.

Aside from President Cleveland’s unintentional press, we can thank Helen Peters Nosworthy for a large chunk of the Ouija’s upbringing.

Not many people know about Nosworthy—the woman responsible for helping to get the board patented. Helen, accompanied by her brother-in-law, Elijah Board, headed to the patent office, talking board in hand. And to no surprise, clerk after clerk refused to grant the patent on this unordinary project until finally, they reached the chief patent clerk—his proposition? “I don’t know you and you don’t know me. If you can tell me my name, using the talking board, I will issue the patent.”

Helen was a strong medium, she used the board, told the clerk his name, and the patent was issued. Months later, Helen asked the board what it would like to be called— it spelled back O-U-I-J-A. With that, the most famous talking board, Ouija, was introduced in 1890 by the Kennard Novelty Company. And from here, the world of Ouija truly exploded.

Moving along to the second case of the museum, the displays begin to depict the “commercialization” and off-brand imitations of the Ouija board. And while many companies attempted to replicate, duplicate, and loop-hole the design with their knockoff brands, each iteration was shut down as a result of the protected patent. 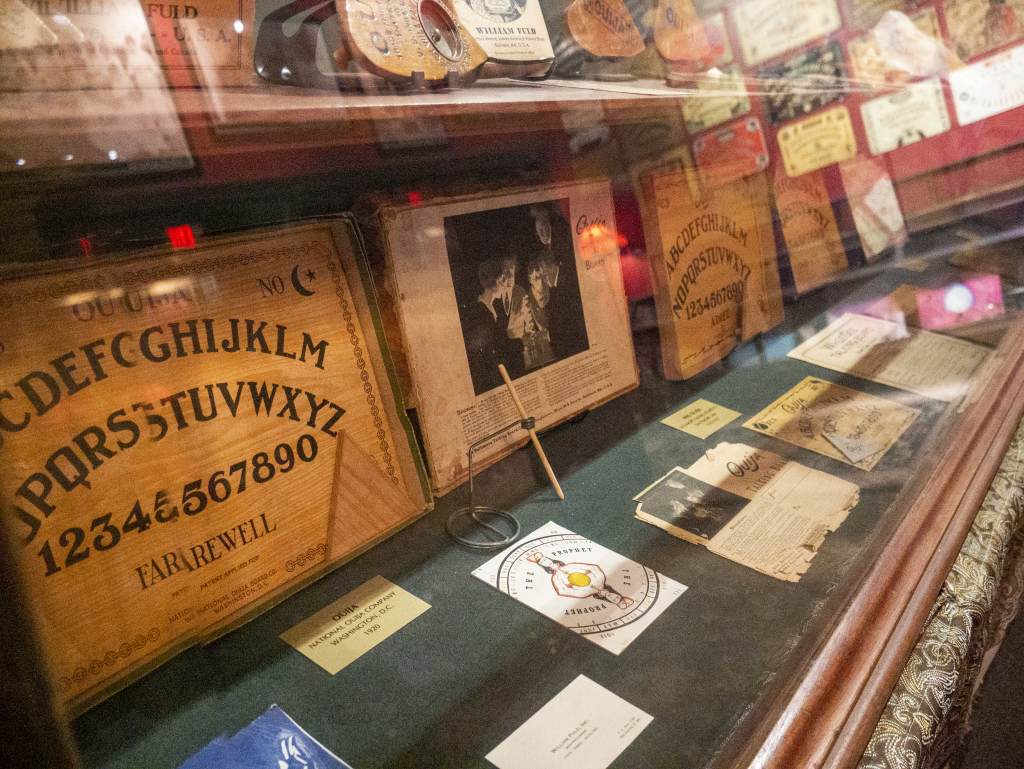 Post-World War II, the Ouija was extremely popular. Advertisements, posters, and ads flooded the media with the board shown in many different contexts. From post-mortem communication with lost loved ones to basement slumber parties to a new means of dating, the board was becoming a common household object. For just $1.50 a pop, the classic wooden piece was selling like hotcakes. And while to the public, it seemed as though the manufacturing companies had a smooth ride to success, there was a feud brewing in the interim. 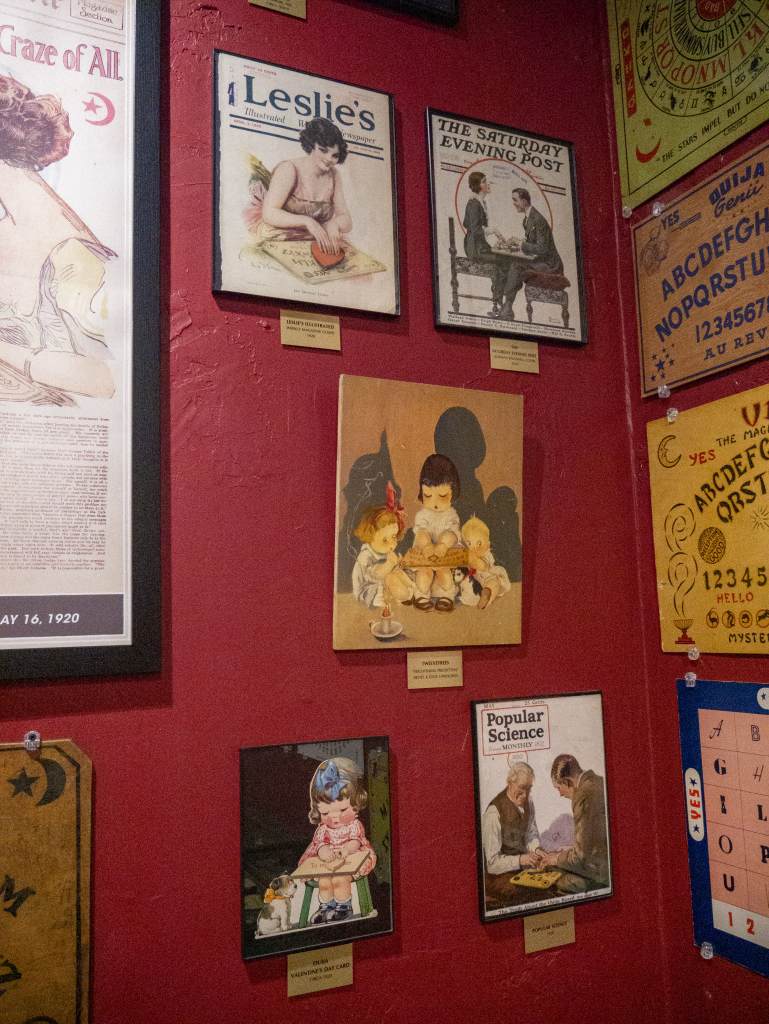 At the time, William Fuld and his brother, Isaac, were producing the Ouija until the two began to butt heads, leaving the family no choice but to part ways. In the meantime, Isaac produced his own iteration of the board called “The Oriole Board,” while both William fought long and hard to hold sole ownership of the Ouija name. The two battled in court for many years. 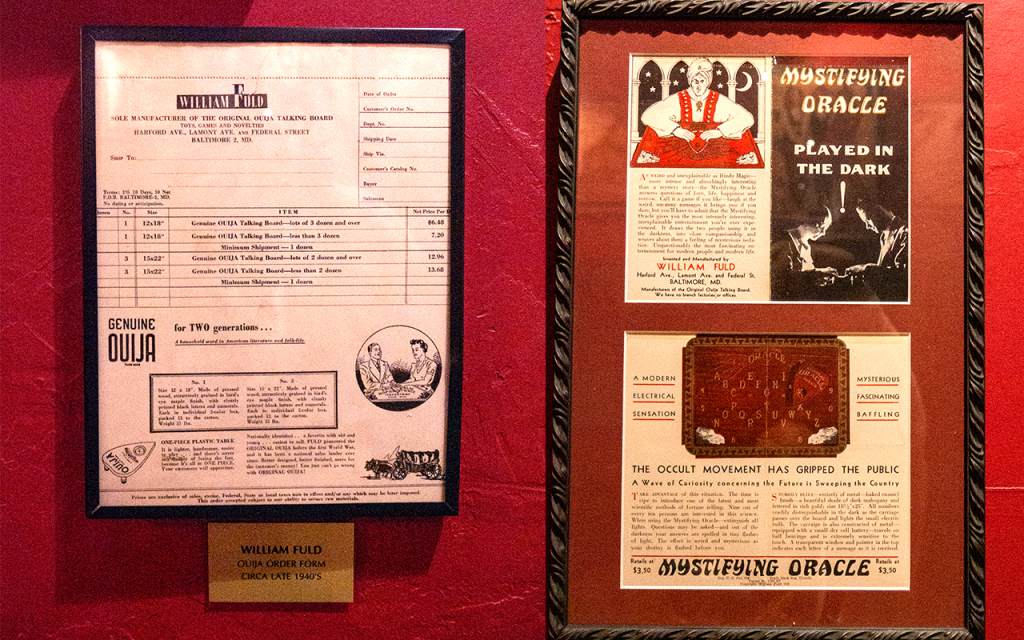 On February 24, 1927, while overseeing the replacement of a flagpole, William Fuld was tragically killed by complications falling from the roof of his three-story Harford, Lamont, and Federal Street factory. He suffered a “concussion of the brain, five fractured ribs, a broken arm, a fractured leg, and numerous cuts and bruises.” An employee, who witnessed the fall, rushed him to the hospital where he later died from one of his broken ribs piercing his heart. His words on his deathbed to the rest of his family:

But despite his dying words, the Fuld family did just that. In 1966, Parker Brothers began manufacturing the board in Salem. It even outsold Monopoly in 1967!

The Fuld family remained divided far past the lifetime of the brothers—96 years of silence. Until one day, a man named Robert Murch reopened the long-closed family book. He had seen the name “William Fuld” on the side of a Ouija box and decided that the Fuld family tree was a great place to start learning more about the board.

As an avid collector himself, Murch began contacting both sides of Fuld grandchildren—separately, of course—to learn the history of Ouija from their perspective. After much back and forth, Murch helped to bridge the gap and rekindle the broken flame of the Fulds, for the sake of the Ouija. He found great success in doing so and even attends their family reunions! Murch was also gifted the pocketwatch of William Fuld from his grandchildren. And while it may seem like a small token of their appreciation, the watch was actually in Fuld’s pocket at the time of his fatal fall—the hands were stopped at his “time of death.”

Robert Murch serves as the Chairman of the Board for the Talking Board Historical Society, which he founded. It was his idea to bring together this eclectic group of talking board enthusiasts. To no surprise, Kozik happily joined this group and is grateful for the role it has played in bringing the Salem Witch Board Museum to life. This corner of history houses some of the earliest boards, dating to the most recent iterations. Guests truly travel through time and across the world when they step through the door of the museum. And while it’s filled to the brim with classics, replicas, and even an original Ouija printing press, Kozik’s favorite board hangs high above the rest: a family heirloom, if you will—his grandmother’s Ouija. 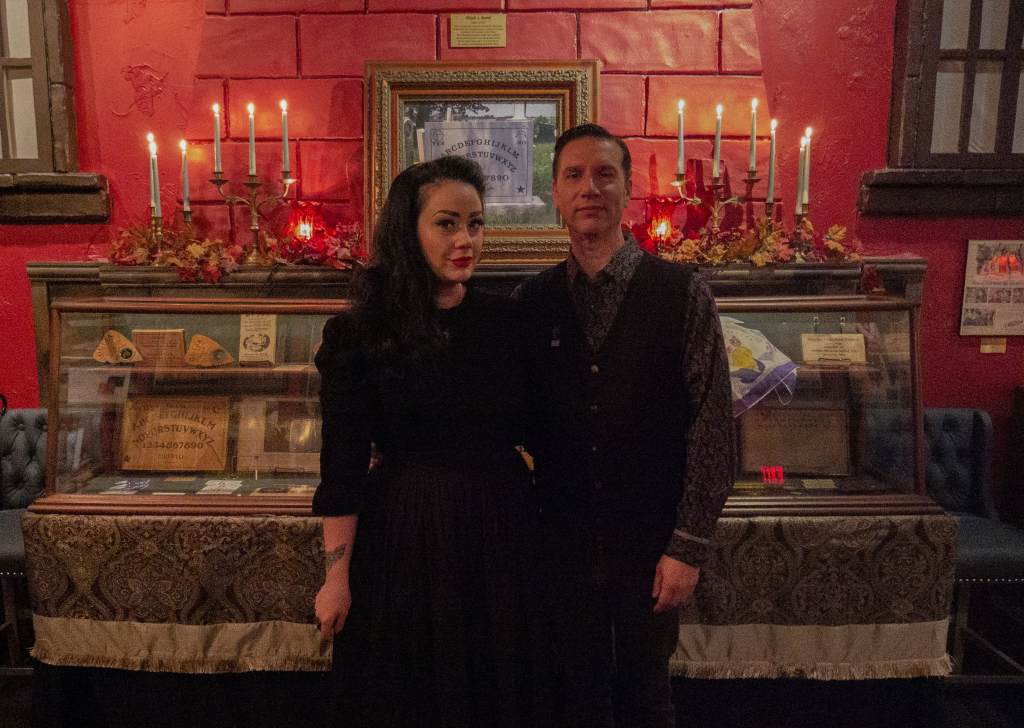 The Ouija board evokes so many different emotions, perceptions, and opinions to those who use it. Some believe it summons all things evil, and some believe in the good. Some perceive the board as a toy and others would consider toying with it a true crime. Some are admirers of the mystery and are intrigued by the stories others tell. And others, are the storytellers themselves. So, whether you’re an enthusiast who loves the unknown, like John, or an avid user and spiritual believer, like his grandmother, it’s safe to say what we have on paper will never fully uncover what lies beneath the Ouija.