Monster Waves Caught Off The Coast Of Portugal

A once sleepy fishing hamlet turned surfer magnet, Nazaré, Portugal, has garnered a reputation for attracting the planet’s most dauntless big wave surfers. 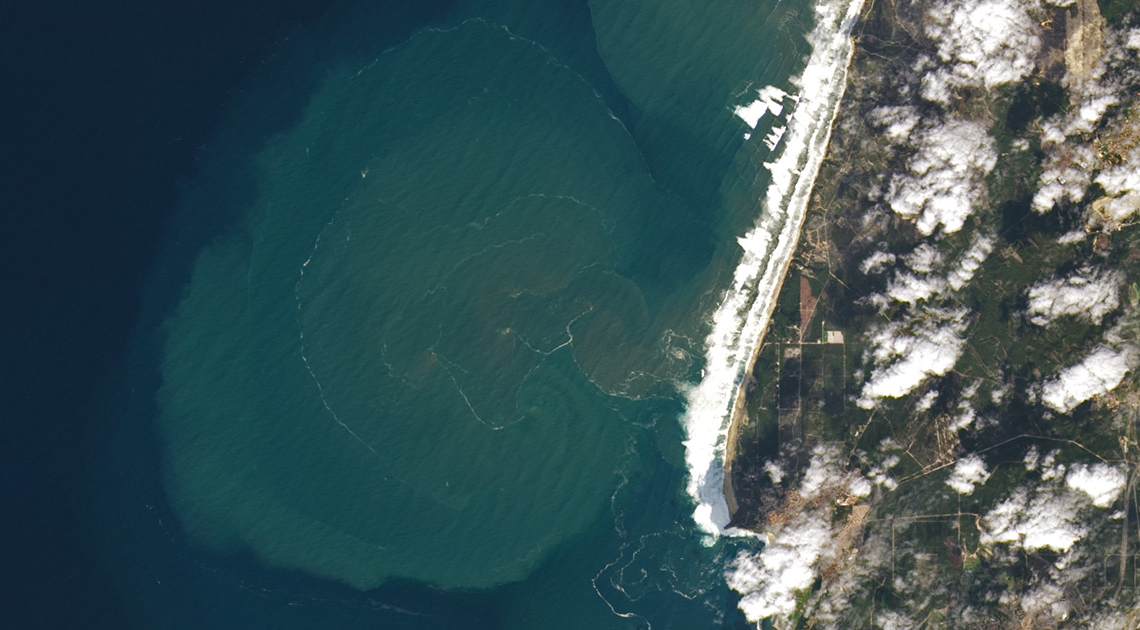 On October 29, 2020, NASA’s Landsat 8 satellite snapped a remarkable series of images of gigantic waves breaking along Praia do Norte (North Beach) in Nazaré. NASA released some of these images in February 2022, noting the thick band of white foam left in the wake of the epic swells off Portugal’s coast. Scientists have determined the waves reached upwards of seven stories high, or more than 100 feet, and stretched for approximately 6.2 miles (10 kilometers) from the beach.

Although Praia do Norte has long attracted big wave surfers, drawn by the promise of catching a monster swell, the end of October 2020 proved beyond anyone’s wildest expectations thanks to Hurricane Epsilon. During the winter, the area boasts waves measuring 50 feet (15 meters) tall, and most surfers are lucky to catch 80-foot (24 meters) behemoths on an extra wild day.

But what makes this event even more remarkable is the fact an 18-year-old surfer named António Laureano paddled into the tumultuous surf that day, riding one of those record-breaking giants.

The Ride of a Lifetime

A once sleepy fishing hamlet turned surfer magnet, Nazaré has garnered a reputation in the 20th and 21st centuries for attracting the planet’s most dauntless big wave surfers. No wonder the quaint destination figures prominently in the HBO documentary 100 Foot Wave, which details Garrett McNamara’s attempts to ride the largest waves worldwide.

António Laureano grew up watching McNamara and dreamed of catching monster water like his role model someday. But it’s safe to say he went well beyond his goal. During his record-breaking ride, it’s estimated that he sliced through a 101.4-foot-high (30.9 meters) wave, the biggest ever surfed. And Laureano was just an 18-something high schooler at the time.

Of course, confirming wave height can prove to be a challenge. But if he receives official recognition, Laureano will hold one of the most coveted and demanding records in the world. After all, conditions must be perfect in places like Praia do Norte to offer such incredible opportunities, and surfers must be highly skilled and at the top of their game.

In Search of the Perfect Wave

Laureano’s odds are helped by the fact he lives locally. But even he was surprised by what he witnessed and experienced that day. Accompanied by his father, Ramon Laureano, neither one had ever recalled seeing such savage surf as that October day. According to Surfer Today, the men headed out on their surfboards to take full advantage of the opportunity presented to them by nature. During the day’s last wave session, Ramon asked António if he wanted to give it one more try, and his son agreed.

He recalls, “As soon as I started to go down the wave, I gained a lot of speed, as I had never gained. It was the greatest luck ever.” Fortunately, they documented the experience on video and have since submitted it for an independent scientific evaluation. Researchers at the University of Lisbon’s Faculty of Human Kinetics studied the wave with great care, eventually calculating that Laureano rode an epic tower of water measuring more than 100 feet tall. That’s 20 feet taller than the current big wave record holder, Rodrigo Koxa.

Look No Further Than Nazaré

There’s no better spot than Nazaré for daredevils like Laureano. That’s because everything about the marine geography of the area breeds epic swells. Off the coast, you’ll find the 143-mile-long (230 km) Nazaré Canyon, measuring 3.1 miles (5 km) deep. When waves move through the area, the deepest parts inside the canyon maintain the same speed as they did on the open ocean.

But the top of the wave slows down. This causes the wave to bend or change direction, and when you get two waves crashing together from opposite directions, it translates into some gargantuan walls of water.

In a study released in June 2020 in Science Advances, researchers revealed that wave intensity at Nazaré has increased by between 5 and 15 percent in recent years. The reason? Stronger currents and winds. If this trend continues, Laureano may have a chance to beat his own record, and NASA could get even more stunning pictures of nature at its most raw.