This left doctors with only one extreme option: transferring feces into his butt—and not even his own...

In the 17th edition of the Ripley’s annual—Mind Blown!—your mind will be blown away by more than 1,200 strange stories, unusual feats, and hair-raising oddities from around the world.

Aside from the colorful in-depth features, the science behind some of the weirdest facts, amazing photographs, and contributions from Ripley’s Believe It or Not! fans, the infographics in the book provide some of the wildest tidbits, tucked away within the pages. Let’s shine a light on one of these Mind Blown! infographics and learn more about Peculiar Prescriptions.

In 1973, an obese 27-year-old Scottish man went on the most extreme diet imaginable, fasting for 382 days under medical supervision. He lost an extraordinary 276 pounds!

If you thought the obsession with men and women’s eating habits was a modern problem—think again. In the Victorian era, there were several cases of young, pre-teen to teenage girls who made names for themselves by refusing food and sometimes even water. These fasting girls were known far and wide for their ability to go long periods without eating and, in some cases, for the magical powers they claimed to possess because of this practice.

Perhaps the most well-known of the fasting girls was Mollie Fancher who was also dubbed the Brooklyn Enigma. Fancher lived from 1848 to 1916, and at 16, she experienced a severe accident where she became caught on a carriage and was dragged behind it, leading to serious side effects. 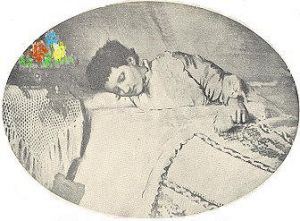 She lost most of her senses like sight, taste, touch, and smell, and she was also paralyzed. If that wasn’t enough, she stopped eating or drinking anything and claimed to have powers such as clairvoyance. People who observed her stated that her stomach collapsed to the point where one could feel her spinal cord on the other side. Fancher started eating again after about 16 years, but no one was able to confirm or deny whether or not she was truly miraculous.

Moving onto some extra calories…

Beer spas are all the buzz in Europe, Japan, and even parts of America, because the yeast in bubbling brews is believed to boast cleansing properties and ease muscle and joint soreness.

But are there actually health benefits to kicking back a few cold ones? Research has proven that beer contains antioxidants and B vitamins, as well as ethanol and silicon, which help prevent osteoporosis and can grow new bone tissue.

For those suffering from sleep apnea, researchers in Switzerland have stumbled upon an effective, albeit impractical, new treatment option—playing the didgeridoo.

Before you just didgeridoo it—the facts:

The didgeridoo is a very long cylindrical wind instrument invented over 1,500 years ago, by Indigenous Australians. In 2009, the results of a Brazilian research study revealed that people who learned to play the didgeridoo had some mild improvement in their sleep apnea, thought to be related to the circular breathing required to play this instrument. This type of breathing allows a didgeridoo player to create continuous sound without interruption, breathing in through the nose and out through the mouth simultaneously, using air that has been stored in the cheeks. Breathing this way is thought to strengthen the muscles in the upper airway, making them less likely to collapse during sleep.

And last, but not least…

The treatment known as fecal bacteriotherapy involves a healthy person donating their poop so it can be liquified and transplanted into a sick person’s rectum, recolonizing their intestines with the healthy donor’s bacterium in the process.

Yes, fecal transplants are a marvel of modern medicine. Just recently, in fact, a 47-year-old man had a transplant to cure his random bouts of drunkenness.

His journey began after a fateful trip to the hospital for intoxication where he tested for 17 times more alcohol in his system than the average person. That’s two times the legal limit! Yet, he hadn’t had anything alcoholic to drink. It turns out it was a raging case of ABS! Scientifically known as auto-brewery syndrome, ABS causes gut fungi and bacteria to ferment contents of the intestines, resulting in alcohol production that causes spontaneous drunkenness.

The anonymous man was sent home from the hospital with the standard prescription of an antifungal drug and a low carb diet but, to no avail, a month later, he was ticketed for driving under the influence. This left doctors with only one extreme option: transferring poop into his butt—and not even his own—a fecal microbiota transplant. This man’s case was so severe, he went for the idea and it worked! It’s been three years since his surgery and the only intoxication he’s experienced has been on his terms!

We told you these were some peculiar prescriptions! For more mind-blowing facts and unbelievably awesome stories, check out the 17th edition of Ripley’s best-selling annual book, Ripley’s Believe It or Not! Mind Blown!