It was a rare sight in the Sahara as snow began to fall, leaving a glistening pattern of ice on the dunes. 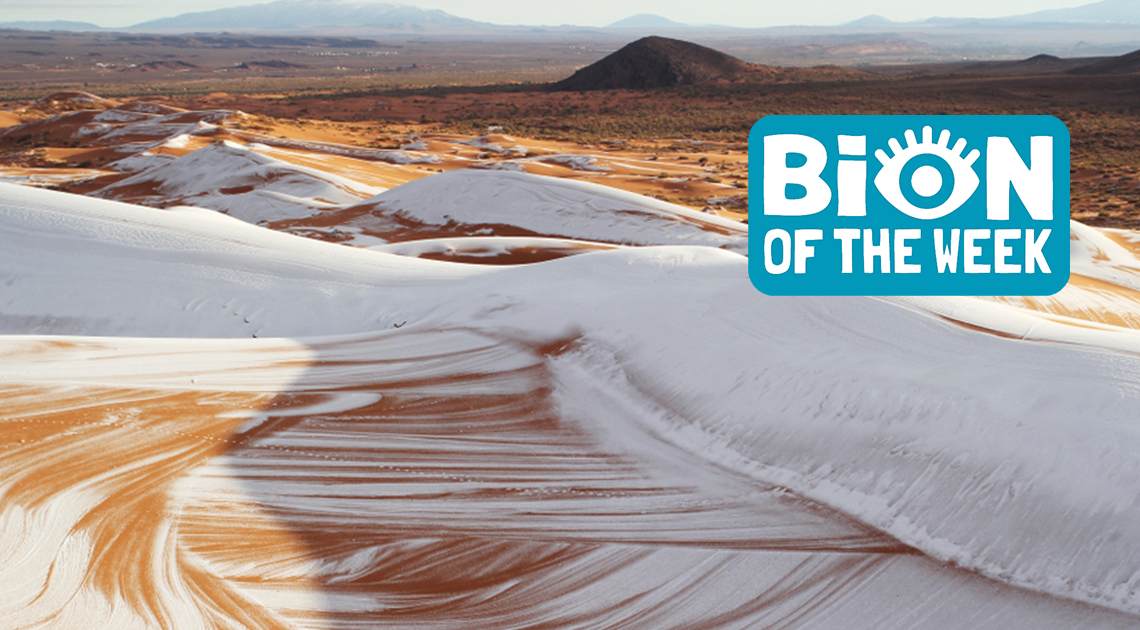 [January 18–January 24, 2021] A mysterious art heist, an Oscar-worthy pup, and a pristine dinosaur butthole—all round-up in this week’s weird news from Ripley’s Believe It or Not!

Italian police had the rare pleasure of cracking a case before it hatched this week when a replica of a famous Leonardo DaVinci painting was returned to a Naples museum before anyone even knew it was missing.

The 16th century copy of DaVinci’s “Salvator Mundi” was last accounted for in January 2020 when the Museodoma San Domenico Maggiore closed its doors due to the COVID-19 pandemic, leading to the astute deduction that it was heisted at some point in the last year.

Though when and how someone broke into the museum is yet to be revealed, Naples prosecutor Giovanni Melillo speculated that “it is plausible that it was a commissioned theft by an organization working in the international art trade.”

Thus far, the only lead comes from a Naples apartment where the painting was unintentionally found while searching an apartment as part of a “larger operation.” According to Naples police chief Alfredo Fabbrocini, the 36-year-old man who owns the apartment, has been arrested after his incredible story of “casually” buying the painting at a market made way for even further suspicion.

While the painting was not created by DaVinci himself, there is evidence to suggest it was painted by one of his students. The copy is a reproduction of the most expensive painting in the world, which sold for a cool $450 million in 2017.

Italian police have recovered a copy of Leonardo da Vinci’s 16th century “Salvator Mundi” painting that was stolen from a church during the pandemic. https://t.co/VlTsXAarQe

A Toronto woman is living proof that dreams take time, and time is money, after hitting the jackpot to the tune of almost $50 million using lottery numbers that came to her husband in his sleep 20 years ago—on a free ticket, no less!

Deng Pravatoudom was running errands at a nearby mall when she stopped to check her Lotto Max ticket. From this, she was granted another free ticket to play. Just a few days later, that free ticket turned into $47.1 million and a world of possibilities for the 57-year-old mother.

The life-changing winnings have brought hope to Praratoudom, who had a particularly difficult year leading up to her December score after being laid off last spring due to the pandemic.

Pravatoudom shared her big plans for the money while celebrating at Lotto Max’s first-ever “virtual winner celebration,” where she held up a giant check while being showered in confetti.

“With this money, I will be capable of helping my children out more. Whatever they want, I will be able to buy for them, a car and new clothes,” she said.

As for treating herself, Pravatoudom plans to buy a house and travel the world—when it’s safe, of course.

57 year old Deng Pravatoudom picked up her $60 million cheque at the Ontario Lottery and Gaming prize centre yesterday. Pravatoudom has apparently played the same lotto numbers for 20 years because they came to her husband in a dream. pic.twitter.com/J0sUAMKkRj

Veterinary bills can be a nightmare, but a worthy one to keep your beloved pet in good health. Imagine your surprise if you paid good money to have your dog’s ailment examined, only to find out he was faking it the whole time.

Such was the case for Russell Jones, of London, when he noticed his dog, Billy, was walking a little funny. Jones posted a quick video of Billy on Facebook, hopping next to him with one of his front paws raised, then set out to figure out the cause.

After an examination, x-rays, and $400, Jones was shocked to find out that Billy was simply trying to be like him. You see, Jones had broken his ankle and had been getting around on crutches. Only then did he realize Billy’s limp had begun the day after his own injury.

In summation: we don’t deserve dogs.

this dog owner spent $400 to find out why his dog was limping only to learn he was copying him out of sympathy
(jukin copyright management) pic.twitter.com/E1KahhJFEV

If you’re one of the many people who have ever wondered how dinosaurs poop, consider this your lucky day because Coastal Biology has released an extraordinarily detailed study on the first dinosaur butthole ever discovered.

Jakob Vinther, a paleontologist at the University of Bristol, has dedicated his entire career to studying the anatomy of dinosaurs—a field typically dependent on fossilized bones that have been able to withstand the test of time, unlike their soft tissue counterparts.

It was business as usual for Vinther until a few years ago when working on a Psittacosaurs, a small dog-sized dino related to Triceratops, at the Senckenberg Natural History Museum in Germany. While making his way into the nitty-gritty of the 120-million-year-old fossil, he realized this special specimen had a pristinely preserved nether region.

After assembling a team to do a deep dive into the dinosaur derrière—or cloacal vent, as mature adults call it—Vintner has deemed his find a hiney unlike any other, referring to it as “a Swiss Army knife of excretory openings.” Pooping, peeing, breeding, laying eggs—even attracting a mate—this tough tushy did it all!

“It took a long while before we got around to finish it off because no one has ever cared about comparing the exterior of cloacal openings of living animals, so it was largely unchartered territory,” said Vinther.

While the dinosaur’s rawr end has similar features to that of birds, alligators, and crocodiles, Vinther said, “it’s its own cloaca, shaped in its perfect, unique way.”

Paleontologists finally have their first good look at a dinosaur butthole https://t.co/lDOmqyvsWN

It was a rare sight in the Sahara Desert this week as the temperature dropped to 27 degrees Fahrenheit and snow began to fall, leaving a glistening pattern of ice on the dunes.

Although the desert’s temperatures have been shifting for thousands of years, snow in the Algerian town of Ain Sefra is still uncommon, with this occurrence marking only the fourth time they’ve seen it in the past 42 years.

On the odd occasion snow does make its way to the Naama province, it means business. This light dusting paled compared to previous snowfalls, including one in 2018, when a storm dumped 15 inches of snow in the region. Even more impressive was a blizzard the year before, which left the area covered in snow up to three feet high. Back in 1979, the snowstorm was so bad, it stopped traffic!

Known as “the gateway to the desert,” Ain Sefra is situated at about 3,280 feet above sea level and typically experiences an average temperature of 57 degrees Fahrenheit in Jan., with summer highs averaging 100F.