He struggled to fit through doorways, and his mother had furniture made especially for him so he felt comfortable at home. 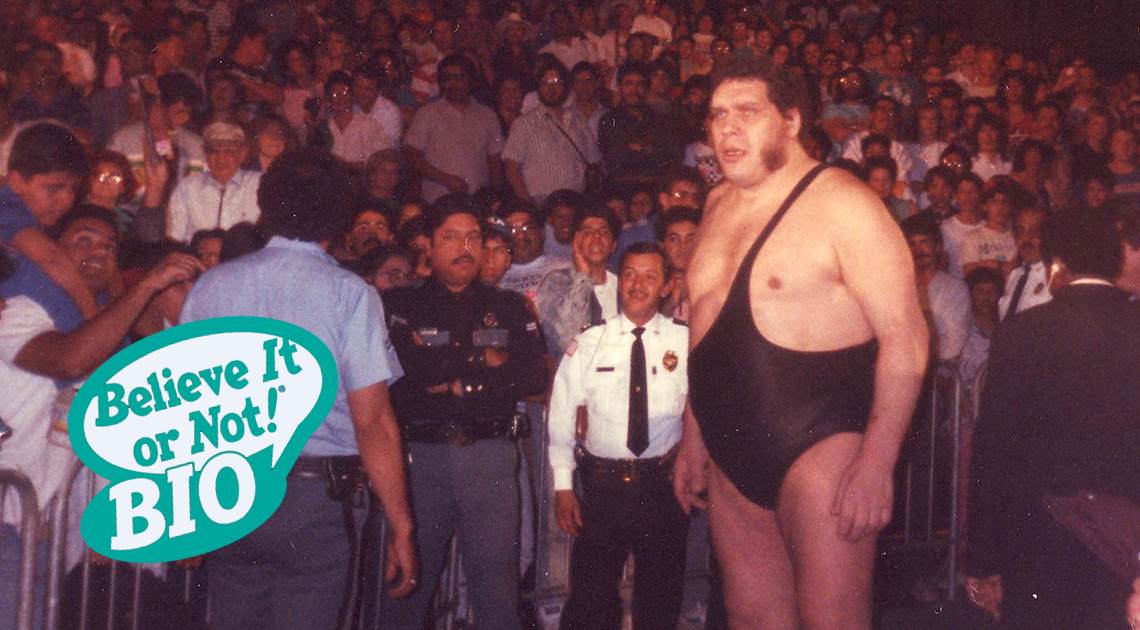 André the Giant is one of the most famous names in wrestling: a giant both in stature and in personality. Had he still been alive today, he would be celebrating his 75th birthday on May 19, 2021. Unfortunately, André died in middle age due to complications related to his enormous proportions.

Though André passed away nearly three decades ago, his indomitable spirit and legacy live on. This larger-than-life figure left an imprint on the world that won’t be forgotten anytime soon, even when those who knew him personally are long gone.

While you may know the basic facts about André, you may not know how he handled living in a world designed for regular-sized folk. Check out some fascinating facts about this gentle giant below.

His fingers were so wide that he could fit a silver dollar inside his rings.

One trait that really caught people’s attention was the size of André’s hands. They were long, wide, and simply enormous. Similar to his feet, André’s hands were so thick that they almost looked like paws. His fingers were so big around that the ring he wore had an opening that could easily fit a silver dollar, which is 38.1 mm. To put the size into perspective, an average man’s finger is about 10-11 mm around.

André, who was reportedly 7’4” tall at his prime and weighed as much as 520 pounds, had gigantism due to his pituitary gland producing too much growth hormone, and he later developed acromegaly. People with gigantism have very big hands and feet (he wore a size 24 shoe), thick toes and fingers, a prominent jaw and forehead, and coarse facial features.

He struggled to fit through doorways, and his mother had furniture made especially for him so he felt comfortable at home.

Born André René Roussimoff in Moliens, France, André’s parents were immigrants. His father, Boris, was Bulgarian, while his mother, Marianne, was Polish. During the filming of “André the Giant” on HBO, director Jason Hehir visited the wrestler’s hometown and was able to see the house where he grew up. As you might imagine, it wasn’t have been easy for André to live in a home built for normal-sized people. As a result, his family did their best to make accommodations for the young man.

In addition to photos and memorabilia, Hehir was able to take a look at the huge chair that André’s mother made for her son. “André the Giant is a mythical character, but André  Roussimoff is a mother’s son, and she wanted him to be comfortable when he came home,” Hehir told Business Insider. “She had that made for him. He was still her baby though he could barely fit through the door.”

For years a legend has circulated that 12-year-old André—who was 6’3” and over 200 pounds at the time—would hitch a ride to school with famous playwright Samuel Beckett on the back of his truck because the school bus was too small. Even André told the tale, which eventually became an off-Broadway play. But according to one of André’s brothers, that’s not exactly how things went down.

While André and Beckett were indeed neighbors, the town did not have a school bus, so André had to walk two kilometers to the center of town every day. However, if Beckett happened to be driving by André and other children as they traveled to or from class, he generously let them hop in the bed of his truck for the short drive. Beckett and André, however, didn’t have a special bond or unique relationship, which people have been led to believe for years. They occasionally talked about their shared love of cricket, but not much else.

André could eat 12 steaks and 15 lobsters in one sitting.

André’s eating and drinking exploits are legendary. Wrestler Mike Graham once claimed his friend drank 156 beers during one night out, and Graham’s “Legends of Wrestling” co-panelists corroborated the story. Journalist Bill Apter also recalled seeing André down over 125 beers when they hung out in New Orleans together.

Though it’s tough to prove these types of claims, over the years many friends and colleagues told similar tales, so it seems plausible.

“He could drink an airplane dry before it got to takeoff,” White explained. “He’d go into a restaurant and eat 12 steaks and 15 lobsters. He didn’t do that often, but if he felt like putting on a show and having some laughs, he’d go ahead and do that.”

However, his typical meals were not so lavish, and he usually only consumed about twice what the average man eats during a typical breakfast, lunch, or dinner.

André’s parents didn’t recognize their son when he returned home after a five-year absence.

As a young boy, André had big dreams that his father tried to dampen. While working alongside his father, Boris, André once took notice of a Rolls-Royce driving by. He claimed that one day, he would own one of the luxury vehicles himself, but his father chided him for having unrealistic expectations.

Two years later, at age 14, André was tired of farm life and decided to leave his family and hometown to make a different kind of living. He wanted to travel, meet new people, and be successful.

He returned five years later and looked shockingly different. When his mother answered a knock at the door, she was greeted by a gigantic man with an even bigger smile on his face. When André asked to see the man of the house, Marianne called for Boris, and the two were still unaware of their own son’s presence on their doorstep.

André even gestured to his very own Rolls-Royce parked behind him, and yet Marianne and Boris still had yet to bat an eye. His mother eventually recognized him as wrestler Jean Ferrè (his stage name) before Boris realized that their son had returned home after several years of starting a new career.

A jokester at heart, André loved to play pranks on his friends.

Fellow wrestler Frank Valois got to know André when he first started competing, and he was very impressed by the young man’s strength as well as his charisma and penchant for having a good time. André transformed from a poor country boy to a man who traveled all over the world, socialized with all kinds of people, and had a great time enjoying life.

In his 20s, André was tall, strong, and intimidating to people both in and out of the ring. And when he wasn’t channeling his energy during competition, he did so in other creative ways.

At one point, André figured out he had the ability to move small cars without any assistance. And by “move,” he could completely relocate the vehicle. He thought it would be funny to play pranks on his friends while they were inside a bar or at a restaurant. Sometimes André would move their vehicles into really tight spots between a lamppost or building, or he would simply reverse their direction. It wasn’t about proving his strength, according to Valois. It was about teasing his pals.

André was grateful for his life but also wished to be a regular-sized man.

Due to his condition, André was likely aware that he would not reach old age. When successfully treated, some people with gigantism can live a normal lifespan. Yet, André refused medical intervention in the 1980s because he believed God made him that way for a reason. He lived a full life after leaving home and was happy with the friends he made and the places he’d seen.

However, he also acknowledged the difficulties that went with being so large. Even simple activities like riding in a car caused pain between his neck, back, and shoulders.  Plus, he was constantly grilled by fans about his height, weight, and other personal matters. While he was generally polite and wanted to please those around him, he was also a little melancholy.

“I would give much money to be able to spend one day per week as a man of regular size,” he once admitted. “I would shop, and I would go to the cinema, and drive around in a sports car and walk down Fifth Avenue and stare at the other people for a change.” 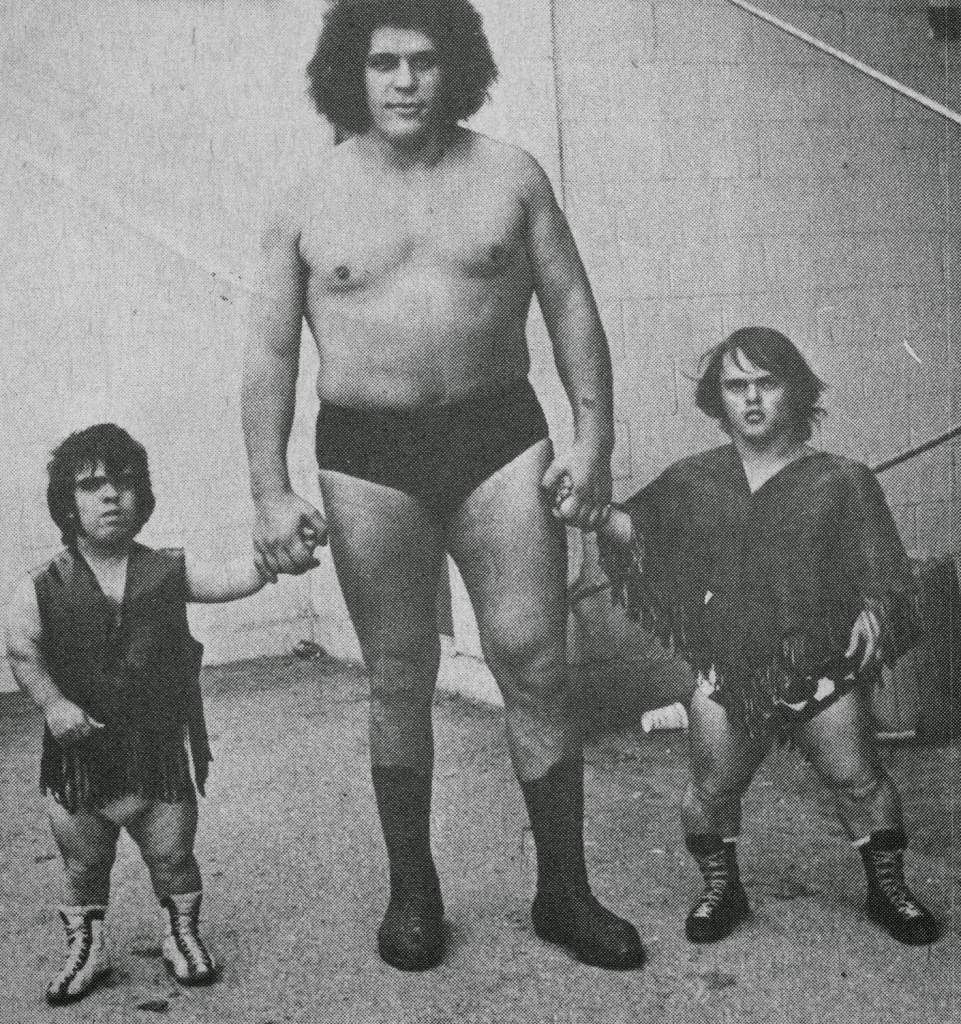 André died in his sleep on Jan. 27, 1993, in the Hotel De La Tremoille in Paris at the age of 46. He arrived in the city two days earlier to attend his father’s funeral. André’s cause of death was congestive heart failure, which is not surprising as people with acromegaly commonly experience organ deterioration over time.

André wanted to be cremated, but local crematoriums in Paris were unable to accommodate a body so large, so it was flown to the United States. His cremated ashes weighed 17 pounds, and friend and former referee Frenchy Bernard scattered them while riding horseback on the 46-acre Roussimoff family ranch in Ellerbe, North Carolina. Hulk Hogan delivered the eulogy.

If you visit Ellerbe today, the Rankin Museum of American Heritage pays homage to André with a special collection that includes his giant wrestling boots and other memorabilia.

Next post Kitbashed Blaster: How Han Solo’s Iconic Weapon Was Made