Beauty And Brawn: How Female Circus Performers Rewrote The Rules

From sharpshooters to human cannonballs, check out these gender-role-defying entertainers of the 19th and 20th centuries. 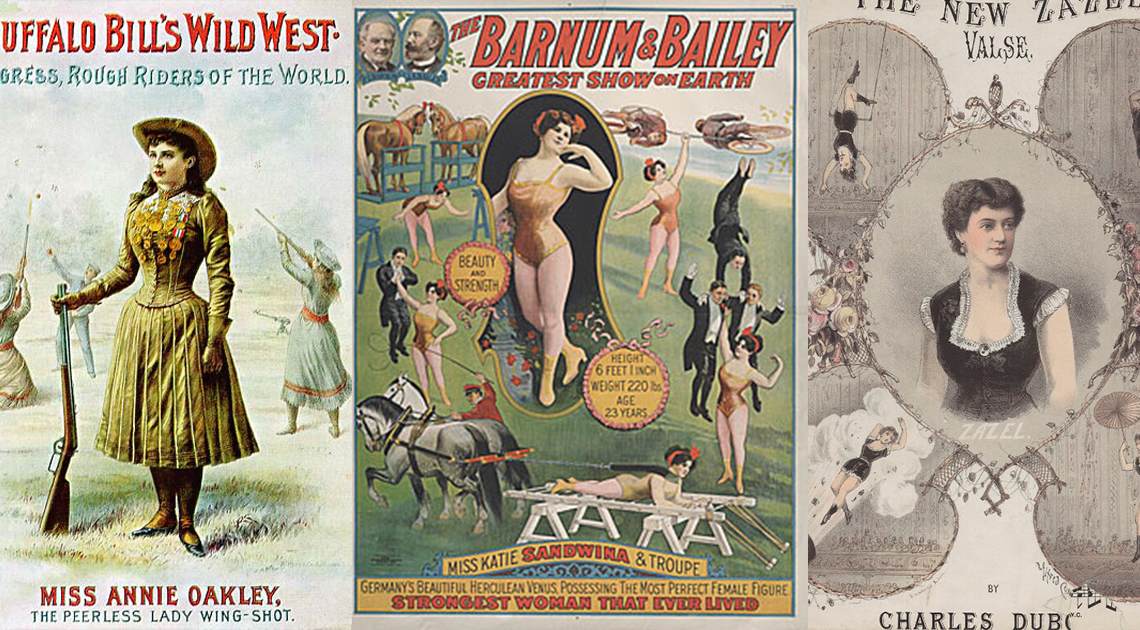 Some women have always been fierce and fearless creatures, refusing to fit into the dainty, delicate molds prescribed for them by society. These daring females refused to bow to expectations, forging their own paths. Along the way, some launched wildly popular careers, typified by both beauty and brawn. From sharpshooters to human cannonballs, check out these gender-role-defying entertainers of the 19th and 20th centuries.

On July 8, 1876, Maria Spelterini awed crowds by walking across Niagara Falls on a tightrope measuring just 2.5 inches wide. The first in a series of stunts to commemorate America’s centennial, Spelterini would raise the bar significantly four days later when she returned for another round at the treacherous crossing. Only this time, she upped the ante by completing the walk with peach baskets tied to her feet!

Seven days later, she traversed the falls with a paper bag over her head, completing the walk blindfolded. Just three days later, she shimmied across the Niagara Gorge once more, her ankles and wrists bound by shackles. As if that wasn’t enough, Spelterini also crossed the narrow trek backward, skipping and dancing across the tightrope’s 1,000-foot length to the wonder of onlookers. 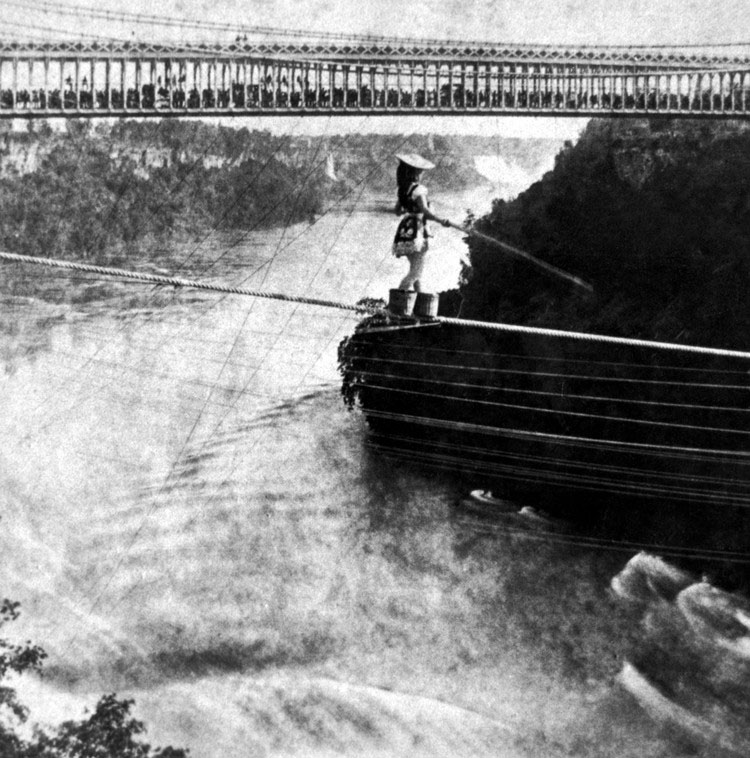 Maria Spelterini walking across a tightrope across the Niagara Gorge, from the United States side to Canada, with her feet in peach baskets. || From the Niagara Falls Public Library. The original image is a stereograph published in 1876.

Katharina Brumbach hailed from a family of Austrian circus stars and began performing feats of strength at a young age. Over the years, her physique developed, further cementing her career as a circus strongwoman. By the time she hit her teens, she weighed 187 pounds and stood six feet tall, which meant a natural entree into other entertainment, including wrestling men.

During circus acts, she would invite a male volunteer onto the stage for a match and the chance to win a 100-German-mark prize. She never lost a wrestling contest. One night, Katie faced off against a young man named Max Heymann, prevailing in the competition but losing her heart. They soon married, and Heymann joined the family performing business. Later, Heymann and their infant son would happily submit to being hoisted into the air, supported by one of Katie’s muscle-bound arms. 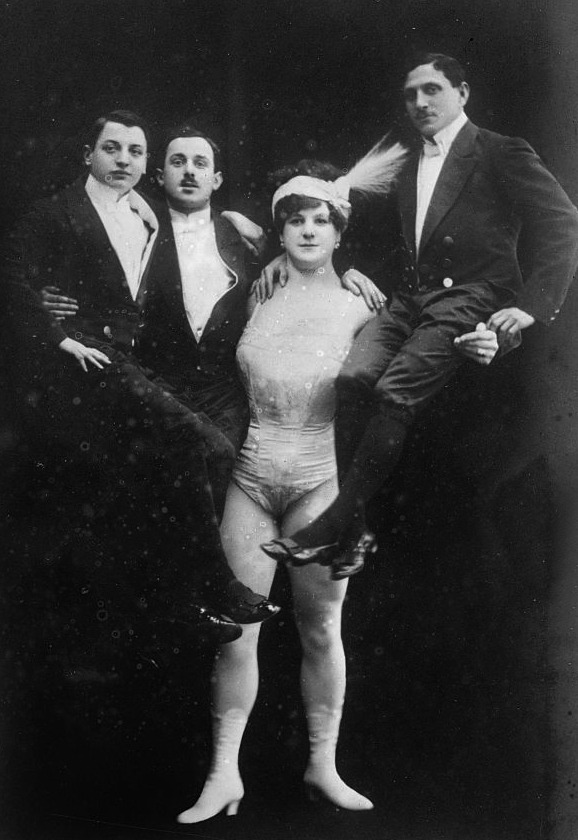 But perhaps Katie’s greatest act remained beating Eugene Sandow, a renowned strongman, at his own game. According to contemporary accounts, she bested him publicly by lifting 300 pounds over her head, one-armed. As for Sandow? He couldn’t get the weight up past his chest. In commemoration of her Herculean victory, she changed her stage name to the female version of “Sandow.”

A pretty, petite performer, Rossa Matilda Richter’s career as a tightrope walker and acrobat started conventionally enough. But everything changed for Zazel, as she was known on stage, at the age of 16 years old. That’s when she first squeezed her tiny body into a massive cannon’s mouth, getting blasted 70 feet into the air. The stunt marked a collaboration between her and her mentor, William Leonard Hunt, and it stunned audiences. 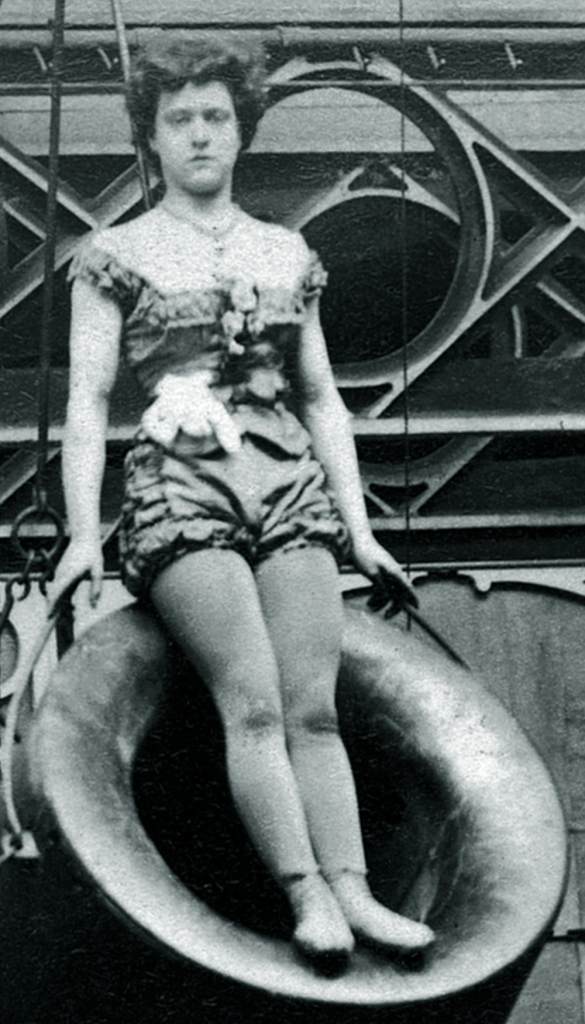 Zazel posing with her cannon at the Royal Aquarium in 1877. || Credited to London Stereoscopic and Photographic Company

How did she get shot from a cannon without being blown to smithereens? Fireworks created the illusion of an explosion. But what launched Zazel high into the air was a system of springs and tension concealed within the metal barrel. Over time, Zazel made the switch to compressed air, removing much of the risk from the act. Soon, other performers worldwide replicated her stunt. Zazel eventually blasted into retirement after missing the safety net and breaking her back during a show, but her trademark trick remains a staple of circus shows. 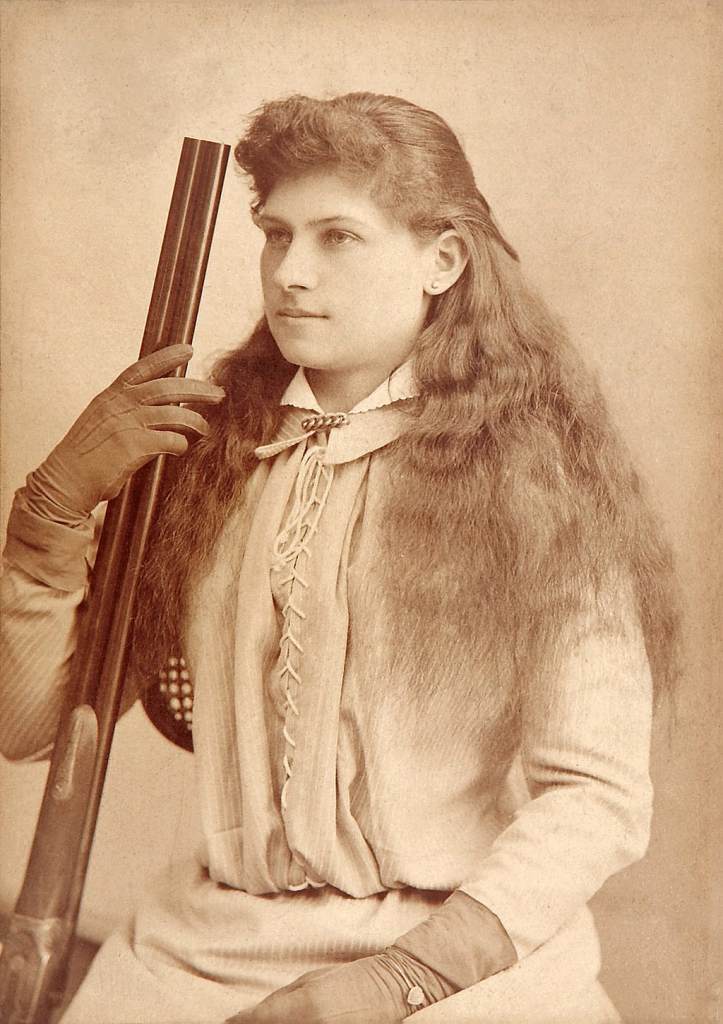 Soon, the couple married, combining their acts. Butler took spousal faith to the next level by permitting his wife to regularly shoot the tip from a cigarette pursed between his lips. In 1890, she performed the same feat in Berlin. This time, using her Colt .45 to dust the ash off a cigar held in Kaiser Wilhelm II’s mouth. With the launch of WWI in 1914, Oakley wrote the Kaiser an unanswered letter asking for another chance at the shot. After all, had she proven less eagle-eyed the first time around, the war might have never started.

Previous post Could Bigfoot Be Deemed 'Real' In Our Lifetime? Possibly!