The Grave Symbolism Of Cemeteries

Some grave carvings were symbols of the dead's summoning to hell. 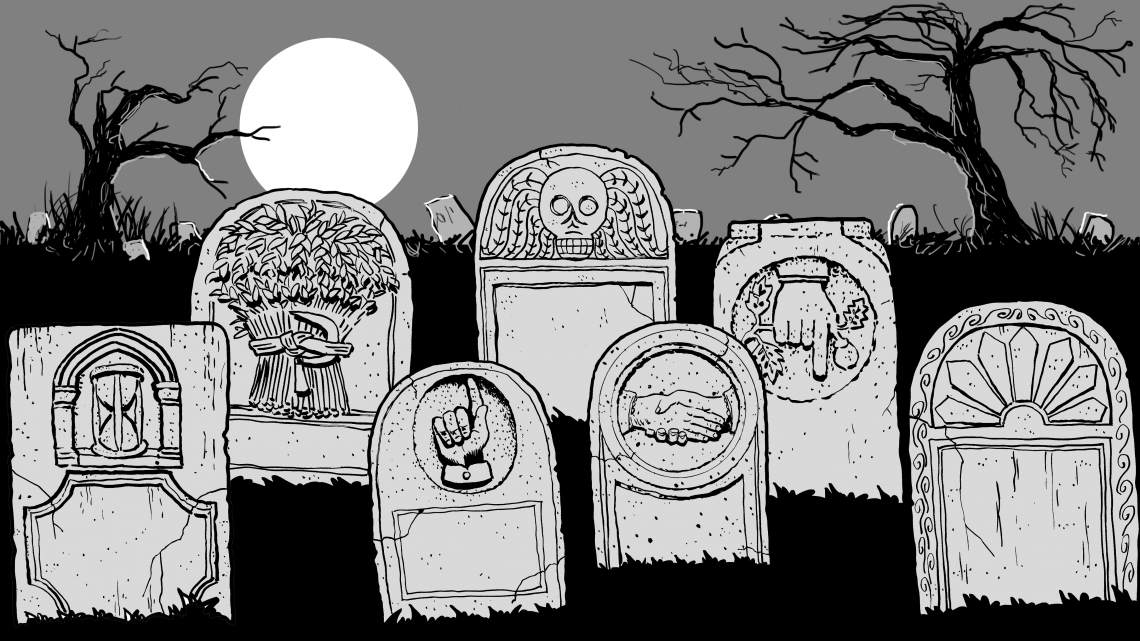 If you’ve ever taken a casual stroll through a cemetery—because, who hasn’t?— it’s easy to see variety in headstone design. Usually created by the loved ones of the deceased, the engravings atop the granite can tell a lot about the person buried beneath it. But, kind parting words and loving goodbyes weren’t always the standard procedure. In fact, some grave carvings were symbols of the dead’s summoning to hell. Here’s the deadly scoop on cemetery symbolism.

When some of the first cemeteries began popping up in the 1600s, Puritanism was the mainstream religion. Puritans were very much removed from the beliefs and practices of the Roman Catholic Church. Refusing to display the same religious symbols, the Puritans created engravings and designs more closely aligned with their own beliefs. Puritans were adamant about not attributing human characteristics to spiritual beings, such as God and angels. Which is why you won’t find any cherubic cheeks smiling at you in 17th-century grave carvings. Symbols became literal translations of family harmony or drama—death’s heads, rising and setting suns, and pointing hands were all common embellishments. 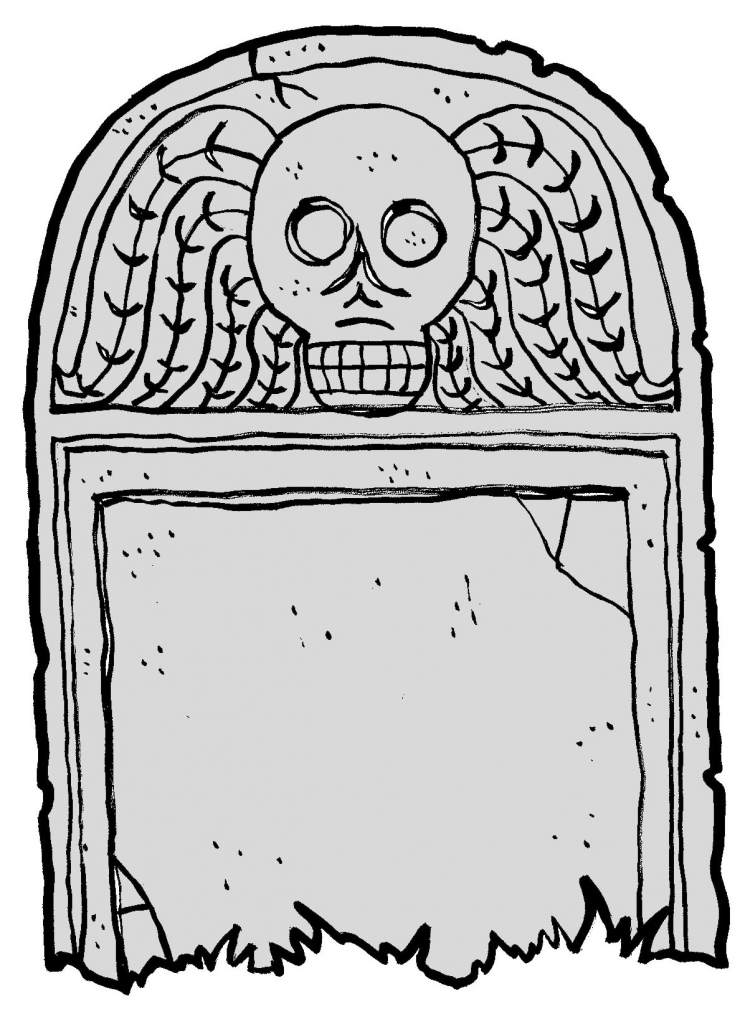 The first of many headstone symbols, the death’s head was created as a result of the Puritanical bleak view of life and death. Adorning the top of a stone, the death’s head is a simple skull with wings. As you may imagine, the skull stood for physical death while the wings embodied spiritual resurrection. Occasionally the wings were replaced with crossbones, and in some instances, a skull with no wings or bones was a statement of mortality.

The hourglass represents the passing and stopping of time. If the hourglass is shown on its side, it symbolizes the fact that the deceased had passed unexpectedly. To make things more morbid, carvers would occasionally add wings to the hourglass to say that “time flies.” 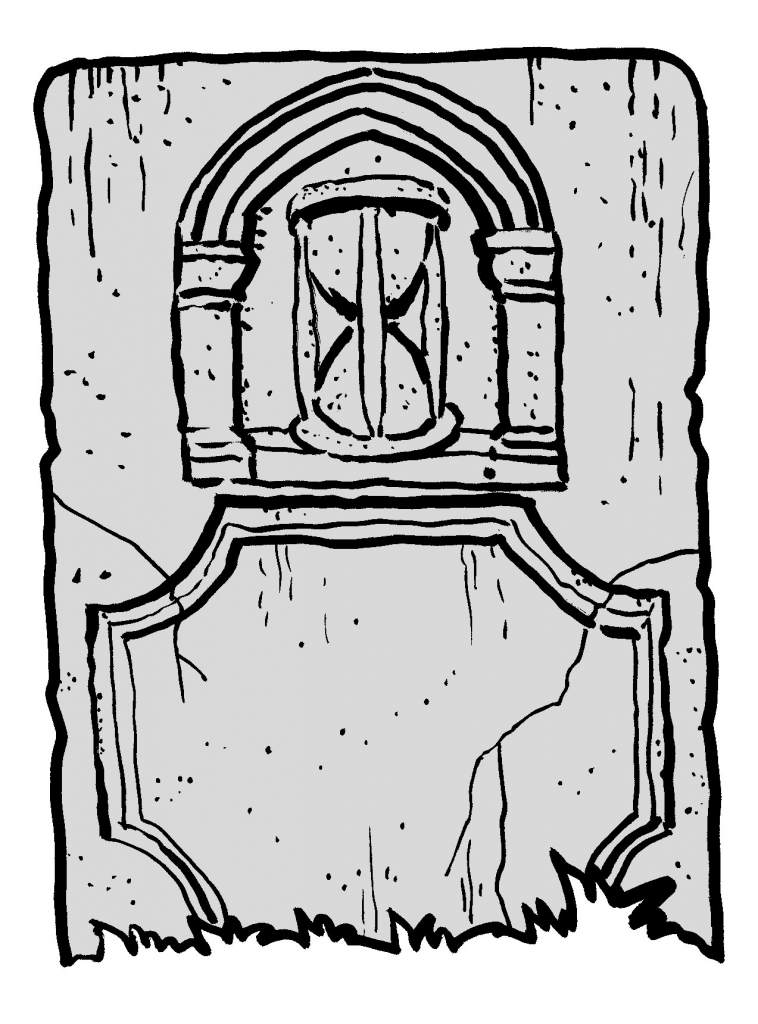 Contrary to modern-day views, in the 17th century, people didn’t fear death. The Grim Reaper, his scythe, and the ticking away of time were common images used to symbolize an inevitable part of life: the end. The mindset about death was solemn, and Puritans would contemplate mortality and the fleeting nature of life by understanding that God was in control of death—there was no purpose for fighting it.

To exemplify their earthly connection, Puritans positioned either the rising or setting sun in their carvings. However, the two symbols held wildly different meanings. 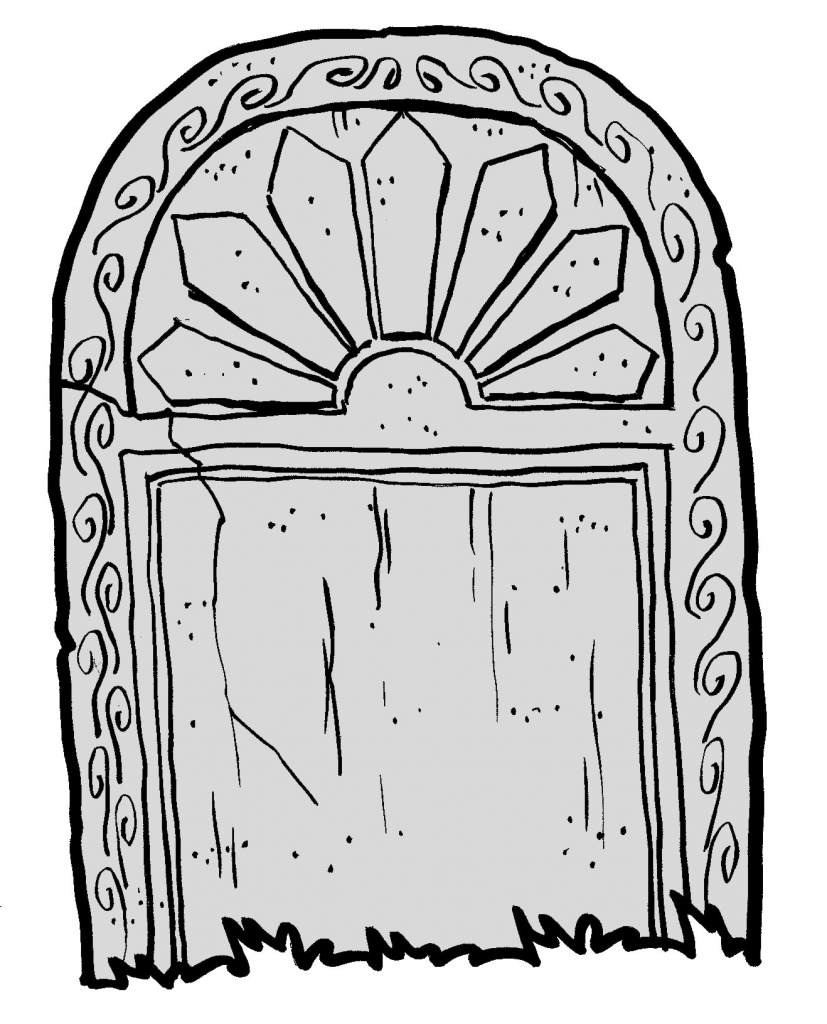 A rising sun represented the family’s hope that the deceased would be resurrected. While, on the contrary, a setting sun meant that the family believed there was no hope for the poor soul. 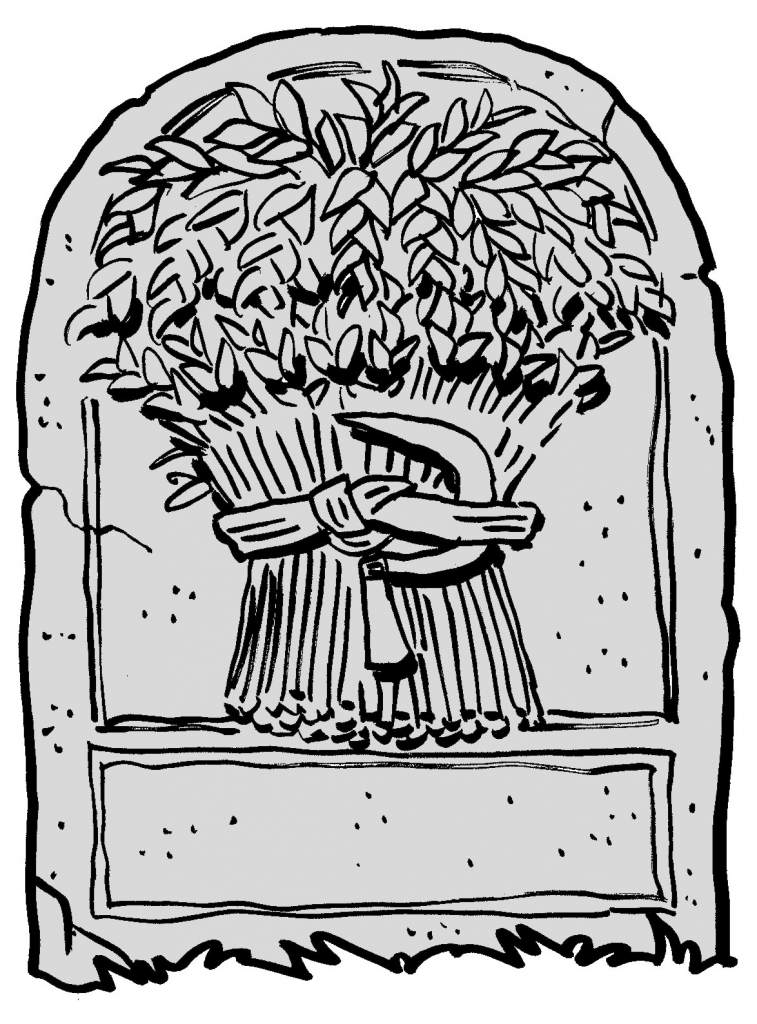 A bushel of wheat shared meaning with the rising sun. In addition to a hopeful resurrection, the wheat also represents a bountiful and joyous life and was typically carved on the stones of farmers.

With three possible gestures, hands were used to signify the spiritual views of the departed. A hand pointing up meant the family believed the dead would ascend to heaven. 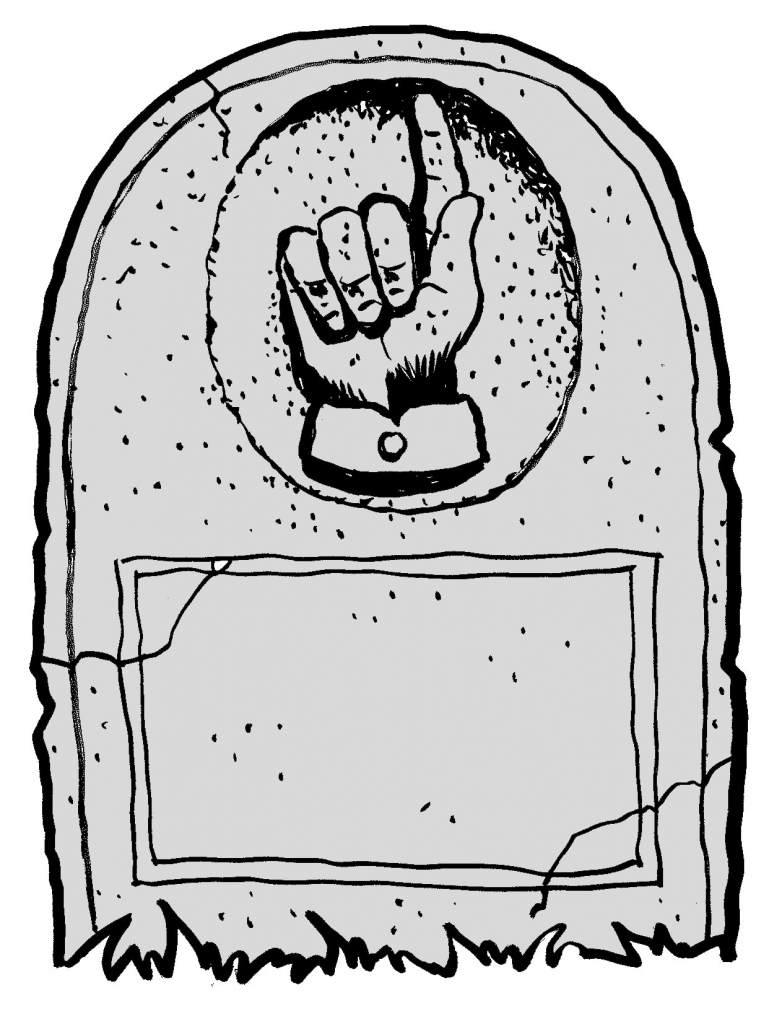 But, a hand pointing down meant the family was requesting that God pull their soul from hell to heaven, usually following a sudden death. 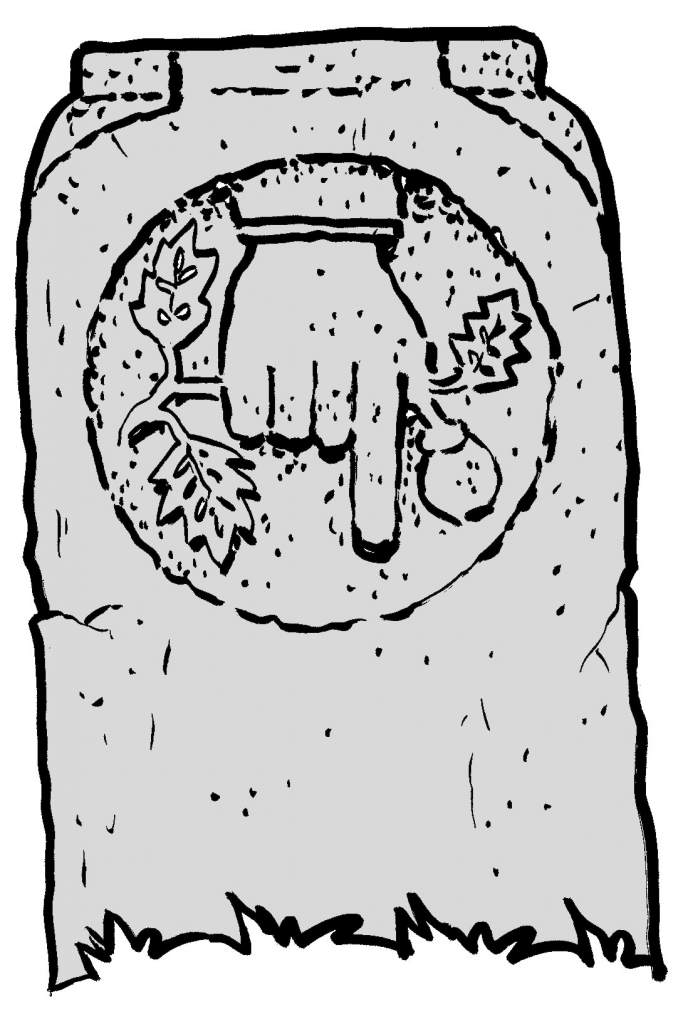 Hands embraced in a shake were the most neutral of the gestures, as they simply meant “Goodbye.” Shaking hands were typically used when the family knew death was approaching. 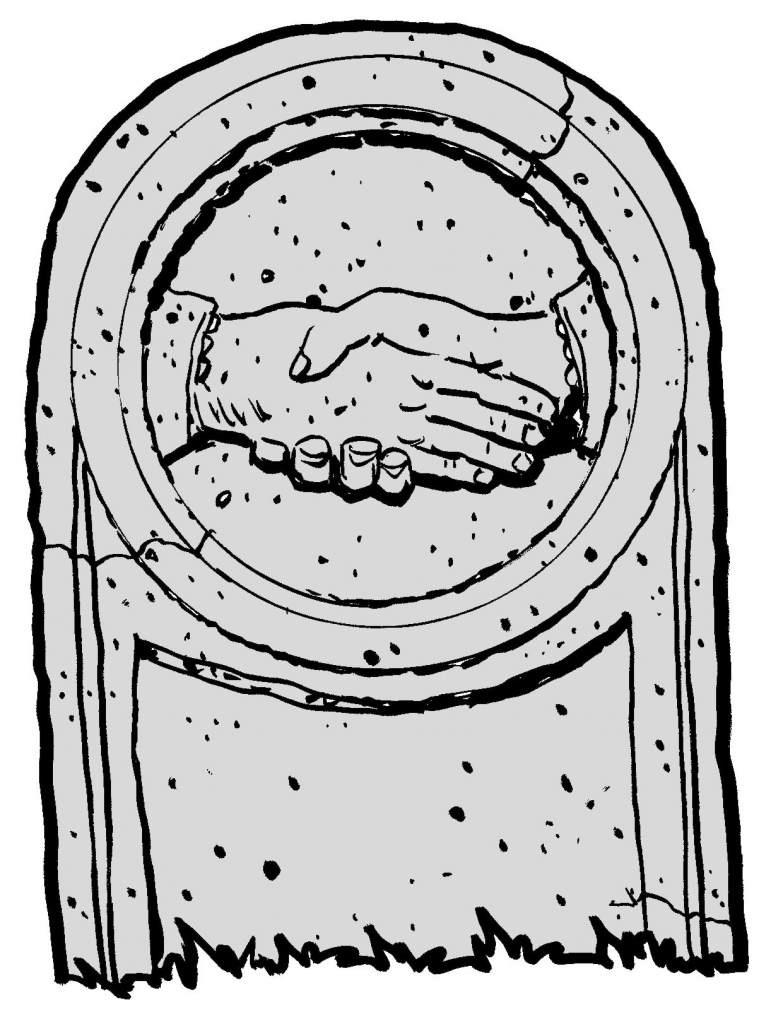 The final nail in the coffin for Puritan gravestones was the epitaph. Carvings would read “Here lies the body of” to clarify that the entire mortal corpse of the deceased was in the ground, but the soul was ready to be received—through reward or damnation—into its eternal resting place.

After years of wear, it’s now often difficult to distinguish these designs from one another. But we dare you to take a walk through the tombstones and see what engravings you can identify.

Here lies the fear of the unknown.

Previous post The Beauty Of A Corrosion Cast Heart