Getting his hands on Manson's ashes wasn't easy. 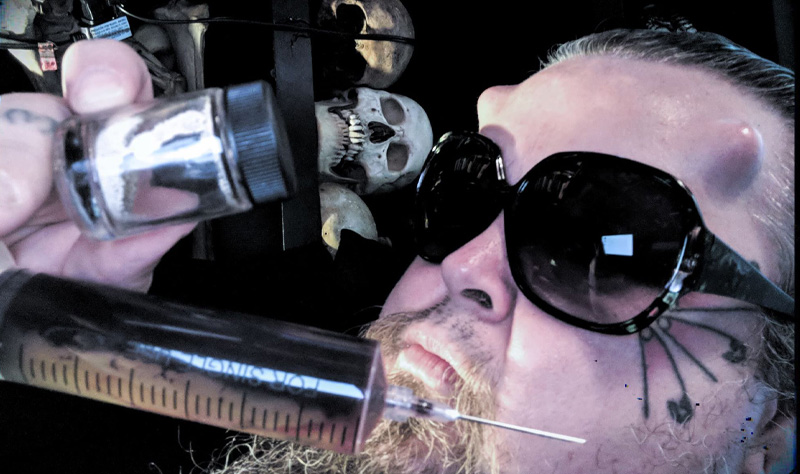 The 48-year-old lives near Buffalo, New York, where he works as a tattooer and specializes in painting…with his own blood. But–Believe It or Not!—that isn’t what’s made him newsworthy.

Ryan has stirred up a huge canvas of controversy recently because he’s claiming to have gotten his hands on some of the cremains of legendary cult leader Charles Manson. He says he is using those cremains to make paintings of Manson, one of which has reportedly already been sold to Travel Channel host Zac Bagans.

So why is Ryan even interested in Manson? What leads him to paint with blood? And what does he say to his critics? 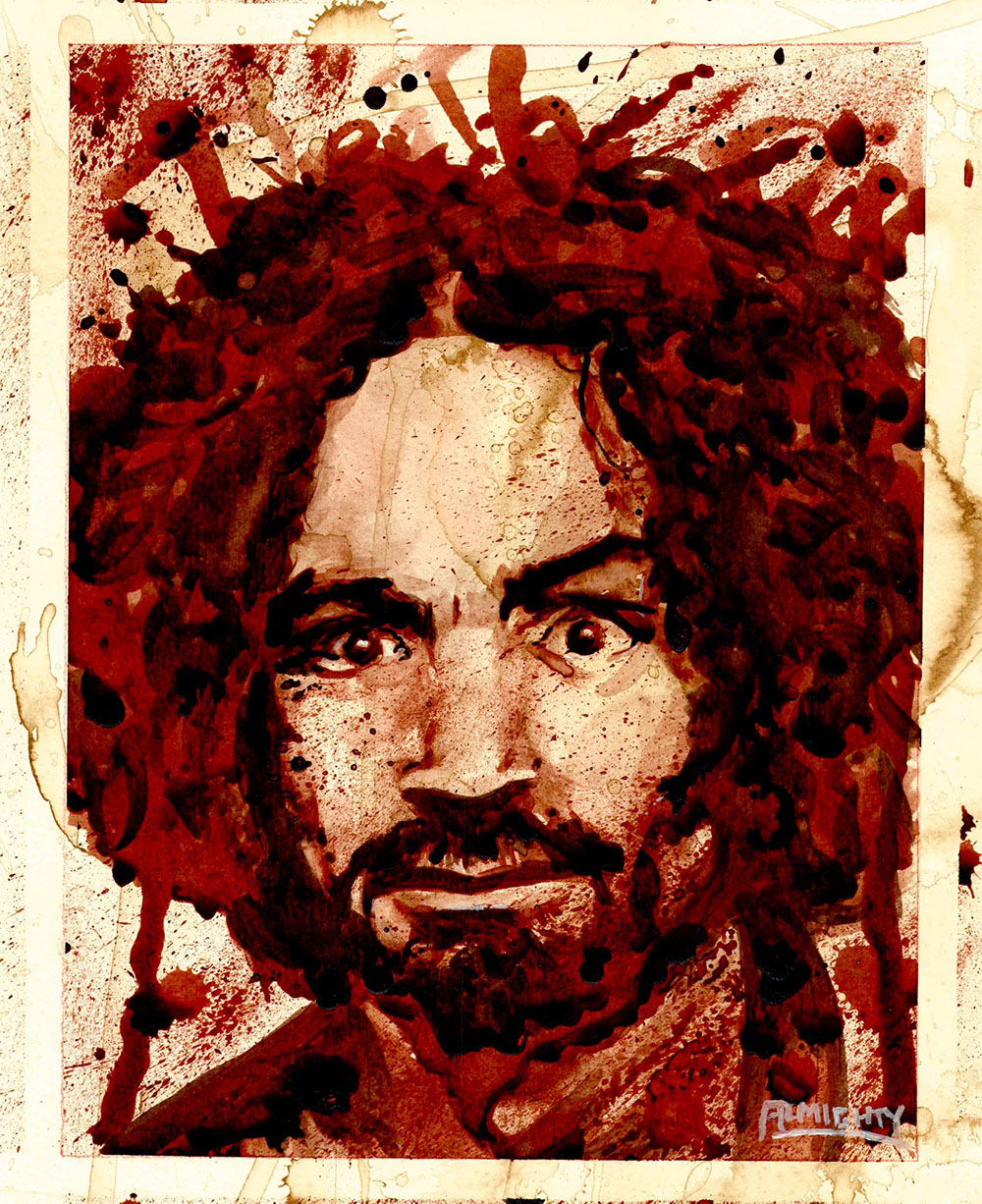 Ripley’s sat down for 10 questions with Ryan Almighty:

1. How did you happen to get some of Manson’s remains?

RYAN: I’m pretty close to the Manson inner circle as I corresponded with Charles in the late 90s, so when Manson passed I approached Jason Freeman (Manson’s grandson) with the idea to do a series of paintings using his blood and possibly Charlie’s ashes for a series of paintings. Jason declined, and I abandoned the idea. As luck would have it, a few weeks later I happened to be watching a Facebook Live feed by a fellow that calls himself “Stoner VanHouten” who is a superfan of Manson’s and gives tours of Spahn Ranch, where the Manson followers lived. I brought up the project that Freeman declined and Tony chimed in. Tony was Jason Freeman’s friend. He announced that he was at the funeral and obtained some of the ashes. We made our deal on Stoner’s live feed. I agreed to give Tony the first painting of the series and the rest is history.

2. How long have you been interested in Manson and what caused this interest?

3. Tell me about painting with human remains—how did you get interested in this and why the appeal? Is it always your own blood?

RYAN: When I started painting in human blood there were very few of us doing it. I had already used blood in performance art and as an artist. Eventually, the two collided. I use others’ blood sometimes, but prefer my own.

4. What’s the plan—as in, what are you working on with his remains?

RYAN: Well the first painting as agreed on, went directly to Tony (the cremains contributor). He’s already sold it to Zac Bagans to display in his Vegas Haunted Museum. My vision is to create a series of four paintings, all portraits of Charles, ranging from a young boy to old man utilizing my blood and his ash, with an engraving of A-T-W-A on the series, which was Manson’s environmental mantra meaning “Air, Trees, Water and Animals.” My vision is to create a future relic for generations to come to gaze upon and know that a piece of Manson is reflecting back. I want people who weren’t around for Manson and only have seen videos and heard storied/legends to experience seeing a small part of Manson’s remains and feel something good or bad, reflect and remember. For the record, money is not my motivation.

5. Are there other works you hope to produce with more of his remains?

RYAN: Yes, If there are more cremains after the series of four, I will do more paintings to share with collectors, fans and anyone fascinated.

6. Do you happen to do this with other famous remains?

RYAN: Of course, I am open to any opportunity to do this with any, unusual/interesting subject.

7. What does the future look like for you? Do you want to push the envelope even further?

RYAN: “Pushing the envelope” comes naturally to me. I’ve always done it and always will.

8. What do you say to those who don’t like the fact that you seem to be honoring someone who was a convicted killer?

RYAN: I would say, first off, Charlie never killed anyone. He was convicted because [Manson prosecutor and Helter Skelter author] Vincent Bugliosi created a boogie man to convict, and ultimately to sell books, and in doing so created an icon. There is a very fine line separating lawyers, cops and criminals. (NOTE: The Charles Manson biography online puts it like this: “Manson was convicted of first-degree murder for directing the deaths of the Tate/LaBianca victims. He was sentenced to death, but this was automatically commuted to life in prison after California’s Supreme Court invalidated all death sentences prior to 1972.”)

9. Further, there are some who seem to not believe your story. What is your response to them?

RYAN: There are always skeptics. I know certain Manson followers consider it real enough to make death threats. I know for a fact Tony was at the funeral and people saw him collect ashes, and I know that he gave me a portion with the agreement of receiving the first painting. Judging by the response and sheer anger and hatred aimed at him by Manson’s friends that attended the funeral, I have no doubts. 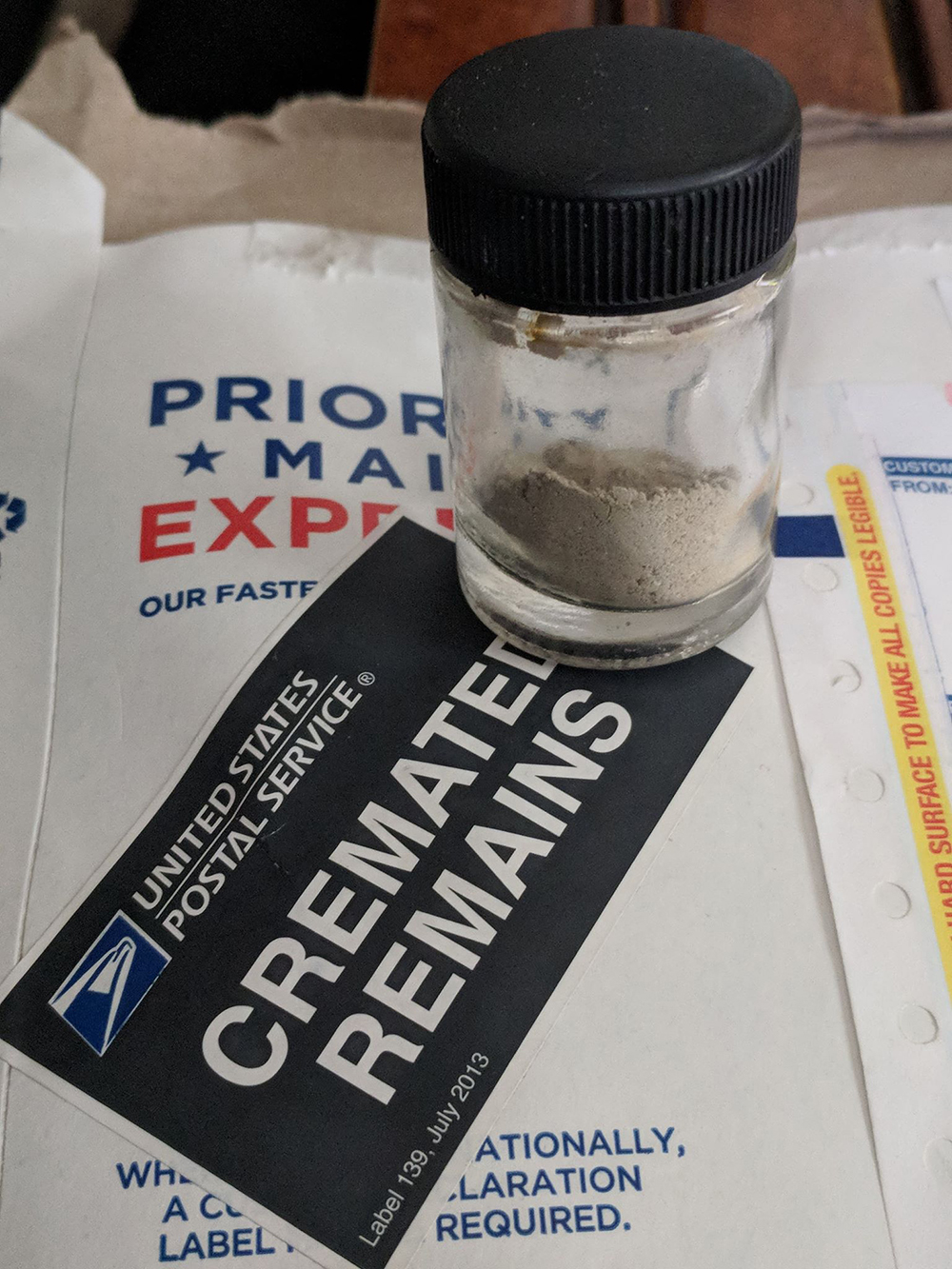 10. Lastly, do you hope to sell this piece when it’s finished? How long will it take and what will the price be?

RYAN: The first piece has been sold by the cremains contributor. The next four are being done as memorial/tribute pieces for my old friend Charlie. If there are more, it remains to be seen. I do know that Charlie loved to make a profit, and can’t help but think he would find all of this hilarious!

Next post Can Your Hair Play Guitar And Take Selfies? This Artist's Sculpted Scalp Can!