An inscription above the chapel's entrance translates to “We bones are here, waiting for yours.” 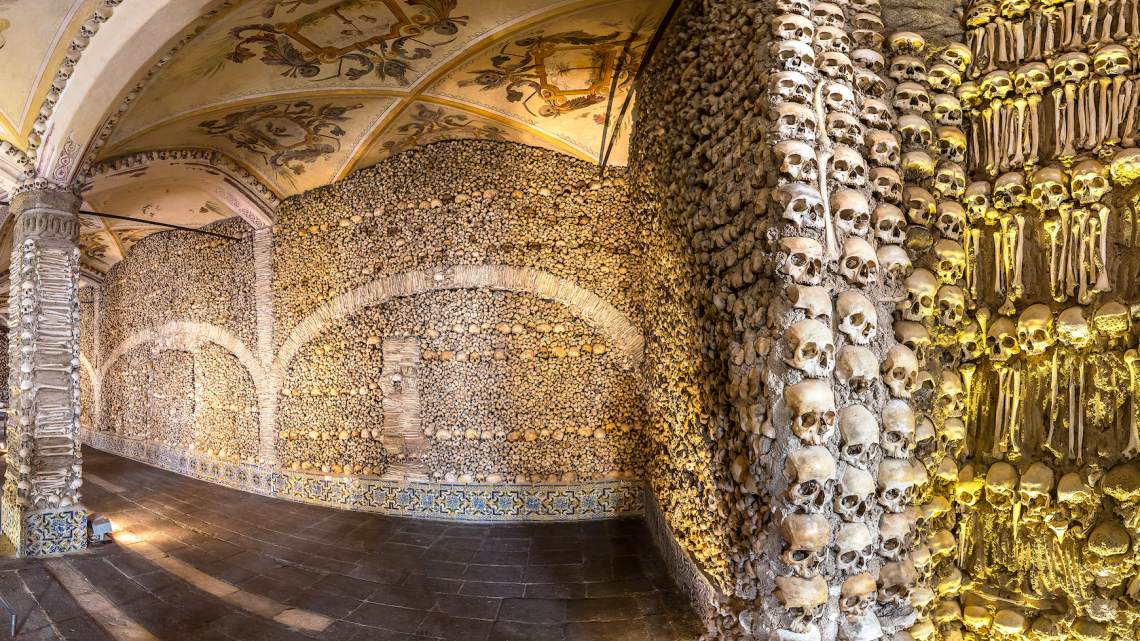 A visit to Évora, Portugal’s Capela dos Ossos (Chapel of Bones) comes with the chilling preface: “Nós ossos que aqui estamos, pelos vossos esperamos,” which translates as “We bones are here, waiting for yours” (via Atlas Obscura). Visitors pass under this dark message of mortality, posted above the chapel door, on their way into a one-of-a-kind tour of the macabre. The Chapel of Bones dates to the 15th and 16th centuries and earned its name by becoming the receptacle for human remains removed from 43 cemeteries in and around the city. 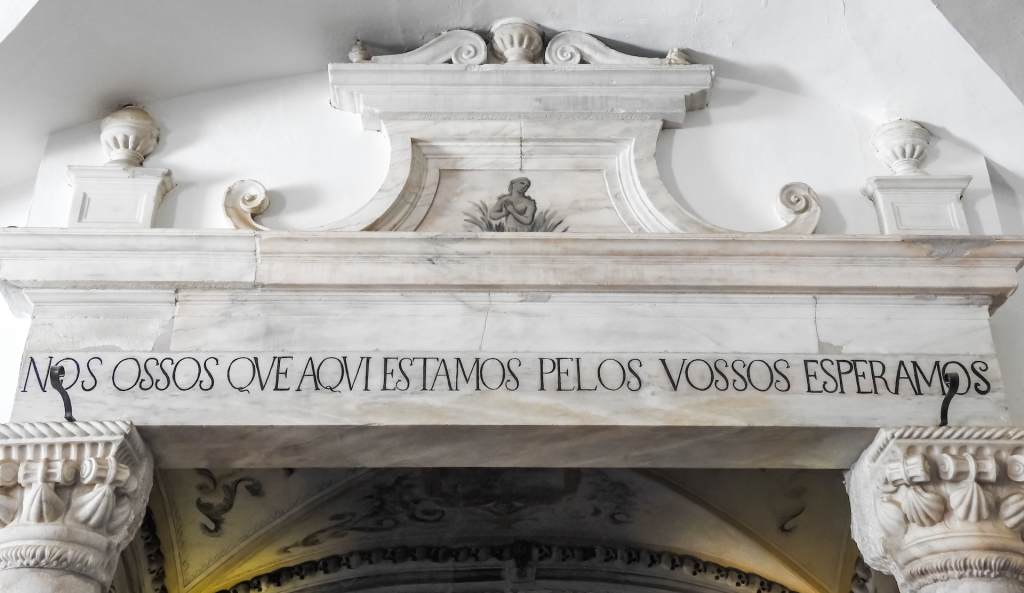 “We bones are here, waiting for yours.” Editorial credit: Cassia Bars Hering / Shutterstock.com

This removal of decaying corpses allowed for the freeing up of valuable land. It also inadvertently led to the creation of one of dark tourism’s number one travel destinations. If you’ve ever wondered what it’s like to visit this death-tinged destination, keep reading for the inside scoop on one of Portugal’s most visited attractions.

The Chapel of Bones’ Gruesome History

After the removal of remains from 43 different local cemeteries, monks serving in the city of Évora had their hands full… of dead bodies. But, of course, re-interring the bodies didn’t solve the problem of land use, and there was also the issue of having removed souls from holy ground. The last thing the monks wanted to do was condemn those once resting peacefully to damnation, which meant thinking outside the box. So, they decided to put the retrieved bodies on display in a church. Problem solved. 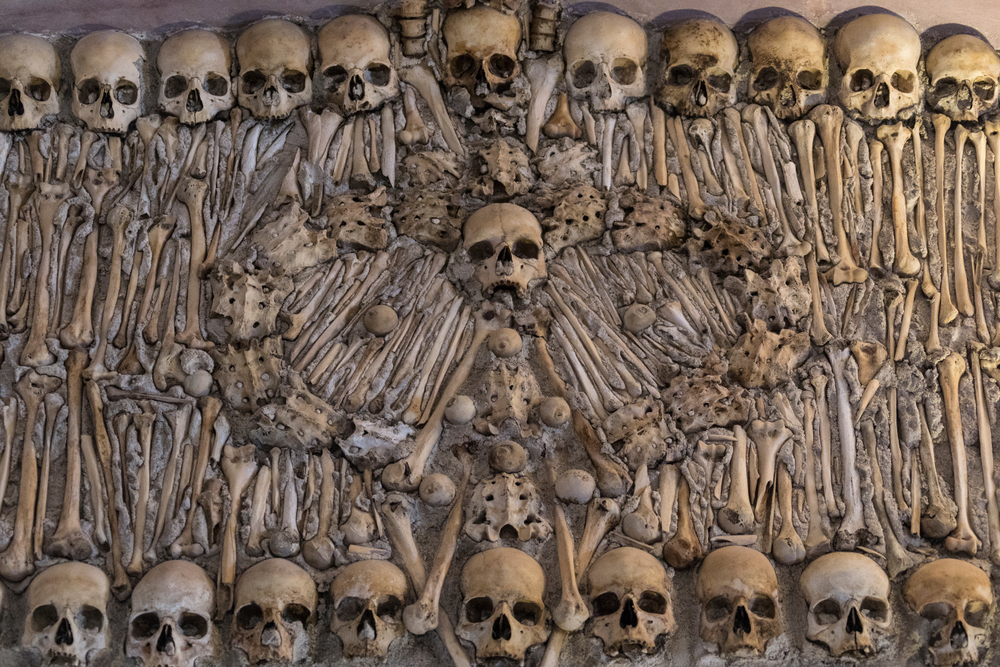 Clearly, 16th-century people operated a little differently than we do today. Instead of concerning themselves with the public health issues associated with filling a building with rotted remains, the monks patted themselves on the back for their ingenuity.

They also reasoned that the Chapel of Bones could offer pilgrims a valuable place for meditation on the transience of the human experience. Surrounded by the inescapable presence of death, it represented a potent proposition that soon drew pilgrims from across Europe.

Ever since the Italian Renaissance exploded onto the scene in Florence in the 15th century — spearheaded by incredible artists like Leonardo Da Vinci and Michelangelo — Italy represented a hearth of European culture. And this proved no less true when it came to influences for Portugal’s Chapel of Bones. The monks who designed the bony displays sought inspiration from the San Bernardino alla Ossa in Milan, and in the process, they created a decadent design to death.

The Chapel comprises a small part of the larger Igreja de Sao Francisco, an otherwise bone-free church complex. Unlike the rest of the site, the Chapel of Bones boasts 5,000 bodies lining its walls, arranged in elaborate patterns. Of course, some of the individual corpses stand out more than others.

These include the desiccated bodies of two people hanging on the Chapel’s wall near the cross. The diminutive size of one of the bodies betrays a small child. Once upon a time, people believed the bodies were those of a father and son, but recent genetic testing has revealed them as a woman who likely died of a tooth infection and a two- to three-year-old girl, per Évora Portugal Tourism. 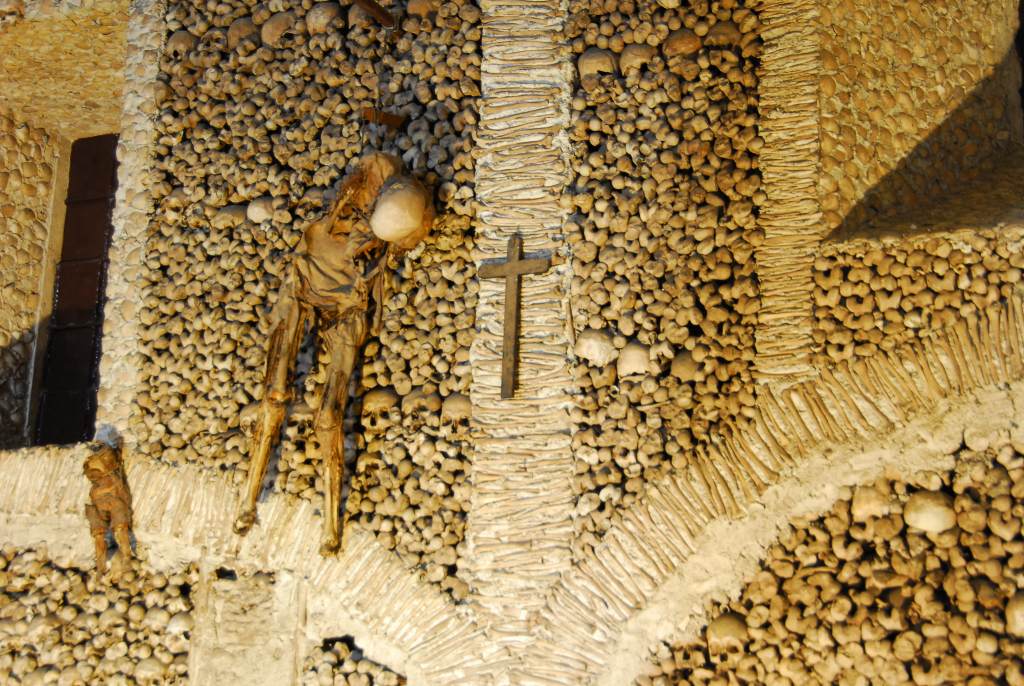 Leaving on a Light Note

The theme of death in this joint can get a little heavy. Perhaps that’s why the monks who created the Chapel of Bones peppered the experience with thoughtful verses and quotes. These include a poem written by Father Antonio da Ascencao and translated by the Reverend Carlos A. Martins, which exhorts pilgrims to spend some time reflecting on a fate they will one day share with the bones.

But it’s not all doom and gloom. At the end of a tour of the Chapel of Bones, guests see two Latin phrases that translate: “The day that I die is better than the day that I was born” and “I die in the light.” Apparently, these were the monks’ idea of a happy ending.

How the Chapel of Bones Compares

Portugal’s Chapel of Bones is far from the only architectural achievement that incorporates skeletons into its construction, as Live Science points out. We’ve already mentioned the San Bernardino alla Ossa in Milan, but there are more. At the 17th-century Capuchin Crypt in Rome, visitors still turn out in droves to see the 3,700 decomposed bodies of Capuchin friars that line its walls. The building features rooms with catchy titles like “The Crypt of the Pelvises.” Another room contains skeletons posed with scales and scythes, symbolizing judgment and death.

And if you’re simply after the most extensive collection of mortal remains in one location, there’s the Sedlec Ossuary in Kutná Hora, Czech Republic. Constructed in 1400, the Ossuary is decorated with the bones of more than 40,000 bodies and claims to contain holy soil from Jesus’ crucifixion location. It showcases elaborate crests crafted from fibulas, tibias, and femurs. But these bony installations came much later, designed by a woodcarver starting in 1870. So, while the Chapel of Bones may not be the largest or most elaborate display in the world, it’s one of the oldest and most impressive, rightly earning its place atop morbid tourism’s travel bucket list.