Why Are These Animals Pink? A Process Called Diaphonization

Once a specimen is rendered transparent, dyes rush to their bones and cartilage. 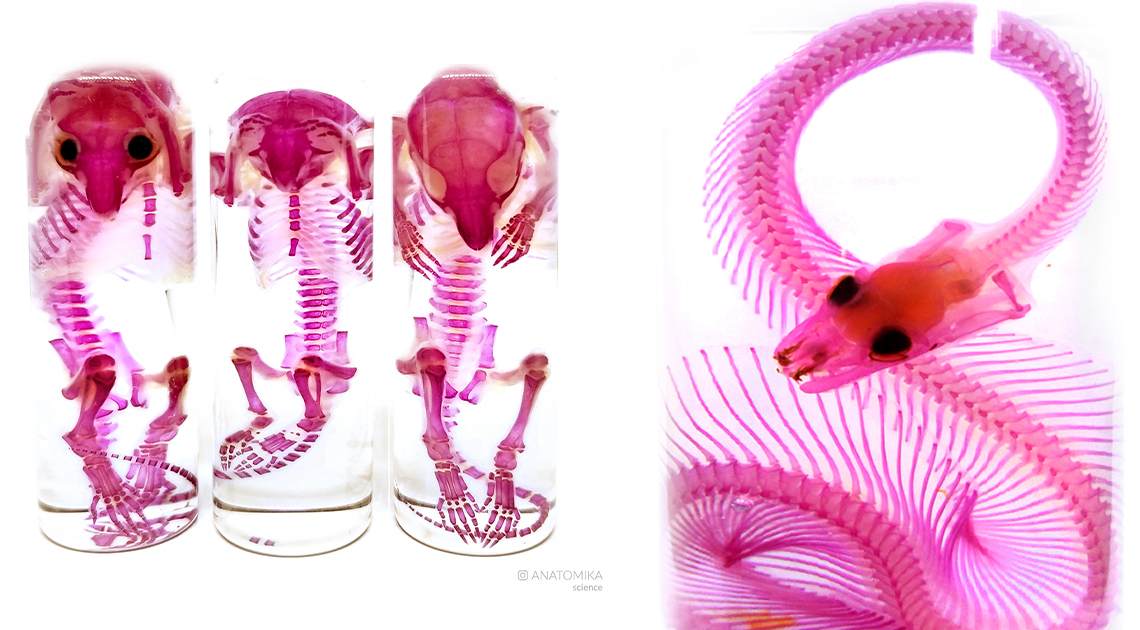 A dead snake curled in a circle peers out from a clear glass container as viewers peer back inside. They can see through the glass and the clear solution, and also through its skin to its neat rows of vertebrae and ribs. The bones and cartilage show intimate details of the snake’s anatomy, in the exact same position in the body as they were in life. The only differences are that the snake is dead, the skin is clear, and the bones and cartilage are dayglo pink and blue. 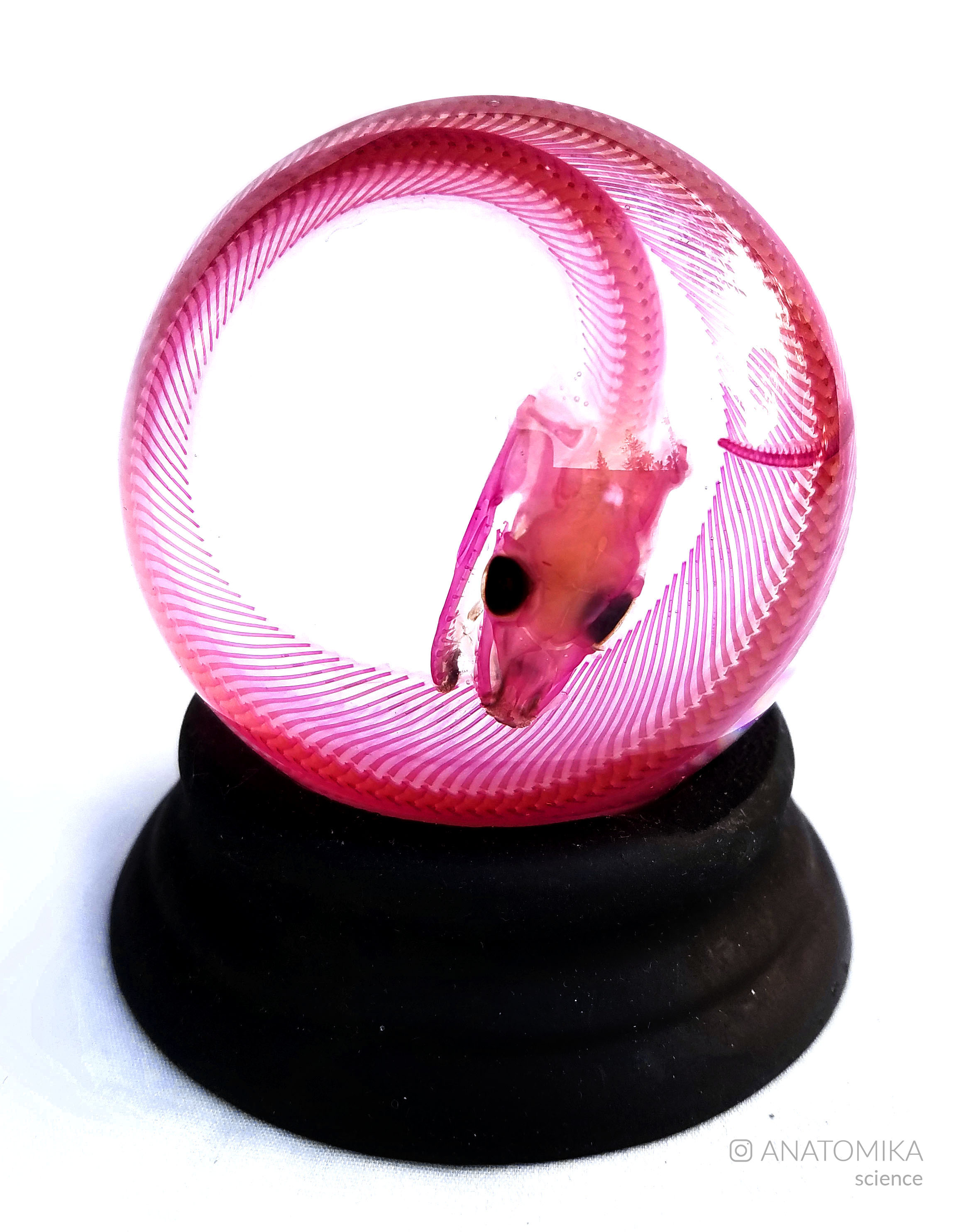 People who prepare animal specimens for museums and schools—as well as for personal collections—can make snakes, frogs, mice, and other small animals into scientific works of art called “diaphonized specimens.” This technique, also known as “clearing and staining,” helps people understand the internal anatomy of an animal in a unique way.

The process is complicated, involves somewhat dangerous chemicals, and takes a lot of training to perfect. Before trying it at home, curious preparators-to-be should start by volunteering at a local museum alongside staff familiar with diaphonization. In one step of the lengthy process, a preparator must soak a dead animal in a chemical called trypsin, which destroys a color-creating protein called casein. No casein, no color. After this part of the process, only a transparent version of the original animal remains. 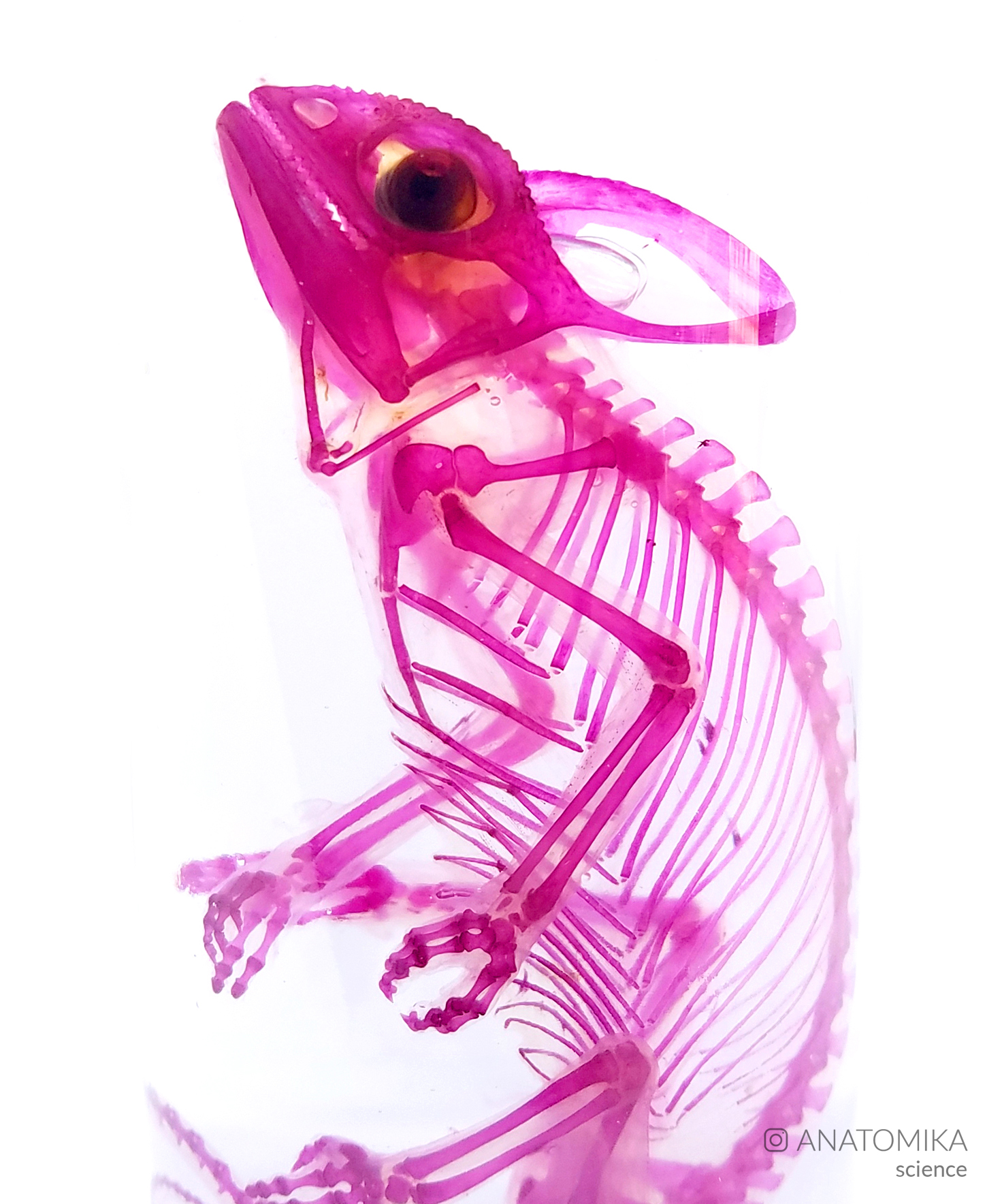 Then, the preparator colors the specimen with types of dye that are attracted to certain substances in the body. “One has a strong affinity towards collagen, another seeks cartilage,” explains Helen Kairo, an anatomical specimen preparator. “They’re kind of like heat-seeking missiles, but they’re tissue-seeking dyes.”

As a result, depending on what dyes are used, collagen-rich bones can turn red or pink, and the cartilage left can turn blue. The result is a colorful, mystical-looking specimen that is both artistic and educational.

Kairo’s job is to prepare animal remains, including diaphonized ones, for educational purposes. She consults with museums and schools to prepare and repair materials. She also educates the public by posting on various social media platforms like Instagram. Currently, Kairo is working on an anthology about the amazing things you can learn from studying animal anatomy. 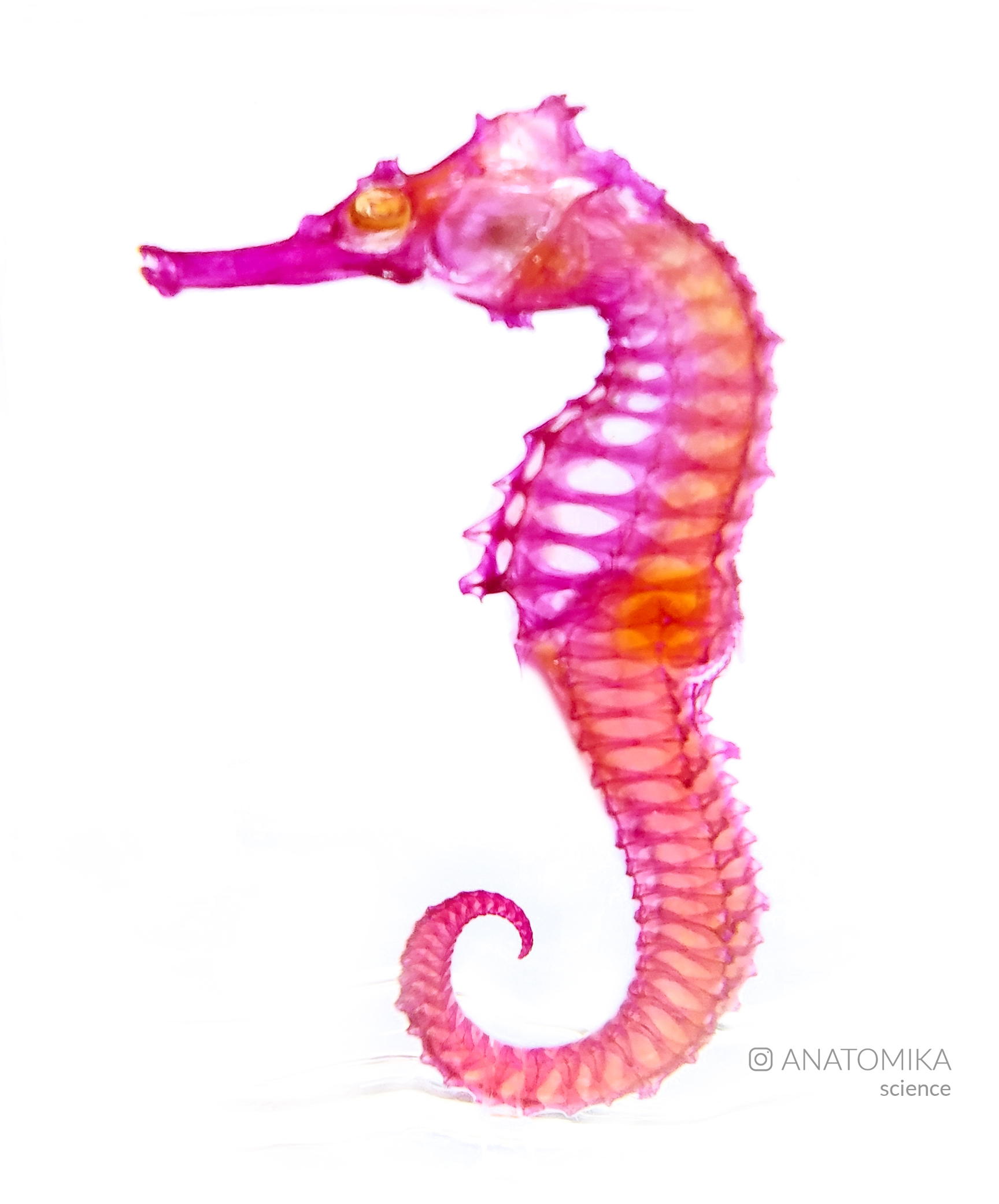 Diaphonized specimens, Kairo explains, are especially useful for certain types of animals that don’t turn out well when prepared other ways. Some of them have bones that are too small and fragile to clean and be made into stand-alone skeletons. Animals without hair and feathers are difficult to make into traditional taxidermy.

Some animals are too big for diaphonization—like adult humans. It would simply take too much time and too many chemicals to process such a big creature. However, some have diaphonized human fetuses to study their development.

Computerized imaging can be useful for these types of animals, and it is more popular these days than clearing and staining for educational institutions. Diaphonization is now something of a lost art, but at least their strange and colorful beauty makes them popular for anatomy enthusiasts to collect from Etsy.

Next post The Great Tarantula Migration Begins In Colorado

Previous post Earth's Largest Mirror Can Be Seen From Space