Feet Keep Washing Ashore In Canada, Sneaker Tech May Be The Culprit

Over 13 feet have washed up in the past decade. 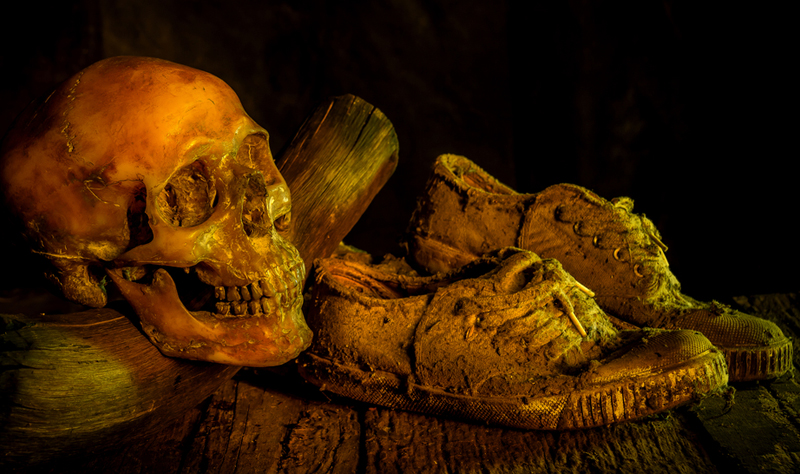 Ocean tides have deposited 14 human feet on the shoreline of a Canadian province over the past decade, and the deceased’s preference for activewear may be the cause of the unusual phenomenon.

Beginning in 2007, 13 feet clad in sneakers have washed ashore in British Columbia. A man walking on the beach on Gabriola Island on the Strait of Georgia discovered the 14th foot on May 6, 2018. The appendage was attached to a hiking boot and was stuck in a logjam, reported the Royal Canadian Mounted Police. 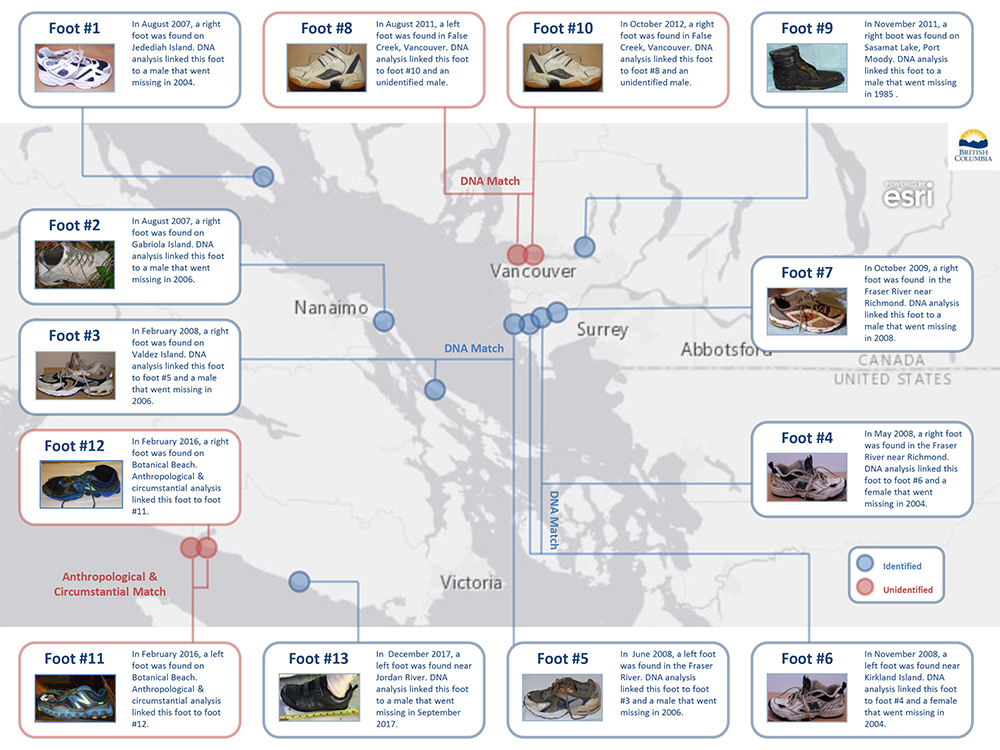 Missing feet locations from the BC Coroner’s Office.

Advances in sneaker technology may be the reason why so many detached feet are making their way to Canada’s westernmost province. Barb McLintock of the B.C. coroner’s office noted in 2016 that new styles of sneakers often contain lightweight foam that “eventually allows them to be light enough to float and to wash up on shore.” Because the sneakers are so durable, they protect the feet from decomposing.

Many athletic shoes contain mesh, which makes them breathable but also more buoyant than footwear made out of other materials (i.e., leather). Synthetics also reduce the weight of the sneakers. New brands feature cushioning that makes the wearer feel as though he or she is walking on air. Adidas Boost technology, for example, includes foam cushioning that does not break down very easily.

It’s unclear where the detached feet are coming from, but theories have ranged widely from natural disasters to airplane and ship accidents. Some have even speculated the feet are from victims of serial killers, the mob, or even aliens.

However, authorities have assured the public that no foul play is suspected in any of the cases because there have been no signs of trauma. The individuals either died accidentally, possibly from storms near the coast or took their own lives. Drownings aren’t uncommon near oceans or lakes, and occasionally the bodies of people who die of natural causes near a shoreline wind up in the ocean. 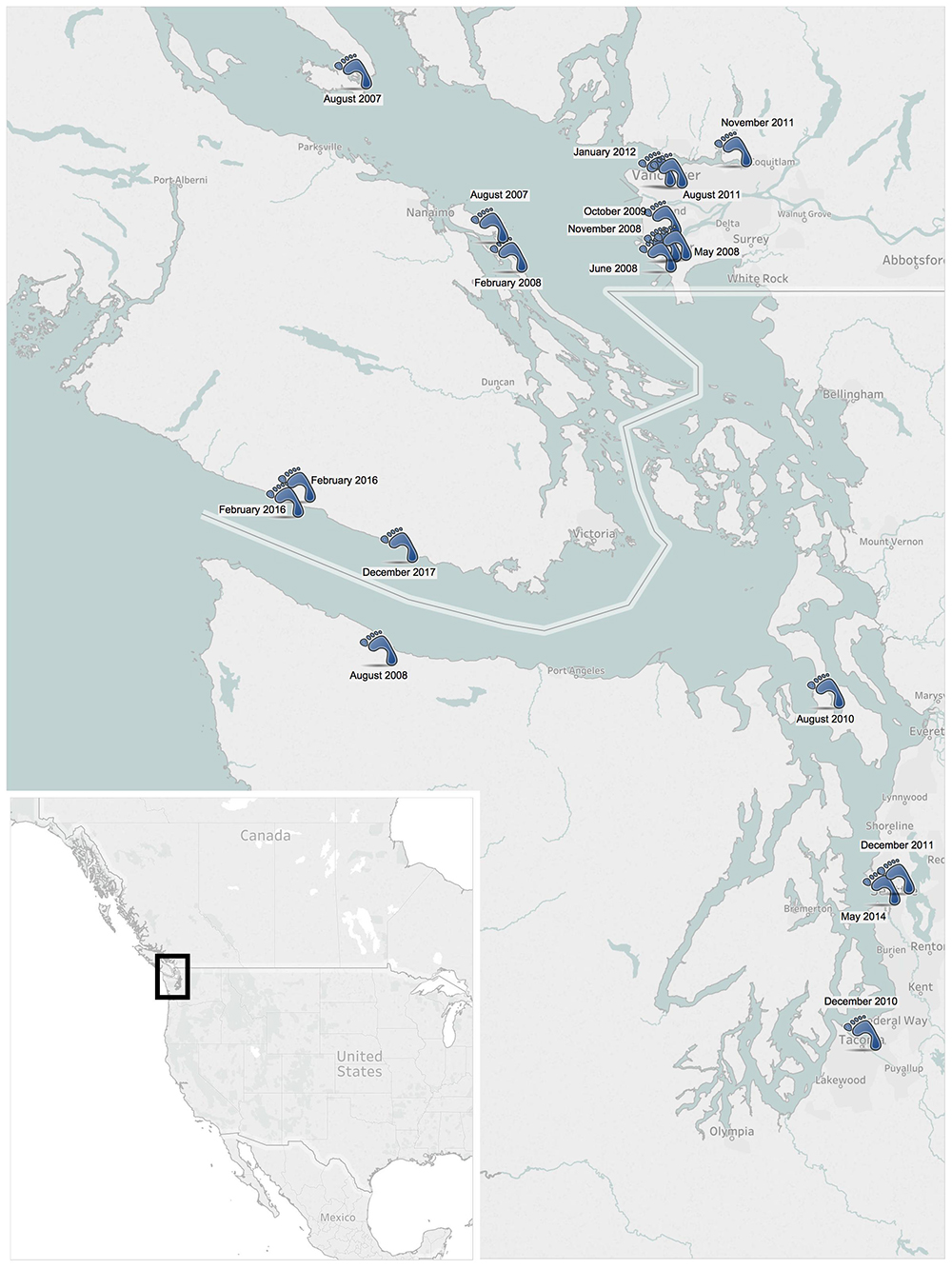 During decomposition, the feet naturally disarticulate from the bodies, a process that happens quicker in water than on land. The deceased ones’ sneakers protect the appendages, preventing sea creatures from gobbling them up.

Over the years, some people have tried to trick authorities by placing chicken bones, raw meat, and dog foot skeletons in sneakers and leaving them on the beach for people to find.

The 13th foot appeared in December 2017 on the southern coast of Vancouver Island. It belonged to an elderly man from Washington state who had gone missing and was later found dead. 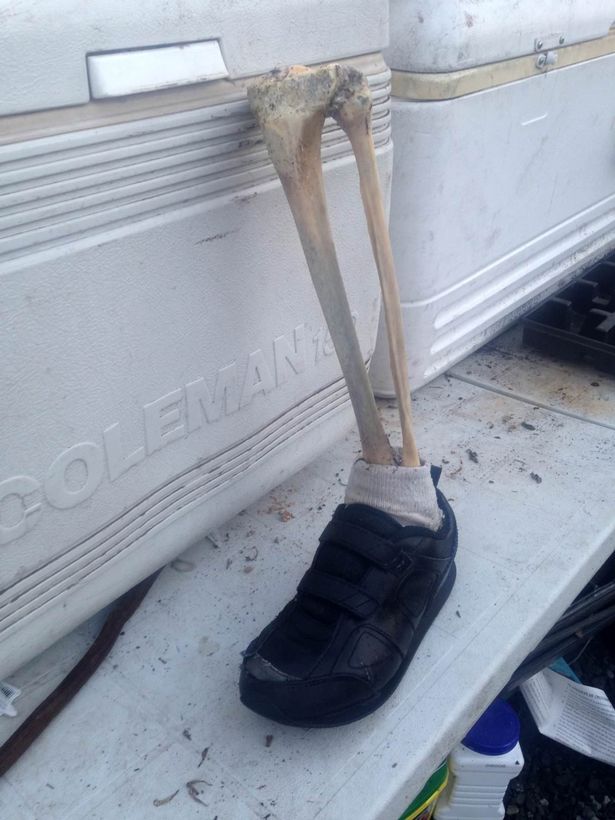 B.C. is a magnet for detached feet because of tide and current patterns. Its shoreline is part of the Salish Sea, a body of water that includes the Puget Sound and Strait of Georgia. Some items that float in the ocean are pushed by the wind, which in the Salish sea moves west to east. Feet have also washed up in Washington state.

Leg-In-Boot Square in Vancouver, B.C., was reportedly named after an incident in 1887 in which a boot with half a human leg attached to it washed up on the shores of False Creek.

Authorities have thus far identified eight of the detached feet, two of which were pairs. The remaining single feet are male.  The DNA from the feet can be difficult to analyze depending on the amount of time the appendages have spent decaying in salt water.

Water temperature plays a big role in the rate of decomposition. Cold water promotes the growth of a waxy, soapy substance called adipocere, which partially preserves a body. In waters below 7°C, it’s not uncommon for bodies to remain almost completely unblemished for several weeks. Eventually, the skin will absorb water and peel away from the body.

In tropical water, a body will float to the surface within days, and sea creatures and birds will dismember it within a week or two.

Next post Up Close With A Vampire Killing Kit