Join the Record Run: Raise Millions of Pennies for Cancer

Two students and their team at the University of Texas are about to break a record for “Pennies Collected” with more than 6,600 pounds of pennies! 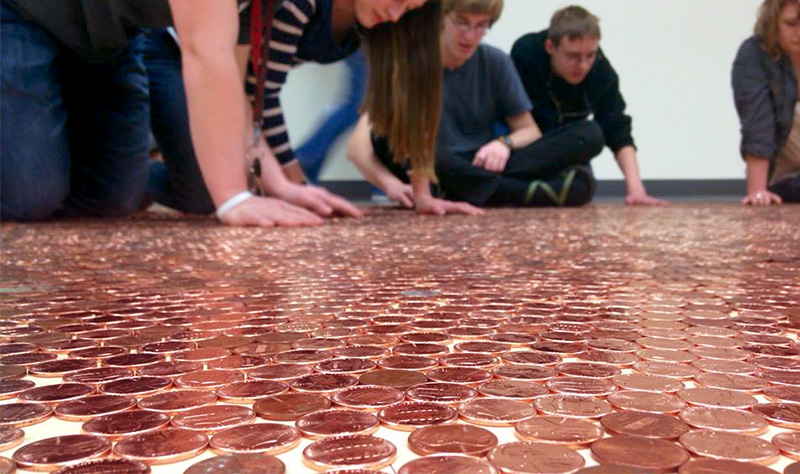 Two freshmen at the University of Texas at Austin along with their team are about to break a world record for the title “Pennies Collected” with more than 6,600 pounds (3 million grams) of pennies, and it’s going to be one for the books!

Freshman founder, Devika Palaniswamy, of the non-profit organization Raise4aCause is on track with her team to host the first successful Record Run- an annual 5k dedicated to breaking world records for charity.

This year, they have enlisted the help of Cambria Sawyer to break the “pennies collected” world record. Cambria created the Penny Drop Project, an event that schools have used to cover classroom floors with pennies as a fundraiser.

The 826.73 pounds (375,000 grams) of pennies, which had been provided by Wells Fargo Bank in fifty $25 boxes, were loaded into a truck bed with a wheelbarrow and spread out across the classroom floor by a team of 25 students at Dripping Springs High School.

OVER ONE MILLION PENNIES which will then be donated to Livestrong

Now Devika and Cambria are combining their efforts to host the biggest Penny Drop Project yet and break a world record to help fund the cancer survivor support programs at the Livestrong Foundation.

The center of the 5K track will feature their new collection of OVER ONE MILLION PENNIES which will then be donated to Livestrong. Participants in the run are encouraged to bring their own spare change to add to the collection and will have the opportunity to be contributors toward the world record!

Runners, walkers, and families are welcome.
Be a part of the world record and register at http://www.raise4acause.org/registration/ before January 31st to receive a $5 coupon on your entry fee.

Can’t make it in person? Don’t sweat it! They’ve got a Ghost Runner option available so that you can still support the cause and have bragging rights about breaking a world record forevermore.

In The Next Ripley’s Book

We’ll have the giant final collage of pennies in the next book (the title is still being kept secret!) as well as how much the Penny Run Drop raises. Be there and you might be in our next edition of strange!