Raccoons are supposedly full of meat less fatty than that of the more-commonly-consumed opossum.

The holiday season is upon us, and there’s no better way to spend it than with family, friends, and of course, our pets! If there’s one thing we all have in common, it’s the love for our four-legged, two-legged, tailed, and scaled family members. And, Believe It or Not!, the White House residents aren’t much different when it comes to celebrating the holidays with their non-human inhabitants. From the Reagans to the Kennedys, let’s gobble up some of the most bizarre animal pardons to hit the Thanksgiving table.

The annual practice of pardoning a turkey at Thanksgiving has become quite a quirky tradition at the White House, but how did it get started and why? Back in the 1870s, poultry dealer Horace Vose began supplying well-fed turkeys to the White House, not as pets, but as the main course on the family’s Thanksgiving Day menu. Contrary to what we see today, there hasn’t always been a peace pact between president and poultry.

Unofficially, good ole Honest Abe is said to have started the tradition of keeping the gobbling main dish off the table and onto the family tree. Abe “pardoned” a turkey back in 1863 when his son, Tad, grew particularly fond of the bird, naming their newest companion, Jack. At the request of his child, Abe spared the bird that Thanksgiving and some of his successors seemed to follow his lead.

You may have heard that President Harry Truman was the father of the presidential turkey pardon—but this is, unfortunately, false. Photos from Truman’s administration show the President happily receiving a turkey as a gift from the Poultry and Egg National Board at a public event. But, the archivists at the Harry S. Truman Presidential Library and Museum in Independence, Missouri, have tried to set the record straight. On the museum’s website, it states “The Library’s staff has found no documents, speeches, newspaper clippings, photographs, or other contemporary records in our holdings which refer to Truman pardoning a turkey that he received as a gift in 1947, or at any other time during his Presidency.” 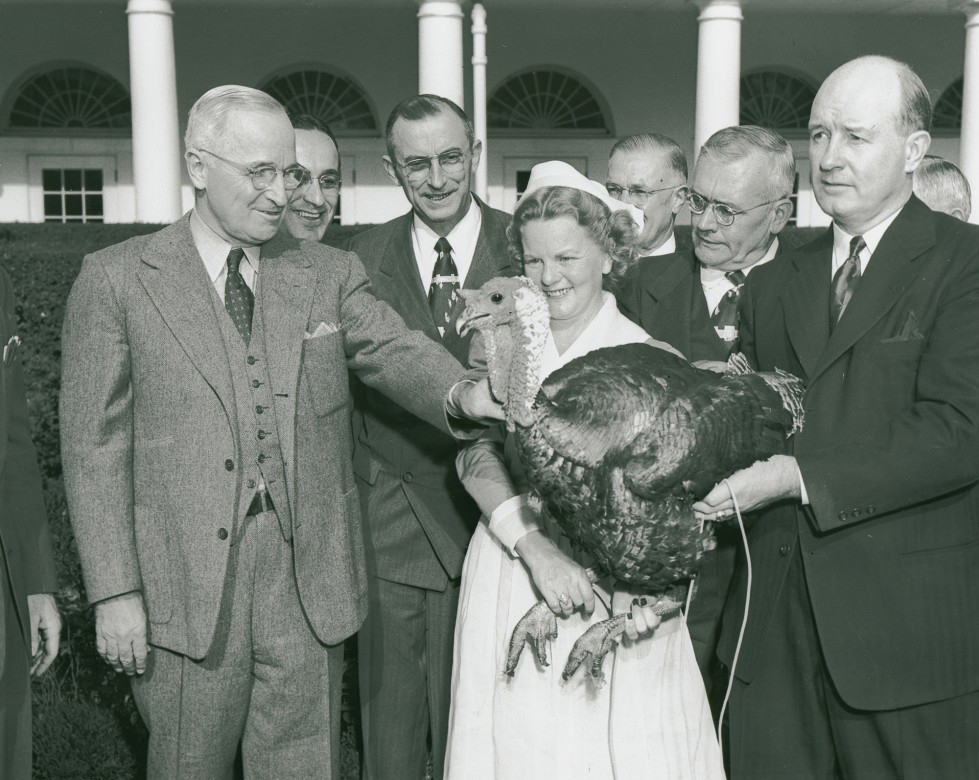 President Harry Truman with a turkey, presented to him by the Poultry and Egg National Board, in the White House Rose Garden on November 16, 1949.
Harry S. Truman Presidential Library/NARA

The photo in question was of Truman receiving a turkey, kicking off an annual tradition of presidents receiving turkeys from the National Turkey Federation. But, let’s not throw Truman under the bus all by himself. Presidents Eisenhower, Ford, Nixon, and Carter were all guilty of “dressing the turkeys for dinner,” as well. And we’re not talking about tuxedos. So, if all of these Presidents chowed down on their table additions, where does the tradition of pardoning a Thanksgiving turkey come from?

Just days before his assassination, President John F. Kennedy casually spared his turkey. When given the bird, it wore a sign reading, “Good Eating Mr. President,” and rather than carve up the fowl, Kennedy said, “Let’s just keep him.” And, in 1987, President Reagan sent his winged-gift, named Charlie, off to a petting zoo. Though again, neither were an official pardon, they are credited in many present-day stories as a root of the tradition. 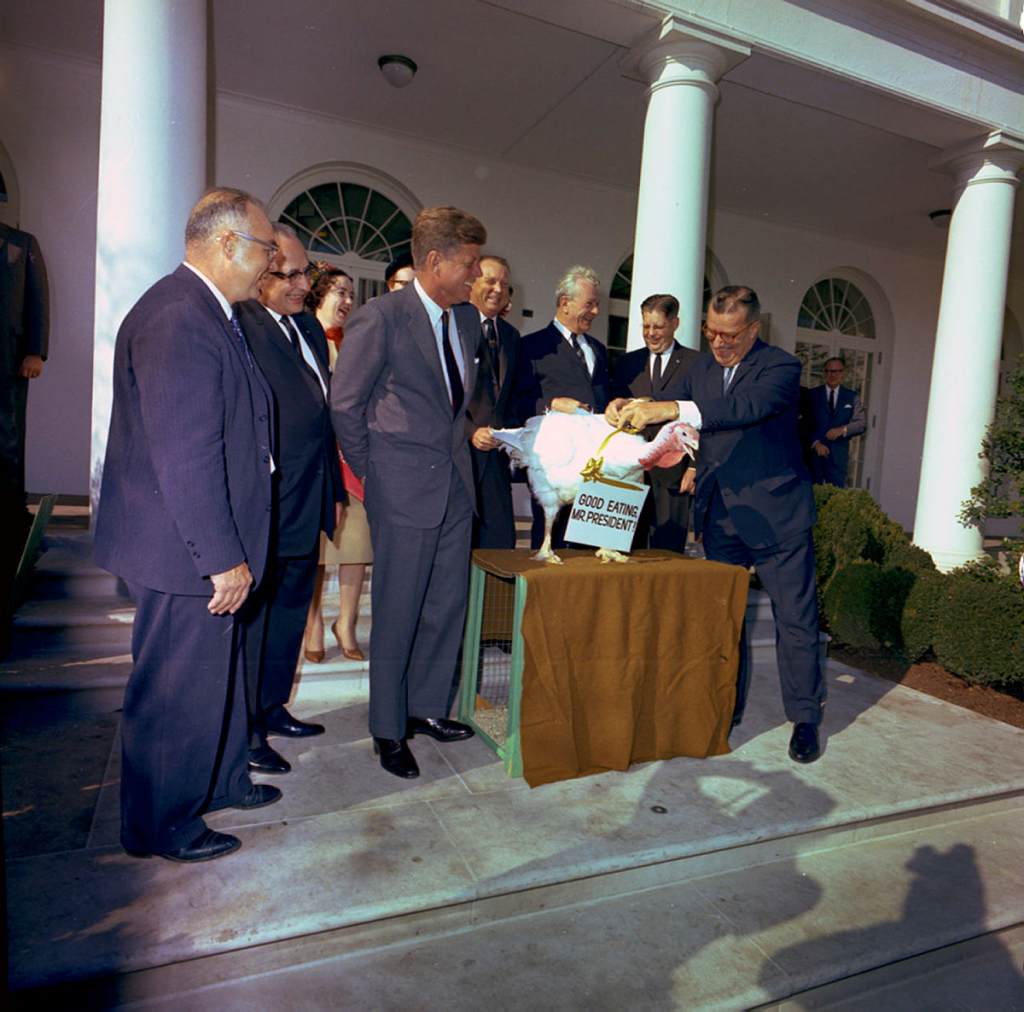 It wasn’t until 1989, the year of George H. W. Bush’s first Thanksgiving that the bird was officially pardoned. There’s no concrete reason why President Bush put pen to paper and started this tradition, but those turkeys had it made. Aptly named May and Flower, the two birds were not only spared by President Bush, but received the royal treatment. Post-ceremony, May and Flower were flown to Disney World where they served as honorary grand marshals in Disney’s Thanksgiving Day Parade. President Bush wished them luck on their journey stating, “May they live the rest of their lives in blissful gobbling.”

With turkeys off the table, it may seem as though the story ends here. But amidst all the gobbling gifts to arrive at the front door of the White House, turkeys weren’t the only animals who needed saving. In late November 1926, a man named Vinnie Joyce from Mississippi sent President Calvin Coolidge a different animal to grace his Thanksgiving table—a raccoon. 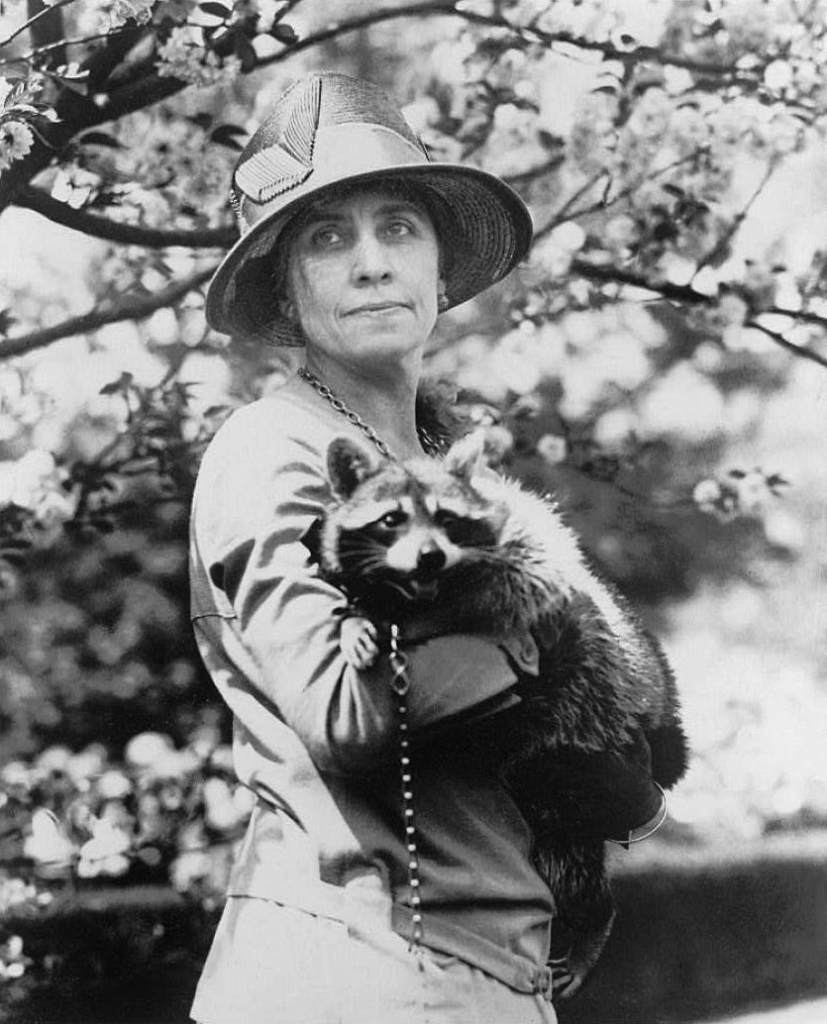 Grace Coolidge and Rebecca the Raccoon

Raccoons are supposedly full of meat less fatty than that of the more commonly consumed opossum. But even so, Coolidge had never tasted raccoon meat—and he wasn’t about to start with a gift from the forests of Mississippi. When asked if the raccoon was edible, the president said it might be for some people, but not for him.

Instead of carving the bandit-eyed critter, President Coolidge and his family decided to adopt the raccoon as a presidential pet. The Coolidge family was no stranger to housing unusual animals; they were also the proud owners of a black-haired bear, an African pygmy hippopotamus, and even a pair of lion cubs. The press called their home the “Pennsylvania Avenue Zoo.”

A Trash Panda in the White House

You would think, alongside lions and bears, a raccoon would be the least of the family’s worries. But according to the White House Staff, Rebecca was a “regular Houdini.” She could wriggle free from harnesses, break out of her cages, and she tore apart just about everything in the house from clothing to furniture—sounds more like the scavenging raccoons we know today.

Eventually, the Coolidge family built Rebecca a wooden house on the White House’s South Lawn, just outside the window of the President’s office. It actually wasn’t until Christmas that year that Rebecca received her name, along with a shiny collar engraved with her title: Rebecca Raccoon of the White House.

So, what happened to this woodland critter, you might ask? Eventually, after some more temper tantrums, outbreaks, and the supposed biting of President Coolidge, Rebecca retired from the press and paparazzi to the White House backyard. Coolidge actually granted her a companion, named Reuben, in 1928 to keep her company. But still, she wasn’t satisfied with her living arrangements and made many attempts to escape. When these fleeing habits became more and more common, the Coolidges decided to donate Rebecca to the National Zoo.

While we can expect to see more turkey pardons at the White House, we wouldn’t count on any of Rebecca’s cousins joining the crew anytime soon. It’s now illegal to keep a raccoon as a pet in the District of Columbia—and with the havoc Rebecca wreaked on the President’s closet, home, and living room, we can see why.

Next post The First Thanksgiving Feast Featured Shellfish, Swan, And No Women