The Man Who Makes The World’s Biggest Monsters

At museums in DC, Indianapolis, New York, and across the world, this artist’s sculptures bring prehistoric creatures back to life.

In the United Northwest neighborhood of Indianapolis, a 70-foot-tall Brachiosaurus rises up on her hind legs. Her front feet are planted on the green glass of Children’s Museum Indianapolis, her head through a groove in the top of the building. This impressive sculpture towers above visitors as a formidable attraction, but also an educational one. 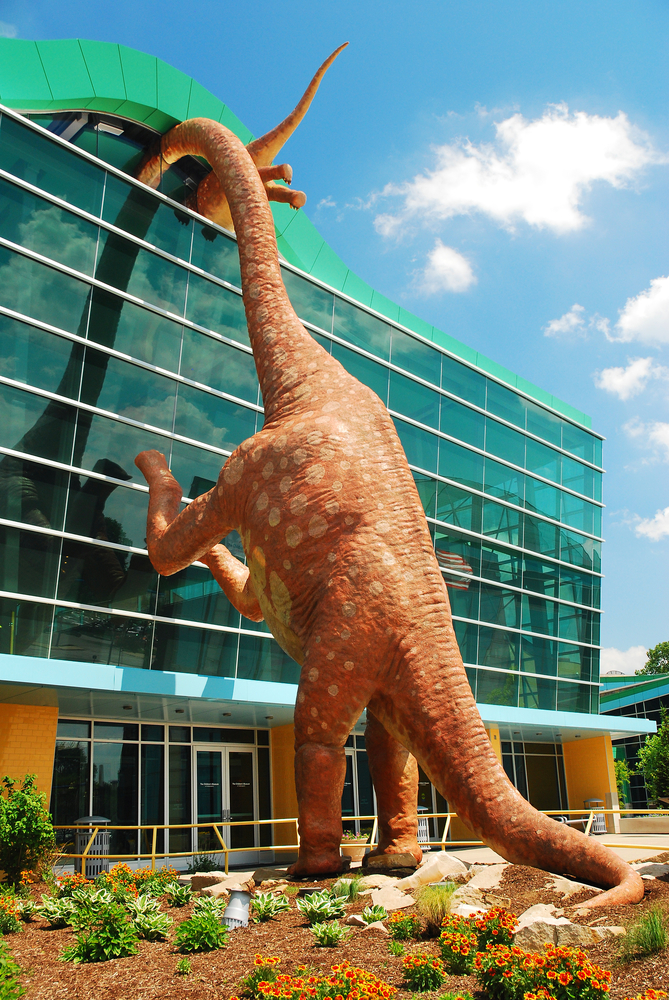 The artist who created the Brachiosaurus, Gary Staab, is known for his realistic constructions of long-gone prehistoric beasts—and for his ability to design them at a breathtaking scale.

“We’ve done some of the largest animals to ever live,” Staab explained of the work done at Staab Studios in Missouri. “We’ve done the largest crocodile, the largest shark, the largest dinosaur at the time, and the largest flying reptile.” That is, respectively, the Sarcosuchus, or super-croc, megalodon, Brachiosaurus, and Quetzalcoatlus, a flying animal as tall as a giraffe.

But before Staab had the opportunity to create scientific monster statues, he wasn’t sure if he wanted to study biology or music.

Then, one day, as a freshman in college, Staab visited the Hasting’s Museum of Natural History. As a lover of both art and animals, the sculptor-to-be was captivated by the concept of making educational displays. He did a directed study at the museum to help them make model animals, then he did an internship at the Smithsonian, another at the British Museum of Natural History in London, and later was on staff at the Denver Museum of Nature and Science. He’s been creating prehistoric beasts for the public to enjoy ever since.

Recently, Staab made headlines for his construction of a life-sized megalodon, hanging menacingly from the ceiling at the Smithsonian Museum of Natural History. The animal, which went extinct 3.6 million years ago, was a relative of today’s mako sharks—but megalodon was bigger than a school bus. Staab’s construction was 52 feet long, 23 feet across the fins, and 34 feet around the belly. 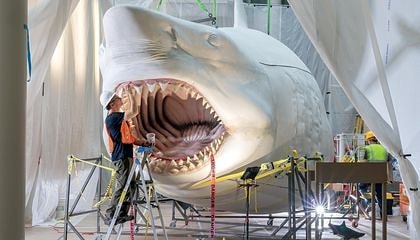 Imagine fitting that through the Smithsonian’s front door.

“A big part of my job is getting really big animals through really small doors,” Staab explained. When his studio was constructing the beast, they also constructed a replica of the Smithsonian’s entry. They had to make the megalodon in 21 pieces, fit them through the doors of their studio, transport them to Washington, D.C., get the pieces inside the museum, and then put them all together, 83 feet in the air.

“Scientists have only the bones [of many prehistoric animals,] so they have to work with folks like myself to create these renditions of animals,” Staab explained. “So that we can get a better idea of what animals looked like in the past.” Staab thinks of the creatures, from thousands to hundreds of millions of years old, as “markers” of their time.

“It gives us a way to frame time,” he continued. “Looking back with these animals is a way to time travel.”

Next post Did Gutenberg Invent The First Printing Press?