Teddy Roosevelt Can Take A Bullet! 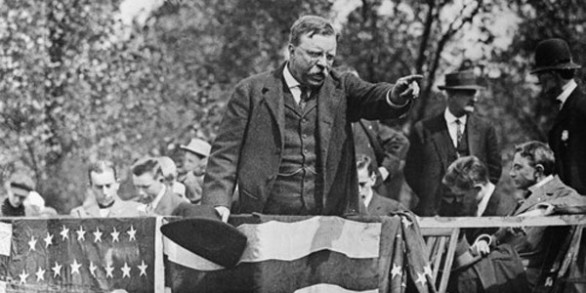 The progressive party candidate, was on his way to give a speech in front of the Gilpatrick Hotel when Schrank pulled the trigger and failed to mortally wound the former President with a .32 caliber bullet. 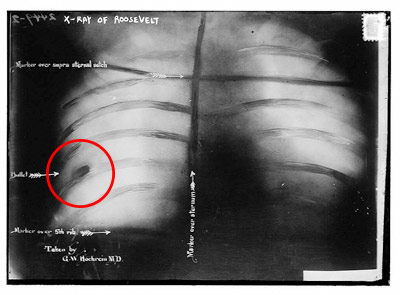 The shot was slowed by a glasses case and a bundle of manuscript in the breast pocket of Roosevelt’s heavy coat – a manuscript containing Roosevelt’s evening speech.

If not for the case for the spectacles of Teddy Roosevelt the name of John F. Schrank might be as well known as that of John Wilkes Booth.

Schrank was immediately detained and reportedly offered as his motive that “any man looking for a third term ought to be shot.”

“… You see, it takes more than one bullet to kill a Bull Moose.”Roosevelt, who suffered only a flesh wound from the attack, went on to deliver his scheduled speech with the bullet still in his body. After a few words, the former “Rough Rider” pulled the torn and bloodstained manuscript from his breast pocket and declared …

He spoke for nearly an hour and then was rushed to the hospital.

Next post Burned at the Stake: A Retrial for a "Witch"