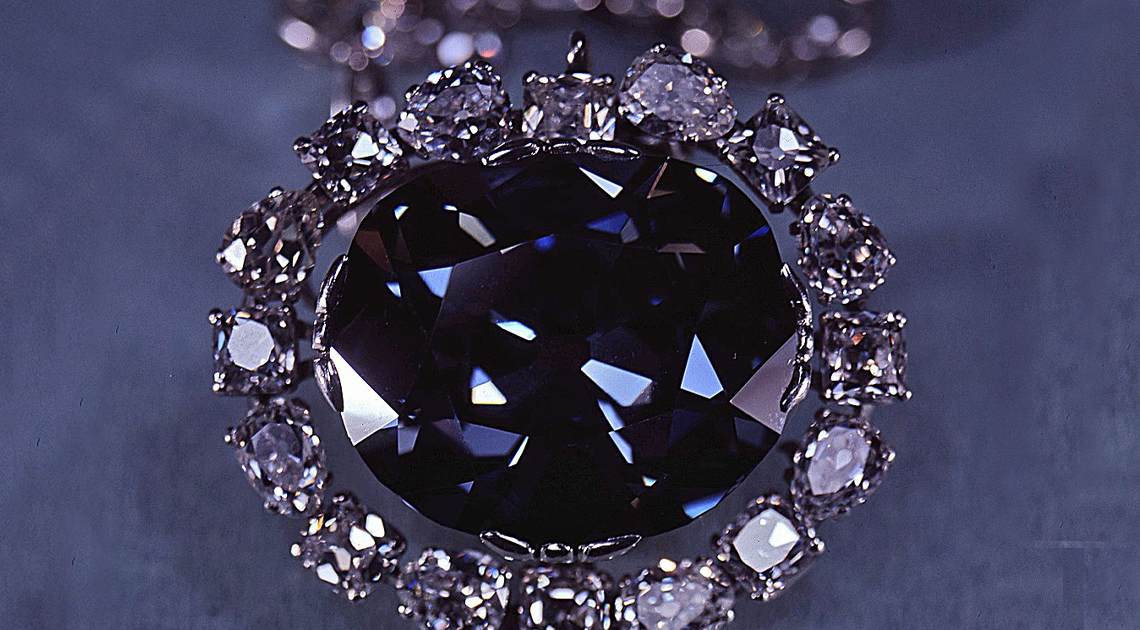 Hotly contested debates still swirl around the movie Titanic (1997). Researchers continue to question what really sank the ship. A documentary in January 2020 argued that a coal fire weakened the hull. And fans as famous as Brad Pitt wonder whether Leo could have fit on the door. (Sorry, Kate, but we think the answer’s an obvious YES!) Of course, one of the show stoppers of the film remains the so-called “Heart of the Ocean.” It took everyone’s breath away in James Cameron’s movie and contributed to its nostalgic ending.

But did you know that a real-life jewel inspired the “Heart of the Ocean”? And unlike the movie’s stunning stone, the actual one, known alternately as the Hope Diamond and Le Bijou du Roi (The King’s Jewel), comes with plenty of bad mojo.

Here’s what we know about the Hope Diamond and those who may have fallen victim to its curse.

The Eye of a Hindu Deity

As tales go, the Hope Diamond legend proves titillating, spine-tingling, and entirely lacking in evidence. Nevertheless, it provides the ultimate cursed-jewel origin story. In 1666, Jean-Baptiste Tavernier stole a 115.16-carat blue diamond eye from a statue of the Hindu goddess Sita. Alternate versions claim he acquired it from a crooked priest.

Devotees of the temple were far from impressed. In retaliation, they placed a curse on whoever possessed the gem, supposedly launching a series of unfortunate events that would impress Lemony Snicket. Named the Tavernier Blue, the diamond was later recut, birthing numerous other jewels, including the infamous Hope Diamond.

Tavernier described the jewel as “violet” (a synonym for blue at the time) and of the highest clarity. A trader and traveler, he returned from his sixth voyage to India with the blue beauty. Some believe Tavernier sourced it from the Kollur mine in the Guntur district of Andhra Pradesh in 1666. These details remain up for debate, however.

Tavernier detailed the blue gem in his travelogue, The Six Voyages of Jean-Baptiste Tavernier (1678), providing detailed illustrations of the cut and quality. In 1668 or 1669, he sold this namesake jewel to King Louis XIV of France for a crazy bargain, 220,000 livres. The stone was valued at twice that amount! Why would Tavernier part with the diamond for so little?

As author Richard W. Wise notes in The French Blue, Tavernier received a patent of nobility in the deal. (Such patents cost between 400,000 and 500,000 livres at the time.) What’s more, doing business with the king came with priceless publicity. And when you consider the state of the economy in 17th century Europe, Tavernier had few clients to choose from.

The Blue Diamond of the Crown of France

Some rumors claim Jean-Baptiste Tavernier died of a raging fever not long after returning from India. To make matters worse, wolves or wild dogs ravaged his corpse. While fantastic supporting evidence for the curse, other accounts say the jeweler lived to the ripe old age of 84. If the jeweler’s bones didn’t become dog treats, you could argue that the stone bestowed him with an abnormally long life.

Of course, the so-called trail of death would continue. After purchasing the Tavernier Blue, Louis XIV hired Jean Pitau to recut the crudely-shaped triangular stone in 1678. Pitau’s work resulted in a 67.125-carat jewel that royal inventories listed as the Blue Diamond of the Crown of France. The king wore the stone set on a cravat pin of gold.

On a special occasion, Nicholas Fouquet, a favorite of the king, wore the diamond. Shortly after, the king accused him of embezzlement, and Fouquet spent the rest of his life in the fortress of Pignerol hanging out with the likes of the Man in the Iron Mask. Of course, Fouquet’s extravagant lifestyle didn’t help his case any. Nonetheless, Fouquet’s downfall would fuel the curse.

As would the deaths of almost every legitimate child Louis XIV sired. The king’s excruciatingly painful and stinky end by gangrene in 1715 also added to the legend. Were child mortality and necrosis common in the 17th and 18th centuries? Absolutely. Nonetheless, the curse of the Hindu god proved a more compelling explanation.

Louis XVI and Marie Antoinette eventually inherited the French Blue. By 1793, their heads rolled, and all but one of their children met grim fates. In the French Revolution’s turbulence, the French Blue disappeared. It eventually re-emerged as a 45.52-carat stone recut to prevent identification.

In 1839, Henry Thomas Hope acquired the diamond, endowing it with his name. Despite the positive title, his heirs also complained of bad luck and sold it to settle gambling debts. After recutting the diamond again, Dutch jeweler Wilhelm Fals’s son, Hendrik, murdered him and stole the diamond. Hendrik later committed suicide. Another owner, Greek merchant Simon Maoncharides drove off a cliff perishing with his wife and son. Did the Hope Diamond cause any of these tragedies? No, but stories like this were about to make someone rich.

In the 20th century, famed jeweler Pierre Cartier owned the diamond and wanted to sell it to American heiress Evelyn Walsh McLean. But she didn’t care much for the stone. So, Cartier pieced together a tragic history for the diamond. It wasn’t very difficult considering the stone’s great age and the fact its human owners all proved mortal in the end.

McLean regularly wore the diamond. Some reports say she had a collar created so her Great Dane could sport it, too. Then, the trouble started. First, her mother-in-law died, and then her nine-year-old son. Soon, her husband left her for another woman before ending up in a mental hospital where he perished. At 25, McLean’s daughter died of a drug overdose, and financial ruin followed close behind. Forced to sell her newspaper, The Washington Post, Evelyn McLean died impoverished. Was this a case of Hindu idol revenge or self-fulfilling prophecy? We’ll let you decide.

Harry Winston, Inc., of New York, purchased the Hope Diamond along with McLean’s entire estate jewelry collection in 1949. For ten years, the stone toured the world with other precious gems known as The Court of Jewels exhibition. Funds from the show went to charity.

Because of the jewel’s rare and unparalleled beauty, Winston decided to donate it to the Smithsonian Institute. He mailed the gem first-class for $145 in insurance and $2.44 in stamps. The balance for the insurance fee was a whopping $1 million. James Todd, the mailman who delivered the package, would later add to the jewel’s infamy. After the delivery, he claimed his wife died, his leg got crushed, his dog was strangled, and his house burned to the ground. 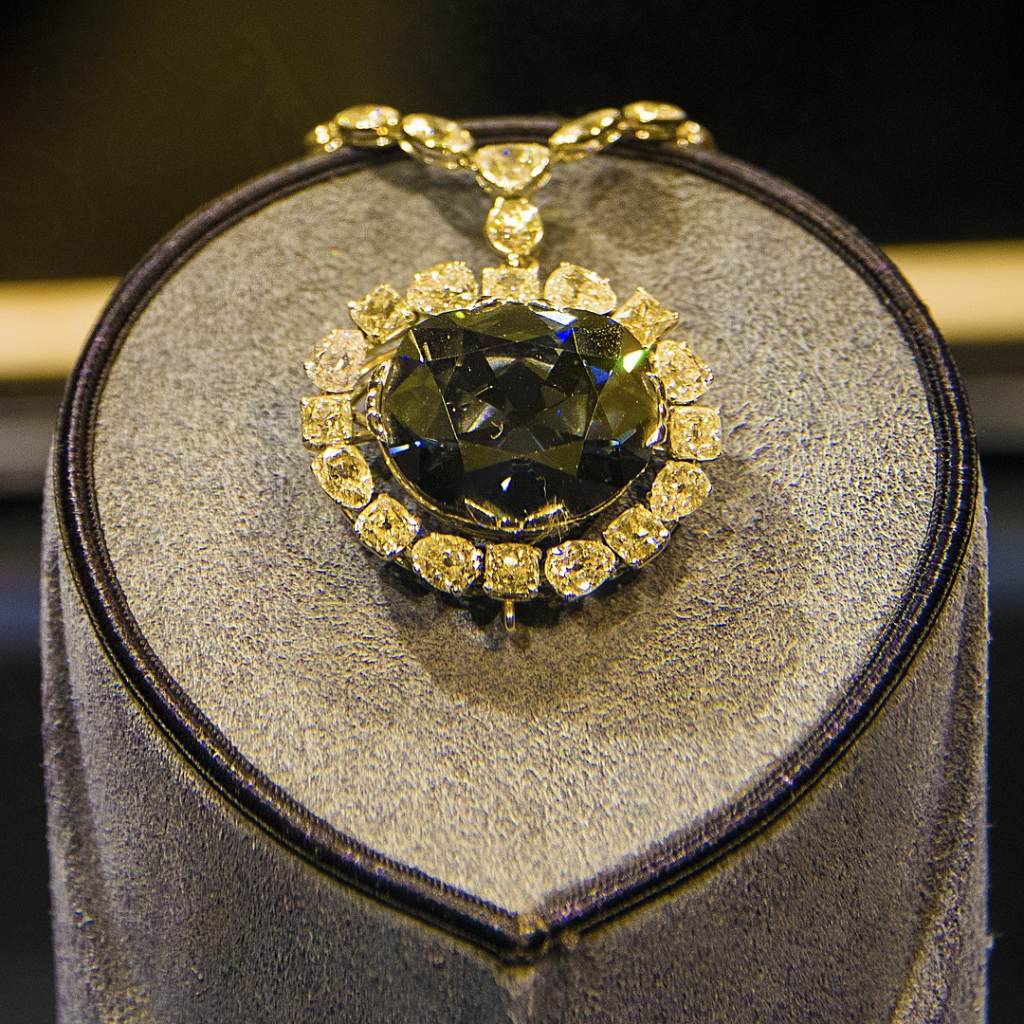 Not surprisingly, the Smithsonian has become the Hope Diamond’s final resting place. One of the most famous jewels in the world, people remain intrigued by its lethal reputation and are satisfied to keep this “blood diamond” at a distance. That said, Cartier profited from the curse when he sold it to McLean, and the diamond’s terrible reputation continues to draw crowds to the Smithsonian.