Why Do Witches Ride Brooms?

The history of witches and broomsticks goes back centuries! 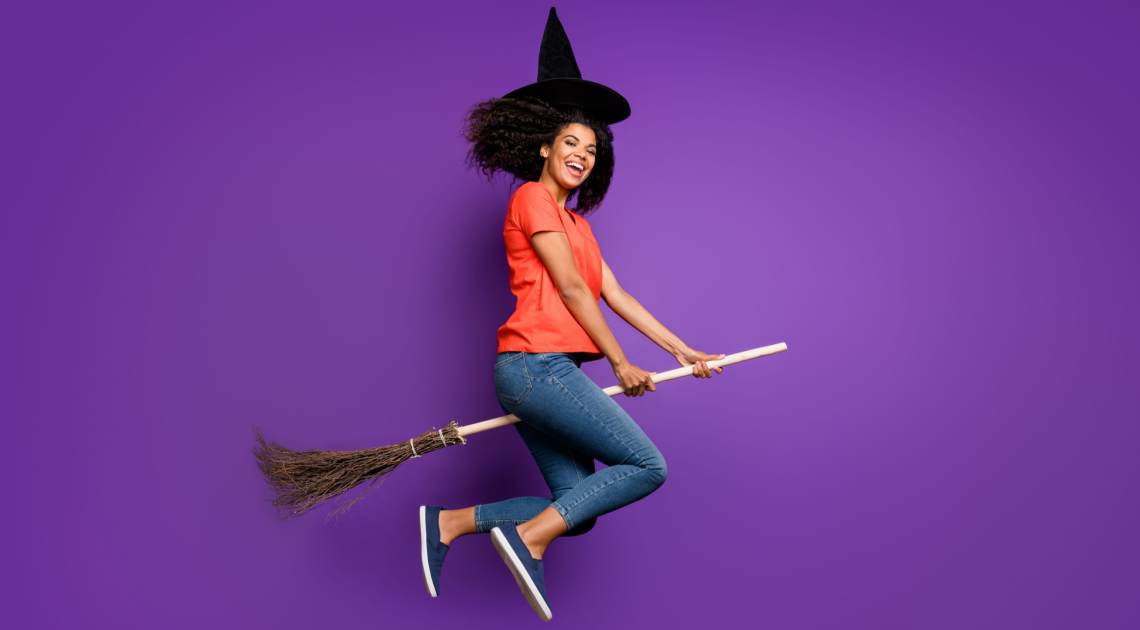 Witches are common stars of all manner of media, from books to TV shows and from movies to Halloween costumes. The thing about these varied takes on witches, however, is just how much they all have in common: long robes, pointed hats, magic wands, and general malevolence. Then, of course, there’s the traditional witchy mode of transport: the broomstick.

Broom flight has long been associated with witches. In the Harry Potter series, witches and wizards even play the now-iconic fictional sport of Quidditch on brooms. Presuming that magical peoples of legend could enchant other objects and use them to fly, though, why would they select broomsticks in particular? The reason, it seems, is that broomsticks have similar pagan roots to witches themselves!

The Prosecution of Witches

Historically, witches have been a source of much fear and prosecution. During the infamous Salem Witch Trials of 1692, for instance, colonial Massachusetts was rocked by a wave of vitriol, misguided terror, and hatred that saw 19 people condemned and hanged. Their indeterminate crimes were pardoned and money given to their families in 1711.

What exactly had the “witches” done wrong? In an age of superstition, fear, and suspicion, surely nothing. The fact was, those accused of witchcraft didn’t flit around on broomsticks in long, flowing robes. The threat, supposedly, was more subtle and insidious than that.

According to the BBC, Anne Boleyn was suspected of witchcraft because she allegedly “charmed” the infamous King Henry VIII using magic. Henry, presumably, simply lost interest in their relationship when no heir was produced, but it was a convenient excuse to have. 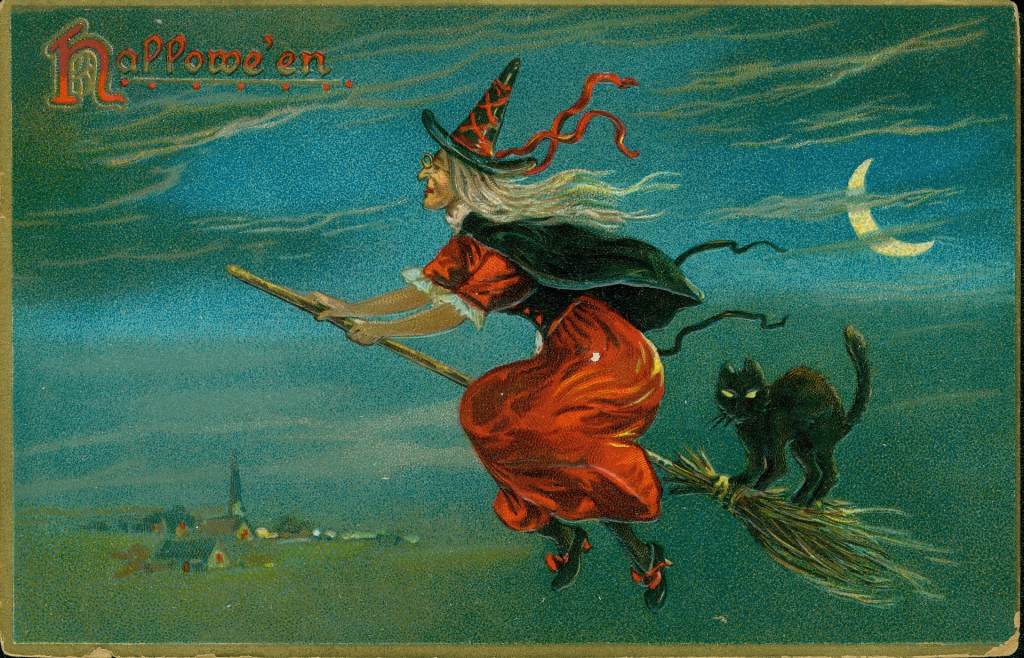 In the absence of a witchcraft charge, it’s safe to assume that Boleyn was never seen flying through the skies on a broomstick. The connection between seemingly malevolent magic and brooms, however, seems to lead back to a certain ritual of paganism, along with various other activities witches supposedly indulged in.

Needless to say, the development of human homes, houses, and habitats would have been rather closely followed by the development of ways to keep them clean. The trusty broomstick has long been a tool in our arsenal when it comes to doing just that, and as History reports, the word broom (a plant that was often used for sweeping) was derived from the word besom. A “besom,” over the years, has been defined as an unclean, unpleasant or rude woman or girl in Scotland, and all of these traits, along with broomsticks, remain associated with witches in popular culture today.

How Far Back Does the Link to Witches and Brooms Go?

Though we continue to use brooms to sweep our homes today, many of them are not of the traditional wooden design. Witches, however, have seemingly been flying on the latter models for a very long time. In 1451, Martin Le Franc published Le Champion des Dames.

The book depicts two women who don’t appear to need any such champion: The topmost figure rides upon what is clearly a broomstick, while the women below is mounted on a length of wood, though not one that can really be definitively seen as a broomstick. 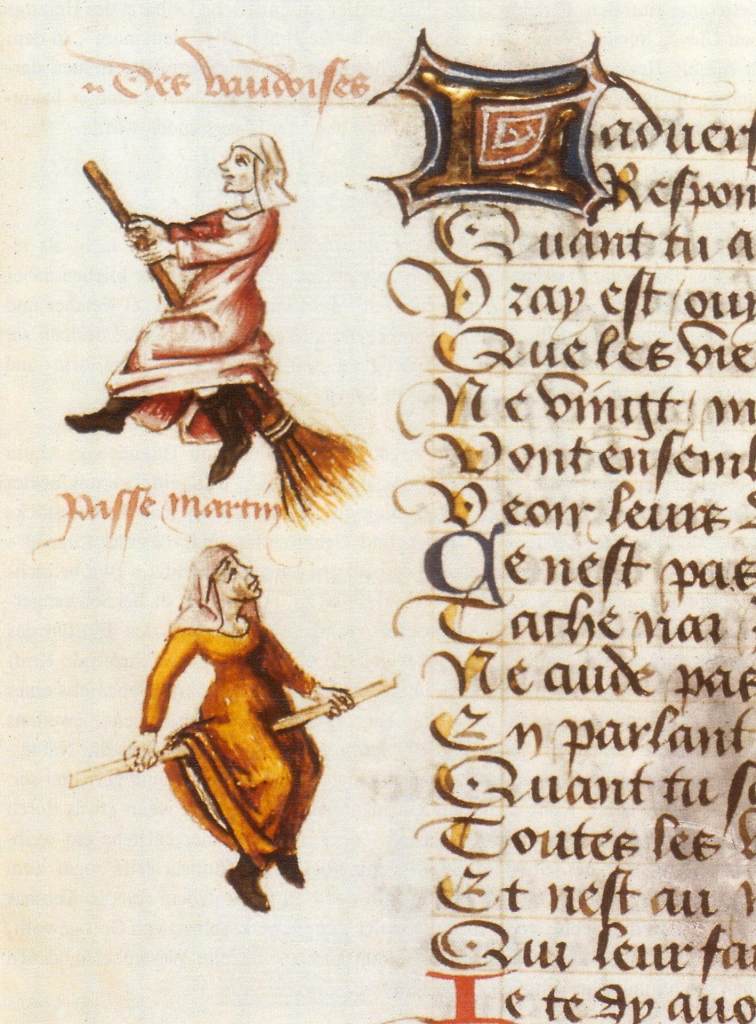 This appears to be the earliest known depiction of women riding on broomsticks, but the mystical and magical connotations are less clear. All that can be said for certain, with this particular image in mind, is that the riders are mounted in positions that will be very familiar to those who have any knowledge of witch-related literature. Here, though, the implication of the broomsticks in particular may have more of a sexual origin.

Witches were not necessarily magical, but their broomsticks appear to have been highly symbolic as both phallic images and signs of “proper” behavior, which is to say, keeping the home clean in the eyes of the patriarchy.

In this way, the broom highlighted what a woman supposedly should be, and what she shouldn’t. Embracing their sexuality in such a repressed world would absolutely have been controversial. Prior to the twentieth century, artistic interpretations of witches showed them nude, which would surely have heightened some of these links too.

There’s more to unpack about the association of broomsticks with witchcraft. Paganism has deep associations with magic and the natural world, and it seems that those mysterious broomsticks tie in with that very nicely.

The Discoverie of Witchcraft, a 1584 book from Reginald Scot, leaves the reader in no doubt as to the crucial elements of certain pagan rituals: “At these magicall assemblies, the witches never faile to danse,” Scot writes, adding that “whiles they sing and danse, everie one hath a broome in hir hand, and holdeth it up aloft.”

This, it seems, was a ritual to bolster fertility, which saw brooms and other such objects led through crops (which would hopefully develop bountifully as a result).

Scot seems to list many of the most iconic elements of witchhood: they are “magical,” they brandish brooms, and they are strictly referred to as women. This is not to say, though, that there were not male witches. Indeed, it’s reported that the first witch to confess to flying on a broomstick (a confession offered under duress, naturally) was a French priest named Guillaume Edelin, in 1453.

During Edelin’s time, there was an awful lot of suspicion and fear around those who didn’t behave as they were expected to. It was a time of both superstition and religion, and branding those who didn’t conform as dissidents or witches was a convenient way to discredit them. This notion, it seems, led to several of the iconic characteristics of witches, and brooms and broom flight are just one of them.

Next post Just a Number: Group of Skydivers Over Age 80 Break Record