Shoppers once stuck their feet in a radiation-emitting box to make sure their new shoes fit.

When was the last time you checked your shoe size? The Pedorthic Footcare Association recommends a fitting every time you buy a new pair. But let’s be real—21st-century shoe buyers don’t seem to prioritize regular “shoe fittings” into their busy schedules.

However, in the early-mid 20th-century, shoe fitting was not only an intriguing activity for adults and children alike, but it could be discounted as a “sight-to-see” thanks to the shoe-fitting fluoroscope.

Who Needs A Salesman?

When the time came for new shoes, customers did a bit more than peruse the aisles for a potential pair. Instead, they were asked to step onto a platform—often placed atop beautifully-designed cabinet-like boxes—and position their feet inside small recesses. An x-ray tube, ensconced in lead casing, lit the foot from beneath when a sales clerk turned the device on. Viewfinders on top of the cabinet allowed a look at the glowing skeletal foot through the prospective shoe, presumably showing how well it fit.

“You have to have been born before 1955 to remember them, but it was fun to see your own ghostly bones,” says Dr. Jacalyn Duffin, a hematologist, medical historian, and professor emerita at Queens University in Kingston, Ontario. “It was never a very good device,” she adds.

And while you could only see the front half of your foot from one angle, the device was definitely a marketing must-have, as Duffin and colleague Charles R. Hayter explains in Baring the Sole: The Rise and Fall of the Shoe-Fitting Fluoroscope—a study of the machine’s history. Stores were pressured to have the device to lure in customers and it “promised faster and more lucrative sales, not an accurate fit,” the study says.

The machine also played perfectly into the time of the “scientific motherhood trend.” During the early 20th century, rapid advances were being made in science, including social sciences, medicine, and communication. Mothers were being placed under a heavy spotlight to ensure that they were well-educated regarding new technologies and medical advice in order to raise their children healthfully. Easily influenced by science, medicine, and industrialization, the up-and-coming fluoroscope was an even hotter commodity. In fact, as stores installed these machines, companies recommended facing the fluoroscope machine toward the ladies’ and children’s departments where sales were heaviest, writes Paul Frame, a health physicist at Oak Ridge Associated Universities.

An Element of Health

In the 1920s, radium was seen as a source of better health and was used as an ingredient in products from toothpaste to pillows. It didn’t take long, however, for its dangers to become evident. In 1943, the International X-ray and Radium Protection Committee recommended .2R as the maximum daily dose of this substance—then lowered to .1R by the American Standards Association. R stands for roentgen, the unit by which radium is measured. 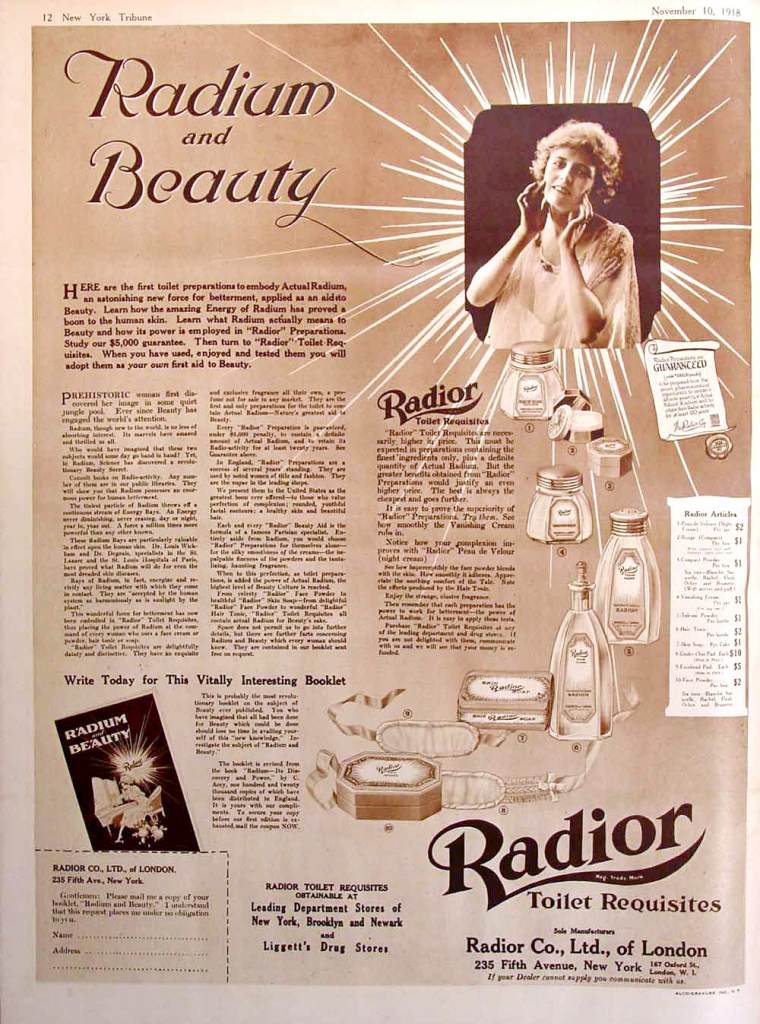 The output of the shoe-fitting fluoroscope wasn’t studied until 1948 when the amounts of radiation being emitted by the machines were varied and high. A survey of machines in Detroit, Michigan, showed that 43 out of 200 machines were throwing out way too much radiation—75R per minute on the high end. Stunted growth, cataracts, and sterility were among the ailments to which customers and clerks, who interacted with the machines routinely, were exposed.

No Longer A Good Fit

Warnings, articles, and further investigations into the dangers of the devices followed suit and customer opinions soon began to sour. 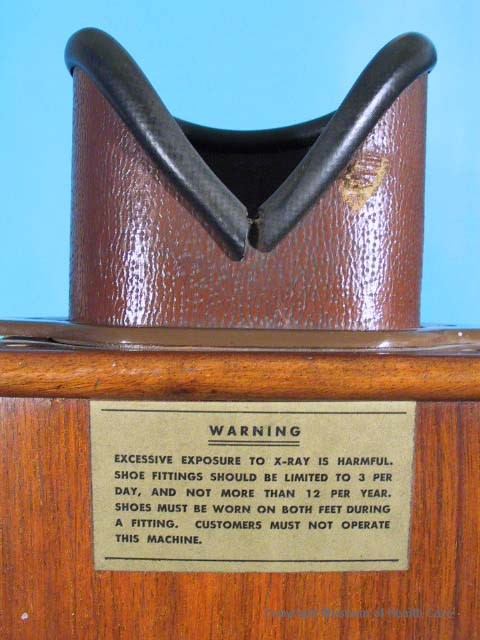 A pop culture illustration of that change can be found in It, Stephen King’s novel set in 1958. In this story, ten-year-old Eddie Kaspbrak remembers being 5 years old and climbing onto this inviting “desk” in the shoe store. His hyper-vigilant mom threw a fit, screaming about the machines causing cancer—one of the earliest adopted sentiments against the fluoroscope.

“People became afraid of them because of fallout scare, and they were no longer attracting people into stores, so stores got rid of them,” Duffin says.

Pennsylvania was the first state in the U.S. to ban shoe-fitting fluoroscopes and, in 1960, another 34 states followed suit. The devices stuck around in Britain and Canada, finally walking into history in around 1970.

And so these works of commercial art ended up decorating dumps, basements, and science classrooms. It took some time, but this was an x-ray device people finally were able to see through.

Next post Charlie McCarthy: The Dummy Only Dummies Didn't Listen To

Previous post Are Drones The Answer To Saving The Whales?